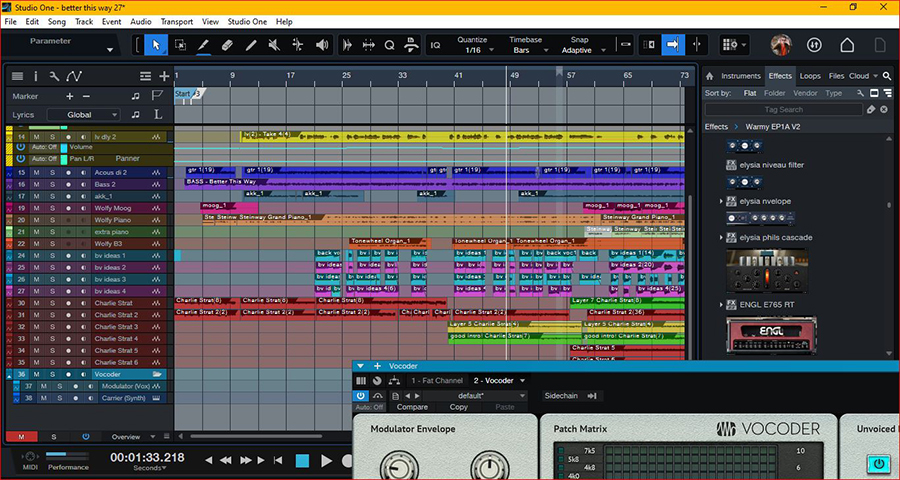 I’ve been a user of Studio One since its initial release in 2009. I thought it would be cool to review a different DAW than Vegas Video, my current choice at that time. I figured I’d gain some insights through tinkering with it over a protracted period of time. That period of time was about two weeks, which is when I moved over to Studio One completely and have never looked back.

Since that time, every new version has held some significant new features, from Melodyne integration in Version 2, to the performance and podcasting solutions of recent years.

Let’s talk about what’s new: at the top of my list is the new ProEQ3. This is a major rethink of their all-purpose track EQ plugin, adding dynamic equalization to its functionality, raising the “pro” level of its users’ creative tools quite significantly. This eight-band parametric equalizer includes spectrum metering to surgically hone in on problem frequencies. Adjusting each (solo-able) frequency band to taste already sounds amazing and the spectral display is top, uh…notch (sorry). However, ProEQ3 now allows you to compress specific frequency bands, this allows you to subtly nudge unwanted frequencies or resonances down as needed for a much more natural-sounding result. I absolutely love this new tool!

The other big plugin reveal is the new Vocoder. I’ve been interested in vocoders ever since their plugin versions started proliferating on the web, but I have never been able to replicate the Beastie Boys’ “Intergalactic” with one. After using this new toy? Nope, still not there. However, I did find a lot of killer tones in this thing and there’s a whole world of possibilities when you start using unusual sources to trigger it—like drums, sequencers, or sound effects. Cool.

The mixer itself got some refined functionality via the Fader Flip function, which gives quick visual feedback from your bus and effects sends. I know a few folks who’ve been waiting for this for some time! The new Pan Modes add Dual Mono and Binaural to the default Balance controls, for help with placing mono or stereo tracks.

A pretty big elephant in the Studio One room to now has been a somewhat lackluster Video Player. Novel video editing tools and intuitive import and export functions make welcome improvements, although the ability to fade in and out of the video track seems like an obvious omission. While I do hold to the opinion that greatly expanded video integration should be part of a future roll-out, a single video track and unlimited audio tracks, along with familiar audio processing make this a winner, regardless.

The Lyric Track is also introduced in Version 6. It works well and I can’t wait to see all of the ways it can be used and misused. Here, Presonus seems on the cusp of having the ability to generate lyric videos. A welcome refinement that I hope lies on the horizon.

All of this shows Version 6 of Studio One to be a solid upgrade, with an eye toward an ever-widening vista of its users’ desires. The introduction of Logic/Garage Band-like Track Icons will be welcomed by those who dig that paradigm, while the OGs like me can stay with the standard interface. Podcasters and other content creators will love the ability to utilize new Smart Templates, various setups that get you up and running as quickly as possible, for just about any task at hand. They’re created for specific things like podcasting, recording, rehearsals, live gigs or anything you can imagine. Track Presets and interactive tutorials guide you through song setup. Additionally, users now have the ability to customize their workspace to the particular task at hand. This is accomplished by showing or hiding different functions within the Toolbar, Inspector, Transport and Browser areas. This simultaneously reduces clutter and facilitates a more personalized ergonomic workflow; a move that not only casts Studio One as a pro level time saver, but a creative partner as well.

Beyond that lies a host of other products that supercharge Studio One’s functionality by “partnering” with other products, like Presonus Sphere (a future topic), which features a wealth of resources like Workspaces that encourage collaboration among the Studio One users’ community. Or peruse through a veritable potpourri of free loops, sounds, presets, instruments, samples, keyboard shortcuts, color themes, and more. Add to that an enormous amount of video and other educational content that can address just about any Presonus product-related question and you can see all that value stacking up. There’s even a new free Presonus Sphere App, which puts all that self-edification right at your fingertips, via your smartphone!

It seemed at first that this latest Studio One update might not have seemed as significant as past versions, but now I see its waters run deeper than they first appeared. It just keeps getting better!

Luck of the Irish