San Diego’s burgeoning acoustic/singer-songwriter scene was already in full swing by the summer of 1995. The swell of talent that spilled out of Java Joe’s tiny little storefront coffeehouse was becoming a veritable tidal wave. You almost couldn’t get away from it.

One day, I visited my friend Wayne Preis’ apartment in Pacific Beach and noticed they’d opened a new coffeehouse, just a half a block away. I had a few minutes to wait, so I decided to check the place out.  “Welcome to the Innerchange!” called Nancy Porter, the harried multitasking woman behind the counter. I smiled…mostly just out of politeness, because I barely heard a word she’d said. There was a storm blowing through the room just then, and its name was Mary Dolan. 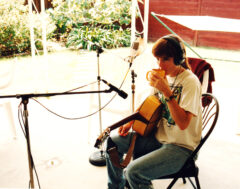 Mary’s voice seemed to be literally shaking the walls around us as she ripped through “Me and Bobby McGee” by request. More than anyone I’ve heard, Mary owned that song. I mention this because I’ve only ever enjoyed Mary’s delivery of it. Husky-voiced young women will be filling that request for years to come, but in Mary’s hands that song became a weapon of empowerment, a way to let you know you weren’t messin’ with just any girl here.

I had to meet her. After 20 or so minutes, she and her guitar player took a break. I walked quickly over to her and explained that I needed to leave, but did she have any CDs for sale? She handed me a CD that was a four or five-song demo, along with a business card. I followed up at a gig where Mary was performing a couple weeks later. Mary didn’t perform that night as much as she detonated. It was that same power I’d witnessed previously, but 10 times more ferocious, as if her songs were lion cubs and she the lioness. She growled and slashed. Words like “balls” and “ovaries” and vows to “Break these strings if I have to, just to make you hear” flew through the air, painting the walls a whole different color. She was, I said later, “For real, for real.” 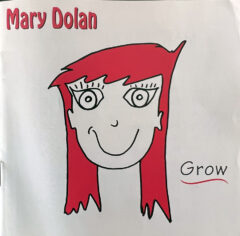 We became fast friends. On one occasion, I’d been recording a song that I felt might work as a duet and called her, wondering if she might consider singing on it. She was there the next day. Killed it in two takes! That single, “Wait…” appeared on a SLAMM magazine compilation—my album Passion’s Little Plaything and Mary’s own Grow.

Mary, Wayne, and I spent some time considering her songs and how her recording’s arrangements might sound. It was during this time that we could really see not only how intensely driven and musically ready Mary was at that time, but what a total goof she could be! Her laugh was contagious and her facial expressions mischievous. I found her hilarious. But when we got down to the business of recording that first album, Grow, we forged a solid partnership characterized by the enormous amount of trust and generosity that Mary showed throughout the somewhat unfamiliar process.

She had begun working with a rhythm section: Jason Langton on drums and bassist Joe Hilgeman, and they feature prominently on the rockers on the album: “Heroin,” “Marsha Brady,” “Why Don’t You,” and most notably the previously quoted “Everything/Nothing.” That core trio nailed down those grooves with real authority, and their dynamics were excellent; all they had to do was follow Mary.

The next phase of the album was to lay down versions of Mary’s acoustic guitar and vocal performances on the other songs. “Leaves” featured horns played by Brian Grondell on trumpet and Roger Long on trombone. I remember not being happy with the sound I was getting at first. It was too bright, too present. So I had them turn their backs to the mics and face the wall, which imparted this really sad feel to the texture, as did doubling the trumpet with a Harmon-muted version and adding another trombone. Mary’s vocal on this is so present and yet so vulnerable. I remember marveling at her ability to bring that kind of intensity into such an inherently fragile moment.

Mary, in action. From the Jefferson Jay archives.

“Marsha Brady” was a really fun one to record, just in trying to capture that wacky side of Mary and have it still work in a musical way, too. I cobbled together all of those Brady Bunch snippets from the Brady Bunch Movie, actually. The internet wasn’t as big then as it is now!

There was just so much trust shown to me as a fledgling producer throughout that time. I wrote a song that I thought would be a fit for Mary. I asked her if she would consider doing it and she jumped right in. That doesn’t happen often/ever. She even included it on this album!

There are so many other things that could have escaped inclusion if Mary were less brave as an artist, like the incredible guitar parts solos from both Wayne Preis and John Katchur, adding songs she didn’t write, the use of loops and samples at times, and, mostly, the ability to think outside the box and encourage others to as well.

A perfect closing example is this one: Her song “Black Border” is a very somber, quiet affair. It deals with some darkly sensitive subject matter, especially in light of her passing. During the recording of that song, the summer heat was oppressive and we had no A/C, so we tracked in the evenings as things cooled down. This meant that the sliding glass doors adjacent to the patio were left open. It all worked well until we noticed the crickets were getting picked up by the mic and noticeably coming through. No matter what I did, I couldn’t totally eradicate our chirpy guests from the background, totally. After some thought, I re-recorded the crickets, but on purpose this time, and laid together a little rhythm track from the crickets. It added vibe and at the same time masked the “leaking” of the “actual” crickets into the vocal track. This allowed us to use this riveting vocal performance, without worrying about any six-legged distractions.

Mary went on to be nominated for a 1996 San Diego Music Award and invited Wayne and I to perform with her band on stage at the awards show. I remember having the most fun, just celebrating the culmination of that whole chain of experiences leading to that moment, and that in that moment, she never overlooked us or left us out. Ever.

Mary led by example. This is the highest praise I know to give any human being. As a friend, she loved with her whole heart, a heart bursting with love, passion, compassion, and forgiveness.

I’ll tell you here, because she wanted you to know: “Falling leaves made her cry.”

Sven-Erik Seaholm is a singer, songwriter and record producer. His new album Oxford, Comma (read the review in this issue) drops on Wednesday, November 16, at Humphrey’s Backstage Live. The album release event runs from 6-9 pm and features openers Calamity and Joey Harris. https://www.ticketmaster.com/sven-eric-seaholm-san-diego-california-11-16-2022/event/0A005D328E6617B1