January 2023
Vol. 22, No. 4
Big Kitchen: The Musical Returns to San Diego! by Paul HormickJune 2017
Back with a Bang! Java Joe's Reunion at San Diego Folk Heritage by J.T. MoringJune 2017
Book Review: The Philosophy of Modern Song by Bob Dylan by Ted BurkeJune 2017
Rick Nash: Bass Man in Demand by Wayne RikerJune 2017
If Music Be the Food of Love, Play On: Dually Noted Pairs Fine Food and Fine Music by Paul HomiczJune 2017
Mod Revivalists the Trebels to Reunite for 40th Anniversary Show by Jim TrageserJune 2017
Harold in the Land of Jazz by Bart MendozaJune 2017
Sephardic Dance and Music by Yale StromJune 2017
Loretta Lynn: A Special Tribute to the Queen of Honky Tonk by Terry Paul RolandJune 2017
Ben Grace Gilmore: It's All About Building Community by Sandé LollisJune 2017
Advertisements 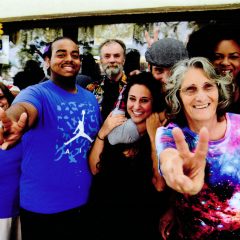 Judy Forman (right) with cast of Big Kitchen: The Musical

Judy Forman hurries from table to table, checking on the breakfasts of the outdoors diners. It’s Sunday, and the Big Kitchen is packed. She pauses ever so briefly. “We’re going back on Broadway!” she says as she seats folks at a table.

Forman is talking about The Big Kitchen: A Counter Cultural Musical, the stage production inspired by her 37 years of being the proprietor and spiritual maven of the Big Kitchen, the breakfast nook and cultural hub of the neighborhood of South Park.

The musical draws on the experiences of the cooks, waiters, and regulars who have been part of life at the Big Kitchen over all these years. To gather material, the producers interviewed dozens of people who have been associated with the restaurant. As Forman and her restaurant have been at the forefront of all of our cultural movements over the past four decades, the songs give us a history. “If I” reminds us of the initial shock and fear we experienced with the initial AIDS crisis. Women’s liberation and the sexual revolution get their treatment with the saucy “We Was Humpin’.”

In this incarnation The Big Kitchen is getting an update. Aspects are being added to the production to make for a more compelling story.

Before we go on, let’s clear up a misconception. In a Troubadour profile of Forman back in November of 2015, the impression was given that Forman was retiring from the Big Kitchen. Nothing could be further from the truth! The closing of the Big Kitchen is fake news!

This journalist, who wrote that original story, apologizes, dear reader. I had no intention of being a Bright Bart or Faux News. The Big Kitchen remains, as does Forman. “I’m not leaving!” Forman assures her patrons.