January 2023
Vol. 22, No. 4
Remembering Lou Fanucchi by Elizabeth SchwartzJuly 2017
Back with a Bang! Java Joe's Reunion at San Diego Folk Heritage by J.T. MoringJuly 2017
Book Review: The Philosophy of Modern Song by Bob Dylan by Ted BurkeJuly 2017
Rick Nash: Bass Man in Demand by Wayne RikerJuly 2017
Mod Revivalists the Trebels to Reunite for 40th Anniversary Show by Jim TrageserJuly 2017
If Music Be the Food of Love, Play On: Dually Noted Pairs Fine Food and Fine Music by Paul HomiczJuly 2017
Harold in the Land of Jazz by Bart MendozaJuly 2017
Sephardic Dance and Music by Yale StromJuly 2017
Loretta Lynn: A Special Tribute to the Queen of Honky Tonk by Terry Paul RolandJuly 2017
Ben Grace Gilmore: It's All About Building Community by Sandé LollisJuly 2017
Advertisements 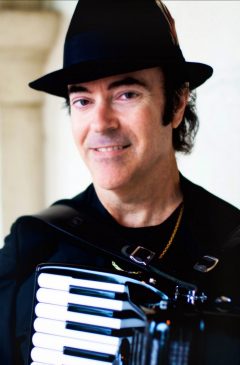 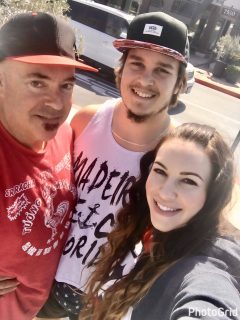 Lou with his children, Dante and Lauren. 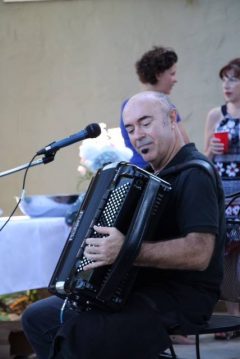 Lou at a recent concert

In 1996, I was determined to do whatever I could to get out of a gig. Specifically, it was a concert at LA’s Museum of Tolerance, and it was my first. Bandleader Yale Strom had exerted an inordinate amount of pressure on me to sing a few numbers–in my newly-acquired Yiddish–with Hot Pstromi. After I reluctantly, grudgingly even, agreed, Yale broke the news to the band: Fred Benedetti on guitar, Tripp Sprague on reeds, Jeff Pekarek on contrabass, Yale himself on violin, and Lou Fanucchi on accordion. The initial reaction to news of my guest appearance ranged from indifferent to what remains my favorite observation: “Yale” [deep sigh], “when they want to sing, you just have to let them.” I was so intimidated to sing in front of these amazing musicians, I forgot to be nervous about the audience. After the first number, I turned around and locked eyes with Lou. He gave me a big grin and nodded. I had an ally.

Lou’s opinion meant everything to me because he was a genius. I’ve never seen anyone absorb the subtleties and emotions of a new chart as quickly and as profoundly. During my two decades of singing with Lou, I could completely relax, knowing that he was really listening, instinctively pushing the chords and tempo I needed at a precise moment, which fills around my phrasing made me sound better, and creating spontaneous dialogues with me. And Lou did this in myriad genres: Classical, Latin, Italian (of course), Cajun, klezmer, jazz, and even bangra-inflected Southeast Asian rock jams. He played them all as if they were his sole genre of expertise. Some of my favorite moments on stage included turning to watch him, head bent to the side, tongue sticking out, ripping through solos. He never ran out of ideas or runs, he was invariably tasteful, true to the idioms of a genre, tireless and inventive. Even now, I can hear him launch into a story backstage, starting with, “Listen, check this out…”.

We toured around the U.S. with Lou. Our bandmate from New York, the virtuoso accordionist Peter Stan, came to San Diego to duet with Lou. I’ve seen Pete turn away from a performance (all over the world) with a little frown and say, “I can’t stay here, it’s cold”. I’ve seen him almost in tears if a musician was unpleasant. When he met Lou, it was as if the rest of us melted away and they were on an island together. “That Lou guy?” he said. “He’s the real deal.” There was no higher praise. Pete and Lou were brothers from then on. Lou was certainly one of the best accordionists on the West Coast. I can say without reservation that had things worked out for Lou, he would have been one of the best accordionists on the planet.

There are a lot of people who believe that an artist has to experience pain to plumb those depths of emotion in the music. Lou made a good case for that argument, because he was ravaged by emotional pain. He self-medicated. His struggles started to affect his playing and his relationships with his colleagues. Other musicians would say, “Yale, we love playing your gigs, because we get to play with Lou… but we can’t hire him anymore for our own gigs.” These are guys who loved Lou, but who need to work and couldn’t afford to lose more and more gigs because their accordionist didn’t show up. And it affected our band, too. Yale’s solution was to give up leader pay and hire an extra musician for the “middle.” If Lou showed up for the gig, the concert would be even more extraordinary; if he didn’t, the audience would never realize anything was missing. I have to write candidly that the suspense was harrowing. If he didn’t show up, we were heartsick. And if he did, we were ready to weep with relief.

All of us operated under the basic premise that it was a privilege to play with Lou, that he was a genius, and that we loved him as a bandmate and as a person. We knew that the only thing we could do for him was to try to remind him of what and who he was as often as he would let us. Separate from his music, the centers of his heart were his kids, Lauren and Dante. He was humble about himself, but burst with pride whenever he talked about them… which was all the time. But love, respect, support, encouragement, and (I confess) mom-style occasional scolding were no match for his pain. Lou’s story–a great human with gargantuan artistry who destroyed himself–would move someone who didn’t know him. For those of us who did, there aren’t enough words to express the ongoing feeling of loss. There is always someone missing for us, on stage and off.

Lindsay White Is Ready for the Main Event