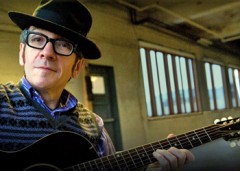 Elvis and the Attractions, late 1970s.

When Declan Patrick MacManus was born in a London hospital in 1954, he was welcomed into the cradle of great musical traditions and pathways. It would be a road he would spend his life traveling. His mother, Lilian Alda, was a native of Liverpool, where, soon enough, John Lennon and Paul McCartney would soon meet. Declan’s Irish father, Ross MacManus, was a renowned songwriter, trumpeter and vocalist who would come to love Elvis Presley and the Beatles as much as he did his own blend of vocal jazz. In 1972, when he was 18 years old, his father recorded Presley’s Golden Hits Sung by Big Ross & the Memphis Sound.

But, when Declan Patrick was born neither Elvis Presley or the Beatles had been conceived as pop-rock icons. Rock ‘n’ roll, in fact, was nowhere to be found on the shores of England in 1954. However, a musical revolution was on the horizon for the Irish-English infant.

Twenty-two years later Declan would honor his famous musician father by adapting Ross’s stage name, Day Costello, and merging it with, the American singer he loved: Elvis Presley. So, in 1977, as he stood at the threshold of rock music success, Declan Patrick MacManus became Elvis Costello.

The name change, along with the intensity of music he was creating during that year, sealed his artistic achievements on the pages of rock history along the way.

Today, as he embarks on the Detour solo acoustic tour–stopping on April 7 at the Balboa Theater in downtown San Diego–he brings with him a long legacy of pop success, experimental innovations and collaborations that have helped to enlarge rock music’s vocabulary over the last five decades.

Elvis Costello’s musical landscape has been vast. But, it’ has also been deep. He’s not been a tourist in the genres that gave him his creative fires. He has dug deep into the caverns of jazz, folk, blues, early rock ‘n’ roll, punk, new wave, country, and Americana to find his own treasures.

After his childhood, which was spent soaking in his father’s success, Costello began with a folk duo called Rusty while he was still in high school. The musical progress would follow in quick succession to a London pub rock band called Flip. All the while he was dealing with the varied musical voices streaming through his head: Duke Ellington, Louis Armstrong, the Beatles, Elvis Presley, Hank Williams, George Jones, Eddie Cochran, Gene Vincent, and the psychedelic pop of the late ’60s. All of it flowed out from him unforced, in original songs that were as challenging as they were accessible. Today we look at “Watching the Detectives,” and “Every Day I Write the Book,” as standard rock classics. But, when they were first released, something new was being created in the world of rock ‘n’ roll. With rapid fire lyrics that carry a Lennon-esque whimsy and music that jumps and bounces over unusual scales and melodies, his music blossomed until an independent London label, Stiff, signed him on the basis of a cassette demo recording.

By 1977, he released his landmark album of the post punk, new wave ’70s rock era, My Aim Is True. Great artists will absorb their times and create something original. Elvis Costello came through late ’60s rock, pub-rock, ska, punk, and into the new wave music of the late ’70s. His debut album is as a good a beginning as has ever been produced in rock ‘n’ roll history. On this album he skillfully executes lyrical pop tunes with a punk attitude, buoyed by the best in rock ‘n’ roll instrumental work. But, he proved to be an enduring artist, not a one-trick-pony as too often has happened in rock ‘n’ roll success stories. It was only the beginning.

Making Punk-Rock History on Saturday Night Live
It wasn’t long before Costello demonstrated his punk credentials when he was invited to play Saturday Night Live in December 1977. He was told not to play his own choice, “Radio, Radio,” about the commercialization of music on the radio and the radio ban on punk rock. Rather, the record company wanted him to play the title track from his new album and first single. As Elvis and the Attractions launched into “Less than Zero,” after a few bars, Costello stopped the band and said, “Stop! Stop! Stop! There’s no reason to play that song!” Then, he began playing “Radio, Radio.” As a result Costello was banned from the show until 1989. He later said that the move was inspired by Jimi Hendrix’s appearance on a London television show broadcast in the late ’60s just after the announcement that the blues-rock trio, Cream, had broken up. The show insisted Hendrix play his hit, “Hey Joe.” Hendrix interrupted the song and began playing Cream’s “Sunshine of Your Love,” saying, “There’s no reason to play this song,” and dedicated his performance to the band. Elvis Costello has always been inspired by great moves and by great music.

Over the years his collaborations have defined him as much as his solo work. As early as 1977, Costello made no apologies for his love of country music as he made a guest appearance on George Jones’ album of duets on a song called “Stranger in the House.” Later, he collaborated with the rock band Squeeze. In 1984 he worked with Daryl Hall on a solo album. In 1985 he worked with the Eurythmics on the song “Be Yourself Tonight.”

His most well-regarded collaboration today is his 1987 work with Paul McCartney on the1987 B side “Back on my Feet.” Their work together during this period was so prolific that it would result in gradual releases over the years, including McCartney’s 1989 Flowers in the Dirt album with songs like “My Brave Face” and “You Want Her Too.”

In the ’90s Costello worked with Tony Bennett on an interpretation of “They Can’t Take That Away From Me.” In 2005 he managed to collaborate with Allen Toussaint and Green Day in the same year. Through the years he has collaborated with a diverse group of artists demonstrating the range of his work and his appeal, which knows no genre boundaries. This has shown up in the world of opera, classical music, Broadway plays, Americana-roots music, and jazz.

In keeping with his family ties with jazz, in 2003, he married jazz vocal/keyboardist Diana Krall. They were married at Elton John’s estate. Today they have twin boys and a happy marriage.

In 2005, he reconfirmed his love of jazz in collaboration with Marian McPartland on her recording of Piano Jazz, which had him singing jazz standards as well as his own songs.

If his jazz connections have been apparent through the decades, his Americana-roots work has encompassed his own solo work, which has driven many of his collaborations. His 2005 recording, The River in Reverse, with Allen Toussaint and produced by Joe Henry, exhibited a bridge between his Americana and jazz roots. In 2014, he was a key contributor on the famed Lost on the River: The New Basement Tapes with Rhiannon Giddens, Taylor Goldsmith, Jim James, and Marcus Mumford. The collection of unpublished Bob Dylan lyrics found Costello a new and growing audience for a new generation of Americana fans.

Probably most important to Costello as an artist and a writer, displaying the breadth of his musical circle over 40 years, is his association with American pop songwriting great Burt Bacharach. In 1978, while on a label package tour, the Bacharach/David standard “I Just Don’t Know What to Do with Myself,” was recorded live and performed by Costello. It was an unusual move for an artist associated with the punk and new wave music of the day. But, Costello was intent on creating a new normal as a musician and artist. He has always broadened the musical road he has traveled.

So, by 1998, it was not unusual for Costello to collaborate with Burt Bacharach on the acclaimed album Painted from Memory. They performed several concerts together with a full orchestra. The unlikely pair also appeared together in Austin Powers: The Spy Who Shagged Me, performing the classic “I’ll Never Fall in Love Again.”

Now, in 2016, Costello comes full circle with an acoustic solo tour, continuing as he had begun in high school–with just a guitar in hand. He also brings with him new songs from recent collaborations with Rosanne Cash and Loretta Lynn, singing duets with both artists. As his road continues, he continues to find ways to stretch the musical horizons, just as he did with Elvis and the Beatles on their way further down the road. Today, new music is still being discovered by this vital artist.

DakhaBrakha: From Kiev to San Diego