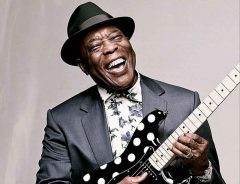 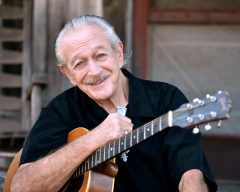 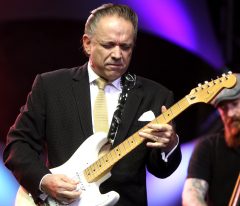 Buddy Guy, Charlie Musselwhite, and Jimmie Vaughan load in to the California Center for the Arts in Escondido on Thursday evening, August 8th for a master class in the blues. It is a rare opportunity to see and hear three of the most influential bluesmen walking the planet today. Their accomplishments read like the who’s who in blues and their credentials are wrapped in Grammy, Blues Music, Hall of Fame and Lifetime Achievement awards.

Individually, they all began their musical journeys early, honing skills while receiving their advanced educations in the music they love, sometimes directly from the originators. You hear the geographical influences in their style of play and in the blues they perform. Buddy Guy combines his Louisiana roots with a Chicago edge, while Charlie Musselwhite brings a harp full of the Delta and Chicago, with a romp through San Francisco’s Summer of Love. For Jimmie Vaughan, it’s Texas with a heavy Austin influence and a love for the three Kings; Freddie, Albert, and B.B… and maybe a little T-Bone Walker for good measure.

They are old-school journeymen and combined, they have been keeping the blues alive for more than 225 years. Along with their bands, all three continue to record regularly and tour heavily at a pace only passion could fuel. Performing live is a way of life for these three artists; they’ve appeared alongside generations of musical talent and they’ve done it on the world’s most prestigious stages.

Buddy Guy
Buddy Guy is the blues elder of the three and, at 82, is a living, breathing American legend. Rising from a share-cropping family in Louisiana to gain fame as a blues guitar icon, Guy has been honored at the Kennedy Center and played in the White House. Ask any rock ‘n’ roll baby boomer to describe the music of Buddy Guy and the air quickly turns blue with superlatives. Jeff Beck, Stevie Ray Vaughan, and Jimi Hendrix all paid homage to Guy’s abilities both in live performance and on recordings. Eric Clapton called Guy simply ‘the best guitar player alive,’ but it was Jimmy Page who probably summed it up for an entire generation when he referred to Buddy as ‘an absolute monster.’

Guy has now outlived most of his peers and says, “I wake up and all the great blues players are no longer with us. Muddy, Wolf, B.B., they’re all gone.” Buddy then adds, “Before they passed away, when they were in their prime, we used to have a drink and a laugh and talk about how when one of us is gone, the others have to keep it going. I’m trying to do something to keep this music that I love so well alive.”

A man of his word, Buddy is currently touring behind his eighteenth solo release, The Blues Is Alive and Well. Awarded the 2019 Grammy award for Best Traditional Blues Album, it features a host of friends, with special appearances by Mick Jagger, Keith Richards, Jeff Beck, and James Bay. Along with drummer/ songwriter/ collaborator Tom Hambridge, Buddy continues to churn out blues for the 21st century and says, “Working with Tom is like, he comes in with a pad even when were holding a conversation and tell me, ‘Man, every time you talk you’re writing a song.’ He takes me in the studio and says, ‘This room belongs to you, now.’”

The bottom line is in the productivity, and Guy feels more creative today than five decades ago when he was the go-to guitarist working with Willie Dixon at Chess Records. “I never had the freedom in those early days as I’ve got now with Tom.” Lucky for us, the man shows no signs of slowing down.

Charlie Musselwhite
A life on the road probably felt natural to Charlie Musselwhite, considering the well-worn Natchez Trace ran right through his Kosciusko, Mississippi family home. A life in the blues called out to a young Charlie as he lay along the shady side of a creek bed. “I remember listening to people singing in the fields as they worked. It was the prettiest music I ever heard and it sounded just like I felt. And they were singing the blues.”

While living in Memphis, Charlie would spend time on the front porches of Will Shade, Gus Cannon, or Furry Lewis’ house. “I would hang around their houses all the time,” Charlie remembers, “listen to the radio, the ballgame, or something. And there would be spontaneous jam sessions and I would be playing right along, you know?”

The world was changing in the ’50s and thanks to Sam Phillips and the Memphis Recording Service/Sun Records, music was, too. Memphis was about to become ground zero for something totally different. “The Killer was always around: Jerry Lee Lewis. He had this orange and red convertible Lincoln and I used to see him tearing up and down the streets.”

Mentioning another local up-and-comer Charlie would occasionally run into, he says, “I used to see Elvis. He would rent the Memphian Theatre after hours and show all the latest movies. Sometimes he would rent the whole Memphis fairgrounds, from midnight to eight in the morning. All the rides would be free. People would just roam around and have a good time. He would say hi to me, although I never talked to him about music or anything. But he recognized me as one of the group that hung around…Probably wondered how I got in there. [Laughs]”

After moving north to Chicago, Charlie’s love and admiration for the blues and those who played them, intensified. “Man, it was such a thrill to walk into a club and see Howlin’ Wolf for the first time. The power that he emanated was just awesome, and the band was… I was just slack-jawed. I couldn’t even drink my drink. I was just glued into what was happening.”

In 1966 again, the road beckoned. “I got off the plane in California. It was sunny; people were nice… they were smiling at you, friendly and courteous. I didn’t believe such a place existed. [laughs] It was really a culture shock.” Charlie says. “The free love and people wearing flowers in their hair. Janis Joplin was around. We hit it off great, because she liked to drink like I did. We had some real good times together. Meeting different musicians and playing different kinds of music.” Charlie adds, “It was just great times, you know?”

Those great times continue for Musselwhite fans around the world. Now six decades and 25 albums later, Charlie is still on the road, touring, recording and seems unstoppable when he’s got a harp in his hands.

Jimmie Vaughan
Most of us found out about Jimmie Vaughan in the late ’70s when he came to national attention with the Fabulous Thunderbirds. Along with harmonica sensation Kim Wilson, the Thunderbirds placed Texas blues squarely in the spotlight of popular music, regularly climbing U.S. Top 40, Billboard Hot 100, and Rock radio charts.

After leaving the T-Birds in 1989, Vaughan teamed up with little brother, Stevie Ray and producer, Nile Rodgers and gave us Family Style. A bittersweet project for fans world-wide, rewarded with two Grammy awards that, tragically, the younger Vaughan brother would not live to see.

Now some 30 years, thousands of miles, eight individual and 15 collaborative recordings later, Jimmie Vaughan is a man in constant motion. His current summer tour with the Tilt-a-Whirl band has him hop-scotching across the U.S., playing sold-out shows and festivals. Vaughan recently returned to his roots, headlining this year’s 44th anniversary celebration at Austin’s home of the blues, Antone’s. Earlier this year Vaughan and his band opened three nights in London for friend Eric Clapton at the Royal Albert Hall and is scheduled to appear next month in Dallas at Clapton’s Crossroads Guitar Festival.

Almost simultaneously with his performances in the U.K., Jimmie released his latest project, Baby, Please Come Home. It is a recording that not only pays soulful respect to the music of blues greats like Jimmy Reed, Clarence “Gatemouth” Brown, and T-Bone Walker but also shares love and affection for a number of country music legends, like Lefty Frizzell and Lloyd Price. “I am a big fan of the music,” Vaughan says. “And I can’t believe I get to play it! I have the world’s greatest job!” Even in his bio Jimmie relates, “Playing what you feel has always been my main goal. I didn’t really pay much attention to categories of music. I just heard what I liked and decided to explore that. And that’s really what I’m still doing.”

Jimmie Vaughan continues to play the music he loves and does it with his own style and grace… and, as far as sharing the stage with Buddy and Charlie, he says, “It’s an honor to be on these shows with a couple of my heroes who I’ve been listening to for a long time. I look forward to sharing the stage with them and playing with them. It’s always a treat when that happens.”

Three masters, one stage, one night of blues under the stars. The last word comes from Charlie Musselwhite as he spoke about his long time friends. “I’ve known Buddy over 50 years and Jimmie since the ’80s. We all know and respect each other in a big way. I’m sure it’ll be a great night for any music fan… and especially for blues fans.”

The Legacy of Tony Bennett

For Sara Watkins It’s All About Family