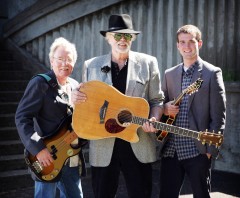 Dan Crary may not be a household name to many folks today. That is, unless you’re a bluegrass fan or a student of acoustic guitar. Then, hearing his name conjures up the sound of some of the most eloquent and well-executed flat-picking on acoustic guitar imaginable. Beyond that, Crary is among one of the few who helped develop a unique style of picking lead guitar melody on the acoustic instrument with a single guitar pick. Flatpicking is what it came to be called. He’s in good company with artists like Doc Watson, Clarence White, and Tony Rice, who are more his peers than his mentors.

It started with the rise of bluegrass music. It’s easy to forget bluegrass is a relatively new genre of music. While music scholars pinpoint different significant artists and dates as landmarks and origins for the music, no one argues with the importance of Kentucky musician Bill Monroe as a key originator of bluegrass. It happened in 1939 when Monroe formed the Blue Grass Boys. But, from 1939 to 1946, Monroe’s music consisted of gospel and blues and it was essentially considered mountain-hillbilly music. But, in 1946, Monroe put together the banjo of Earl Scruggs, the guitar and vocal of Lester Flatts, along with the stand-up bass of Howard Watts and Chubby Wise on fiddle to create a sound centered on high lonesome vocals and a solo for each instrument, called a breakdown. This in itself was new to mountain-hillbilly music on stage. IT would soon become known as bluegrass, named after the home state of Bill Monroe.

For decades the guitar was considered an instrument only for rhythm players. To allow the guitar a solo was a novelty in ’30s and ’40s mountain music. Even so, important musicians like Riley Puckett and George Shutter began to break through the problem of keeping time and melody together with the guitar as a lead instrument. Most old-time music enthusiasts and guitar students know Maybelle Carter worked with melody and scratch rhythm while Merle Travis developed the well-known Travis pick with little emphasis on melody. Maybelle Cater’s innovations were soon picked up by Chet Atkins and Lester Flatts among many others. But, the main difference was that most players and pickers influenced by Maybelle Carter depended on the use of their fingers and/or fingerpicks for their playing. However, the flatpick is strictly he use of a guitar pick struck on steel acoustic strings. It had been used extensively in jazz by artists like Django Rhinehart. Lee Griffith, on his blog site Flatpick Post, further defines the flatpick, “The use of a flatpick, which is usually made of plastic, nylon, or tortoise shell, provides a much crisper, brighter sound than the use of fingers. Personally, I don’t think there is anything that is able to bring out the full dynamics of an acoustic guitar quite like a flatpick.”

Slowly the acoustic guitar began to work its way into those bluegrass breakdown jams of the late ’40s and ’50s. But, it would develop most extensively in the ’60s when the folk music movement began to infiltrate the country. By the time it moved through Nashville and eventually to California, young mandolin pickers like Chris Hillman could say about the early ’60s, “Back then real surfers didn’t play rock ‘n’ roll, real surfers played bluegrass!” This was the time when Doc Watson on the folk music circuit and Clarence White at bluegrass festivals would take flatpicking to new heights. On Doc Watson’s recordings and the Kentucky Colonels with Clarence White and his brother, Roland on banjo, new standards were bringing rhythm and melody lines together on the acoustic guitar.

The class of the ’60s included Dan Crary, who was born in Kansas City but spent his college years in Louisville, Kentucky working toward a PhD in philosophy and developing his bluegrass guitar technique. In 1970 he released the first full bluegrass album built around the acoustic guitar. It was simply titled Bluegrass Guitar. Today it is a classic. In so doing, Crary stole some of Clarence White’s thunder while White was pre-occupied with the Byrds. It was in 1970, in Louisville, that Crary helped form Bluegrass Alliance, which became arguably the first progressive bluegrass band to emerge. Later, they would re-form as New Grass Revival without Crary, but including Sam Bush and Courtney Johnson. Louisville would also see other up-and-coming players like Tony Rice and Bela Fleck.

The town became the Memphis of bluegrass.

Today new generations of bluegrass guitar pickers are rising to carry the mantle that began by in the ’30s of the 20th century. As they play, they are building on the work of Dan Crary who today continues to record and perform. A youthful 73, he has been a regular on the bluegrass and acoustic roots music circuit for decades.

Most recently he has released Perfect Storm. With completely modern technology, a full wall of sound, the album is original, dynamic, and about as bright as any clear Kentucky day. His musical peers on the album include his long time collaborator, singer-songwriter Steve Spurgin, with John Reischman on mandolin, Don Stiernberg also on mando, Keith Little on banjo and mando, and Luke Dewhirst and Martin Stevens adding banjo and fiddle respectively.

Perfect Storm opens with the traditional “Sail Away Ladies/Sally Ann,” then moves through a collection of traditionals, interpretations, and original songs. The traditionals include a ragtime reading of “Deep River Blues,” with beautiful interplay between the guitar and the mandolin. It sounds like a dance between the two instruments complete with some phenomenal solos at often jaw-dropping speed. Also among the traditionals “Shenandoah/Gold Rush/Soldiers Joy” creates, in a quilt-like fashion, a medley of American folk songs that is colorful, diverse, and buoyant. The interpretations include the songs of Gillian Welch(“One More Dollar”), Bob Dylan (“Girl from the North Country”), John Malcolm Penn (“Highway 17”), and Gordon Lightfoot(“I’ll Do It Again”). But it’s Spurgin’s “Muley Was a Railroad Man” that shines the brightest among the vocal tracks on the album. On Crary’s own instrumental “Thunderation,” he gives his acoustic guitar a full work-out with interludes, musical asides, and improvisational solos. It’s a letter-perfect example of progressive bluegrass. At times the lines begin to blur between jazz and rock. It’s easy to lose track of the fact that these are all acoustic instruments.

Crary, today is still among the most innovative instrumentalists on the acoustic guitar. While there is clear genius in his work, his music never draws attention to the musician but stays steadily focused on the song and the music that flows from it. The sound of his picking calls to mind the musicians who have come before him. It’s easy to believe in a heaven for musicians and to believe the legends who have gone on, must be pleased with Perfect Storm. Musically, it is a perfect storm in the coming together of traditional and progressive bluegrass with a congregation of musicians who play with unmatched passion. If you listen real close, you may hear the artistry of Doc Watson and Clarence White in Crary’s flatpicking. If we could see through the cloud of time and space, we’d probably also see their smiles.

The Blind Boys of Alabama: A Christmas Story

And now, for something completely different! ANDA UNION pays a visit from Mongolia