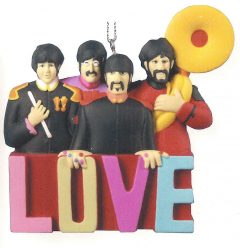 This is a personal theory of mine. But, I’ve concluded that much of the Beatles’ worldwide fame is due to Brian Epstein’s mishandling of his band’s merchandising, licensing, and revenue. It’s well documented that Epstein proved quite provincial in negotiating the Beatles’ cash streams, especially compared to later rock management gurus like Allen Klein and Peter Grant.

But, Epstein’s naivete has never been credited as helping the Fab Four become bigger than they would have. My theory goes like this. Because Epstein never sought out local licensing, trademark, or monetary contracts from those who manufactured Beatles’ memorabilia, small cottage-level entrepreneurs were free to produce and sell products that featured the Beatles’ likenesses. (Epstein basically gave the merchandising away to whomever had the gumption to take it on.)

This allowed hundreds of small businesses to thrive worldwide without concern for contractual entanglements and lawsuits. So, guess what happened? Production of Beatles’ merchandise exploded, spreading the Beatles’ likenesses to virtually every corner of the globe. There is no doubt that the process would have been slower had the usual red tape been imposed.

Later, international contract law, INTERPOL, would impose a brake on this kind of pirating. But, the damage had already been done: the Beatles became worldwide icons overnight as their images were counterfeited without mercy.

But, let’s give Brian Epstein a break. In the 1960s, merchandising (or “merch” to industry cognoscenti) was a very primitive affair. Today, it has become a billion-dollar extravaganza. In fact, it now rivals ticket and album sales in terms of revenue for the many bands that take merch seriously. It also provides small, unsigned bands a way to make quick cash, something that is very important for musicians living hand to mouth.

Recently, I talked with local musician Josh Damigo, who also works at Merchandise-R-Us aka Guitar Center, about the role of merch in his musical business plan.

San Diego Troubadour: What kind of merch do you sell?

Josh Damigo: I sell CDs, t-shirts, and stickers. I also have to sell tickets to shows. Having merch items in your back pocket increases your profit margin and allows your band to not have to rely on shady venues and bookers to give you a fair split.

SDT: How do you use merchandise to promote yourself?

JD: Making sure you have a good band logo and a cool name will help. If your name is Josh Damigo, you have to fight for people to get your name right. This can be part of your merchandizing
strategy. Selling shirts or mugs that say duh-me-go was something I tried. Putting your logo on mugs, pencils, backpacks, lunch boxes, or t-shirts allows the purchaser to identify with your band and to become a human pop-up ad!

SDT: How important is it for bands to sell merch these days?

JD: You have to do it. You have to find any way of turning a profit. If you don’t, you’ll simply scrape by. I had a friend selling “slap bracelets” who made more money off those than from his album sales!!!

SDT: How has the role of merch changed over the years?

JD: The biggest way it has changed is that now you don’t have to limit your sales to just shows. With websites like Reverbnation, PayPal, and Facebook, you can actually run your own shipping department! I’ve sent CDs and t-shirts to new fans in Japan and New England in the last week. They would not have been able to get this stuff from me five years ago.

SDT: Does merch provide you with a significant portion of the money you make as a musician?

JD: I usually double my income with merch. If I sell a t-shirt, my profit margin is usually doubled. For example, I buy 50 t-shirts for 450 bucks. I have the potential to sell those and make $1,000-plus and have my logo in people’s faces! Not bad, right?

The truth is, you’ve got to hustle in this business. If you want to make money as a musician, get to your fans in as many different ways as possible!

It’s easy to see that musicians like Josh Damigo take their merchandising very seriously. This isn’t some extraneous income source that can be given away. Merch is an integral part of a musician’s profit strategy.

At the same time, what constitutes merch is always evolving. And, musicians have to think beyond the usual arsenal of CDs, t-shirts, and stickers. Local musician Chuck Schiele once told me that “over the years we sold beverage coasters, shot glasses, posters, and oddball stuff like broken remnants from live shows, or the bass player’s gig shirt.” Certainly, selling the shirt off your back, or off your bass player’s back, is thinking outside the box. I wonder what Brian Epstein would think of that.