Having gone over the super nerdy essentials of how a variety of compressors work and the differences between the four basic types (FET, VCA, Optical, and Variable-Mu) last month, I thought I would share with you a half-dozen or so favorites from the multitude in my current arsenal. For the sake of brevity, I will do my best to refrain from referencing shovels and footwear.
There are a great many jobs that compel us to reach for one of these tools and at least as many ways to screw things up in the process, if they are used incorrectly or with too heavy a hand. That said, sometimes wrong is right, i.e., the incredible “pumping sound” of Ringo’s drums on a number of great recordings like “Tomorrow Never Knows” came about from actually over compressing them, but setting the release time in rhythmic context to the song, imparting that vibe-y sucking sound that ’60s rock aficionados adore. Here then, are my current VST plugin faves…

The ACME Audio Opticom XLA-3 from Brainworx (https://www.brainworx.audio) was the first plugin I bought that showed me I was getting serious about compression. It’s an optical, tube-powered design, based upon an actual piece of hardware that imparts an amazing harmonic coloration to any signal run through it. In fact, there is an AMP mode that actually lets you run audio through it while bypassing the compression circuit, giving you all of those wonderfully aggressive even-ordered harmonics without affecting the actual dynamics. This is great for bringing acoustic guitars forward in a rock mix or giving some “indie” edge to vocals. Fast/medium/slow response times provide a wide variety of tones when paired with judicious use of input/output settings and you can even unlink the left/right signals and utilize parallel compression for the perfect balance of dry signal and effect. 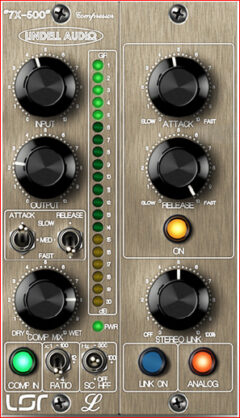 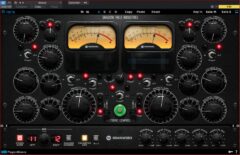 A totally different type of coloration seeps into your audio via IK Multimedia’s (https://www.ikmultimedia.com) T-RackS Vintage Tube Compressor/Limiter model 670. This is a digital version of units employed on the previously mentioned Beatles recordings at Abbey Road. It too adds some tonal coloration, but in a way that adds a warmer girth and weight. It’s a little old-school by definition, so it can take a while to learn to use it to its best advantage. Great on bass, drums, and vocals too, the 670 excels at putting your audio on steroids.
A legendary favorite of engineers and producers the world over has long been the venerable Universal Audio 1176, an FET-type compressor that provides a wide range of attack and release times, from lighting quick to gently slow in addition to an aggressive coloration when driven hard. It’s no overstatement to say that unit is the gold standard that all others are compared to. Lindell Audio, a Swedish boutique audio manufacturer decided to create their own “hot-rodded” hardware version. It kicks ass. The 7X-500 modified the design and Brainworx promptly coded it into VST and added stereo functionality (including a unique left/right relationship knob), parallel compression mix and a choice between variable and fixed timing for attack and release. There’s also a side chain high-pass filter and an Analog button, which introduces noise, hum, and transformer saturation for real world authenticity. I love its gnarly attitude on rock vocals and I’ve never met a snare that didn’t love it.
Getting a lead vocal to be large and in charge in a modern mix is not always an easy process (pardon the pun). The amount of compression it takes to really hang in that perfect sweet spot, where the singer consistently holds the listener’s attention while still allowing everything to breathe under and around it, is often so elusive that it often results in overly processed mush. Gain Reduction Deluxe by Joey Sturgis Tones (https://joeysturgistones.com) is a veritable bazooka in an audio world that most often prizes finesse, but it’s the knockout blow when you really need to bully some stuff around. Appropriately, its’s got unsubtle function names like Slay, Body, and Lo-Fi in addition to Input, Gain, and Mix. Bone simple to use, incredible in-your-face results. An indispensable arrow in my quiver whenever one needs to punch listeners in the face with vocal.
At the opposite end of the spectrum reside SPL’s Iron and the Shadow Hills Mastering Compressor Class A, both available from Plugin Alliance (https://www.plugin-alliance.com) . Any time you see the word “mastering,” think “surgical.” Most mastering-grade processors of any sort are designed more like scalpels than shovels (Ha! Gotcha!), delicately executing a series of almost imperceptible adjustments to make perfectly good mixes just that much better.
Both are emulations of real world hardware and I was lucky enough to use the Shadow Hills unit at Ranch Bernardo’s Studio West on multiple occasions, where I subsequently fell in love with it. Most noteworthy about the Shadow Hills is the fact that it has two compressors in its signal path: The first compressor in the circuit is an optical attenuator. The second compressor is a discrete VCA type. By design, the second compression stage “finishes the job started by the Optical Section,” with each compressor gently “kissing” the signal in an effort to invisibly glue the mix together. But the really remarkable feature for me was the final processing stage, with three selectable output transformers: Nickel (cleanest position with the least distortion, with accentuated ultra-highs), Iron (adds even-ordered harmonic distortion, which makes things “fatter”) and Steel (even more distortion and a tight boost in the lows). This is the Class A version, also known as the Mogami Edition. It’s based upon a special limited batch they made with an updated Class-A discrete compressor section, Lundahl input transformers and hand-wired each compressor with Mogami cables. Compared to the other compressors listed here, this one is the most comparable to flying a helicopter; but once you get the hang of it, it is pure magic.
Iron is a bit easier to operate, but it’s still quite complicated and it has its own killer sound. It’s as equally adept at mastering as it is compressing individual tracks, via a selectable Rectifier section (featuring Germanium, LED, and Silicon diodes), which affect the attack and release times in so many ways you’ll find yourself consulting a chart in the manual quite often. It also features an Air Bass and Tape Roll-Off switch that affects the signal’s EQ in helpful ways and “SideChain EQ” settings that tailor which parts of the signal get more or less love than others. A three-position “Tube Bias” switch controls how strong the actual compression is.
Both Shadow Hills and IRON boast extra functionality with the added features of Brainworks’ patented TMT technology, which adds Channel Modeling, Mid/Side processing, High Pass filtering, Mono Maker, Stereo Width and Parallel Compression, making these two the Cadillac and Lincoln Continental of VST compression plugins. 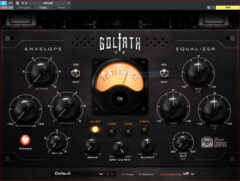 My current favorite on just about everything is Goliath from Tone Empire (https://tone-empire.com/). Goliath has the ingenious distinction of providing many of the features from all the previously described products and more, while remaining extremely simple and intuitive to use via my favored manipulators of choice: Big-Ass Knobs!
Threshold, Attack, Release, and Ratio make up the bypass-able “Envelope” (compression) section on the left side, while fixed frequency Low, Mid and High and Low Cut knobs populate the ”Equalizer” section on the right. In the center there’s a big, sexy VU meter to show how much you’re compressing the signal and below that are push buttons to select Alloy, Tube, Tape, or Vinyl. Alloy is high fidelity wonderfulness, while Tube adds a bit of “air” to the highs. Tape tightens the lows and tapers the top end and Vinyl goes even further by shaving off the highs and lows toward an almost lo-fi result. At the bottom, a Drive knob dials in the amount of harmonic distortion you desire, while ENV-EQ Mix handles parallel processing, followed by an Output knob for overall makeup gain.
Describing its sound, I can tell you Goliath is a perfect descriptor of a name. Things get big and punchy really quick and finding a great sound is faster than any other compressor I’ve tried. Yes, the transformer buttons help and the EQ section add heaps of additional options. All of this means that you spend less time scratching your head and more of it making music, which is why we’re here…winner!
Sven-Erik Seaholm is an award-winning producer, recordist, singer and songwriter. He is still sans chaussures (got you again!). kitschandsync@hotmail.com

Why Do I Have So Many Compressors?