It took me five minutes to determine how to correctly spell “palette.” That’s weird, because it’s a word I use quite often. I mean, the stereotypical image of an artist holding the somewhat oval board aloft in one hand as the other puts the brush to canvas is an overused and simplified trope, but it does get the concept across… mostly.
Beyond the organized blobs of colors laid out for use in the work at hand, there exist myriad shades that lie in between them, as well as completely unique combinations that materialize with the stroke of a knife, mixing a bit of this in with that and a dash of another hue. This is the way that many of us musicians, recordists, and producers hear and craft sound.
Think of the different elements that exist within a song’s arrangement. Maybe there’s an acoustic guitar, a bass, a piano, some drums, vocals, and maybe an electric guitar playing some intermittent flourishes. These are the colors on your palette. Along with supporting and inferring the song’s emotional thread through dynamic and harmonic means, the cooperative sum of these diverse elements is essential to the song’s identity.
Mixing and mastering are pretty fair approximations of this process, but as artists we often delve much deeper into the depths of sonic discovery to blend these elements into a statement all its own. EQ, reverb, delay, distortion, and all manner of frequency filtering can be utilized to wrangle, massage, or gently lift things into previously unheard environments; the discovery of these new surroundings can give a recording a life all its own.
Mitchell Froom and Tchad Blake created some great examples of this with Los Lobos, Crowded House, and Bonnie Raitt. Daniel Lanois and Brian Eno did the same for U2 and Peter Gabriel, and Phil Spector and Jack Nitzsche’s “Wall of Sound” is probably the most famous (if not the earliest) example of using the studio and its tools to raise songs and performances to dizzying new heights.
One of the great wonders of the modern recording era is that unrestrained by budgetary limits (time-wise, anyway) there is really no place we can’t go, taking our listeners along for the ride into the unknown. This is particularly the case within the realm of digital audio recording and the vast proliferation of VST plugins and instruments. The previously mentioned litany of effects processors are literally at our fingertips and, with it, the endless possibilities provided by the use and combinations of these additional colors. 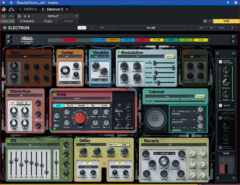 A great product that lays out an impressive toy box in a single screen (think of a guitarist’s onstage pedalboard) is Electrum, developed by Muramasa Audio for United Plugins (https://unitedplugins.com/Electrum).
With up to 11 different “stompbox”-style effects available at once (15 if you use all of the modulation effects!), you can dial up an amazingly diverse amount of guitar tones and textures quickly and easily. There’s also a handy Analyze Input Level feature, which dials in the perfect level to feed into the effects array.
An EQ Matching component automatically analyzes a sample of a guitar sound you like and applies that sound to your guitar setup. There’s also a nifty Polyphonic Tuner for perfectly intonated recording.
Once you’re dialed in, you can start perusing the healthy amount of presets, which are organized by tonal subgroups: Clean, Clean Effect, Mid Gain, Mid Gain Effect, and Hi Gain. This makes getting close to a logical starting point fast and intuitive.
The “pedals” are laid out in a fairly common-sense fashion but can be easily reordered into any chain you’d like, via a drag ‘n’ drop-styled toolbar along the top.
There’s a full-featured Gate and a guitar-centric Compressor leading into a Doubler that uses a few different algorithms (Tape, Spectral, Multi, ER) to achieve a variety of useful and time saving doubling effects.
Modulation provides simultaneous access to several effects, separately or in any combination: “Chorus,” “Flanger,” “Phaser,” “Tremolo,” and “Sweeper,” with several controls (Stereo, Rate, Feedback, Depth, etc.) for very effective application… pardon the pun!
An excellent, yet simple Autowah brings the funk, followed by a surprisingly versatile Distortion pedal. Its Mode function selects between “Boost,” “Scream,” and “Dist” for everything, from blues and grunge to metal. Notable are the Bass, Luster, Corrosion, which bring even more character to the tones you’ll uncover.
The Amp section is where options start to abound, which can slow down the creative process at times. Have no fear though, as there are plenty of great-sounding presets to get you close to what you have in mind. From there, you can select from five different amp types (each progressively dirtier in tone, from sparkling clean to burnished blues, British overdrive, Marshall aggression, and full-on dual rectifier annihilation. Three-band EQ, a big red “Gain” knob and “Power Amp,” “High Cut,” “Balance,” and “Output” knobs help you zero in on your preferred sound. An ingenious “Tight Mode” switch filters lows out of the signal for a more consistently focused tube sound. “Emphasis Frequency” and “Emphasis” personalize your guitar (or whatever) tone, with some help from the “Sag,” “Luster,” and “Corrosion” knobs. If you like to tweak endlessly, you’re going to love the results you can get from this amp.
The Cabinet is just as wide ranging, and you’re really going to have to use your ears to find the perfect match for your amp, as the “Presets,” “Speaker,” “Character,” and “Ambience” settings do very little hand holding, offering sparse, non-intuitive nomenclature throughout. Get a shovel, because you’re gonna have to dig for it, but the tone is in there somewhere.
A graphic EQ gives you seven musically useful frequencies to boost or cut, in addition to a mysterious “X” magic frequency that you can dial in to your personal setup via the “XF” knob. There’s also High Pass and Low Pass filters and a unique “Depth” knob, which allows you to decide how much of the unit’s EQ affects your signal.
The Delay is versatile and easy to use, with “Ping-Pong” and DAW-Tempo “Sync” modes in addition to “Modulation,” “Vintage” (tape saturation), “Tone,” and “Dry/Wet” controls. There are two separate delay lines or “Taps” provided, each with individual delay times, feedback amounts, and panning.
Last, but most certainly not least, is the surprisingly great sounding reverb unit, with 18 different algorithms simulating everything from spring reverbs, rooms, chambers, plates, halls, and ethereal reverbs. It also features automatic ducking, which lowers the level of the reverb while your signal is present, and raising it when it stops, so you get a clear, upfront signal with a beautiful reverb decay that stays out of the way. Value!!
All of the effects are “photo realistic,” but if you prefer an Ableton Live-like 2D interface, it’s yours with the click of a button.
Electrum is definitely weighted toward guitar players, but I prefer to view it as an excellent FX scratch pad, as you can freely move amongst the various effects and try things out without endlessly scrolling through menus and the like. So try it on drums, keys, bass, and vocals, too. In the heat of inspiration, tools like this save valuable time and keep us in the creative flow.
When you’re looking for something different to add some special sauce to your recordings, try running through some of these types of effects. You don’t have to go all-in with it, either. Maybe duplicate a track and do some of these things to it, then bring it up very subtly underneath the original track in the mix. You might find it puts a little hair or a beautiful halo around it, taking your listeners to a more unique and interesting place. Have fun!
Sven-Erik Seaholm is an award-winning producer, songwriter, and recording artist from San Diego, California. Reach out: kitschandsync@hotmail.com

Why Do I Have So Many Compressors? Part 2