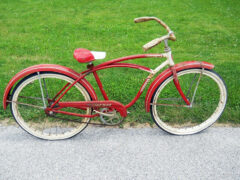 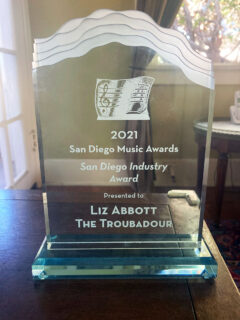 No one does that better or more tirelessly than the editor of this magazine, Liz Abbott.
She didn’t ask for this job. Rather, she inherited it from the friends with whom she had helped establish. When they passed, it was widely assumed that the San Diego Troubadour would leave with them. But she saw what an impact it had on the San Diego music scene and the hundreds of artists who have benefited from the existence of such a supportive hub as the publication had become. She and her husband, Kent, picked up the pieces of their fallen comrades’ efforts and built it into an even stronger, more supportive voice for the under-appreciated, though just as deserving artists you see covered here on a monthly basis, without fail.
As I write this, Liz is being recognized with a San Diego Music Industry Award for her support and efforts on behalf of San Diego’s music artists. I can tell you that no one is as deserving, or probably as embarrassed by this as she is [ed. note: I’m from the Midwest. What can I say? We are very modest and don’t like to draw attention to ourselves, but thank you, Sven! xo]. This is the stuff true heroes are made of and she is the truest hero I know.
God bless you, Liz, just as you have blessed all of us lo, these many years with the sweetest outpouring of love and support that any of us could have dreamed of, much expected to receive.
Sorry my column was late, as usual.
I love you.
—Sven
Sven-Erik Seaholm is recording, producing, and writing his way to you soon. He will perform at Geza Keller’s Nothing to Lose CD Release Party (which he recorded) on Saturday, September 11, at the Aztec Brewery in Vista, California. An outdoor event, for a safe but rockin’ time!