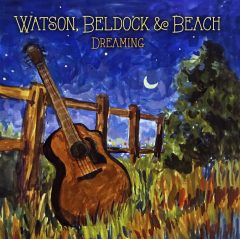 The songwriting team of Peggy Watson and David Beldock, each with successful individual singer/songwriter careers, added journeyman bassist Paul Beach (The Association, Mamas and the Papas, Gary Puckett), to their act and made a record. Watson and Beldock have always capitalized on their strong suits: David’s superbly tasteful multi-instrumental musicianship, Peggy’s rich and crystal-clear voice and solid acoustic guitar accompaniment, their songwriting/storytelling skills, and David’s unerring sense of whimsy à la Randy Newman and John Prine. Beach has always been the consummate sideman. Those things, coupled with their harmonic sense, sparse arrangements, and excellent engineering (the album being very well recorded by Alan Sanderson at Pacific Beat Recording in San Diego) make this a truly delightful listen.

As in any songwriting team, rarely are the songs sprung totally from full collaboration. Mostly they will initially be the product of one writer’s soul, then, once the song seed is planted in the fertile ground of collaboration, it will be watered and nurtured by both to produce the final flower. Such was the modus operandi of Lennon and McCartney and many others. Knowing Beldock and Watson are longtime collaborators and friends, and hearing that most of these tunes were true collaborations, I’ll simply point out the primary writer where I think it’s obvious. There is no BS in these songs. This is simply two well educated and experienced adults speaking candidly through their art, offering observations on life’s many subjects.

The first track, “Middle of Nowhere,” tackles the problem of prejudice through the eyes of three young girls, who, in spite of adults telling them they shouldn’t, show love and respect for each other and play nicely together, “proving their parents wrong.” The song is placed in a sweet simple Latin motif, beautiful melody, and simple lyrics allowed to float over top of a compelling rhythm, interspersed with tasty guitar fills in thirds and sixths. Simple, poignant. Topped off with a quick but brilliant solo by David. Peggy, who does the lead vocal on this one, and, I assume, is the primary writer, delivers the song with enough sincerity to sell it, but not make it maudlin.

Track two, “Before the War,” is (in my mind’s eye) a story reminiscent of CSN’s “Wooden Ships,” sung by, I’m not sure—two lovers? Two strangers forced together by circumstance? Both characters longing for the way it was before the titular war (be it geo-political or inter-personal), make the song sad, beautiful, and stark. The last verse sums it all up so well, “Fires burning from the mountain to the shore, see the color of the sky. How we got here doesn’t matter anymore. Turn and say goodbye.” This track also sounds like it might’ve been a true collaboration with both contributing equally. They duet on choruses and bridge to strong effect, giving the song a bit of a hopeful vibe until the very end where it returns to its rather melancholy and resigned self.

Track three, “So Hard to Let You Go,” sounds like it started as a Beldock song for sure. A confession of sorts from a man who knows he has screwed up but is reconciled to the fact that no life is perfect. His biggest regret of course being the loss of a good woman, so he sings honestly about how hard it is to let her go. The piano foundation and driving acoustic rhythm on both guitar, and what sounds like a high-string guitar, really move this tune. Beldock’s lyrical choices and phrasing are always succinct and vivid, almost curt, with no unnecessary verbiage, and here we find no exception to that rule.

“Across the Sky,” the album’s fourth track, is truly beautiful. A down-tempo love song meant for gazing into one another’s eyes. Mostly a duet with both characters confirming their undying love from afar, this song is also a celebration of the textures of acoustic guitar, piano, and bass, very nicely arranged to great effect.

“Cutie,” song number five, is simply a most delightfully swinging, up tempo, bouncy tribute (It could be a lullaby, though kinda fast to fall asleep to.) to a young daughter. An instant classic in the “Tonight You Belong to Me” vein. Sung by Peggy and David with sweet happy harmony and wicked good guitar parts sounding kinda like a big band horn arrangement, this one guarantees a smile.

“Debbie’s Song” and “Lovebirds,” songs six and seven in this collection, are both about love. The former, written by Beldock for his wife, who is no doubt proud that it was written in her honor. Sung and played by Beldock, it’s one of those “aw-shucks” kind of tunes, with the singer wishing that he could just write a good love song for his lover, when, in essence, that’s exactly what he’s done. The latter, a duet by Peggy and David, is a tight and sweet little love song whose characters are celebrating finding each other: plain and simple with a winning chorus, and light, airy appeal.

The eighth song on the album, is Peggy Watson’s self-help number “I’m Still Here.” After a long, real-life period of health struggles, she wrote a song about the experience. She revealed in an online solo video performance of “I’m Still Here” that it started out as very depressing, pity-party kind of song, but with David’s help, they turned it into something positive, which would likely reach more ears. On the album version she’s reminding herself and everyone that life gets tough sometimes, but one can’t just feel sorry for oneself forever. One always has to remember the good the world has to offer, as long as one’s still here.

The penultimate offering on the album can only be described as a torch song from the classic mold. “Longing for You” virtually steams with the heat of the torch being carried by the singer, Watson. It doesn’t take much imagination to visualize the scene: a smoky bar, the lights dimmed except for the lone spotlight focused on the girl whose heart is doing all the longing. A scotch on the rocks and a cigarette smoldering in an ashtray on the piano nearby. This is great classic songwriting. As the only critique I can muster about this album, this song features two simultaneous solos, one whistled, the other played on guitar. I wish the decision had been made to choose one or the other, since they’re both good and would stand on their own, but together they may detract from each other, IMHO.

And, finally, the title cut is patented Beldock in shape and form, though Peggy surely had a hand in it. “Dreaming,” like so many of David’s tunes, is an easy listen, just striding along telling you the story, compelling you to hear every word, casual and ambiguous, leaving questions unanswered in a way that is both mysterious and satisfying. I mean, we all want to hear the finish of the story, but Beldock leaves it all open ended for you to write your own conclusions. Hope triumphs here. This beautifully arranged and performed recording uses a particular chordal (I believe it’s a Csus2) device, which is especially ethereal and open ended itself and fits perfectly with the dream theme. It’s used to end the tune on a lush cloud-like cushion of sound from which the album fades to its satisfying conclusion.

To sum up, and in full disclosure, I’ve known Beldock and Watson for a long time. Their work earned my respect from the start, and their consistently quality output hasn’t failed me yet. This album is truly a wonderful listen. Comfort food for the ears, heart, and soul. Words and melodies worth your time and bound to make you smile and reflect. The spare use of extra instrumentation is limited to bass (the ever-tasteful Beach) and light drums and percussion (consummate multi-instrumentalist Allan Phillips), both used meticulously and tastefully, serves this album perfectly. The dreamy cover art is by Lupita Carrasco, and the album design is by Peggy’s daughter, Wendy Watson.

Peggy Watson and David Beldock are writers of the finest order, and all three (don’t forget Paul Beach) are veterans of stage and studio with many awards, albums, and credits to their names. So, it’s no surprise that this album is as good as it is. This reviewer recommends that you pick this one up and give it a listen. Dreaming will most likely become a favorite. As a caveat, if you go now to either davidbeldock.com, or peggywatsonsongs.com and purchase the CD before the end of June 2020, $5 of the purchase price will be donated to the Jacobs and Cushman San Diego Food Bank. That’s just how these guys roll.