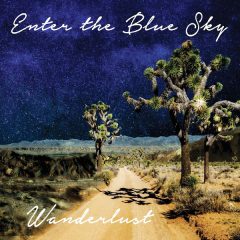 Enter the Blue Sky plays acoustic Americana music that is highly personal, built around Sande Lollis’ songwriting and striking vocals. Since 2016’s CD, Re-Entry, they’ve seen the passing of member John Seever and a change of bassist. In addition to Lollis’ lead and backing vocals and corrugaphone (look it up!), the band includes Karen Childress-Evans on viola and backing vocals, and Paul Tillery on upright bass and backing vocals. Their new CD is Wanderlust.

The new album has 14 tracks, 13 Lollis originals, and includes backing vocals by Tina Dee. The songs, written as far back as 1989, are nearly all first-person ballads with interesting lyrics (included with the artwork, a big plus) that are variously autobiographical, storytelling, and introspective. Lollis has a strong vocal presence, the dominant feature in the sound, and the songs are softly rendered with viola accents giving them an often morose feel, with plenty of emotional heft as she delivers the memorable words.

“Five” is the opener, a childhood memoir by Lollis about her surroundings at age five. A good example of her ability to paint a storyboard, it touches on overhead jets, the neighbor kid that died after being abducted, and her desire for an impossible return to the simplicity of that life as she sings, “Everyone wants to live in paradise, give in just a little and you pay the price.” “Quintessential Rachel” is another good example of creating a musical character, about a carefree friend who is memorable, can’t keep secrets, and careens through life.

Looking inward, “Half Crazy” is one of several tunes that involves Lollis laying her soul bare, a brave, powerfully sung self-analysis delivered with striking harmonies. Next up, in the same vein, “Biggest Lies We Tell” is a waltz-beat confessional about the conflict of telling others about our inner secrets and the elusiveness of the truth, “Sex and the fish we catch are the biggest lies we tell.” The title track is also rendered in 3/4 time, talking about the urge to wander in the desert, while she also touches on the need to find out who will make the journey with you. Childress-Evans, who adds restrained touches throughout, fills the empty spaces in this somber song with some strong viola support.

“Who Knows” starts off with “Love is an earthquake, run and hide, hold on for heaven’s sake.” It is the slowest of the ballads, with Lollis laying on the line the penetrating, minor chord sorrow of a failed relationship. Another introspective tune with superb lyrics is “Crying,” which relays the emotional tugs brought on by seeing a mountain climber, a homeless man, and a poor child and mother without any resources. Buried 10 songs into the set, “Sound Advice” has the most upbeat message and pace on the album, and choruses that starts off with “Woo hoo,” a distinctly different feel than most of the more sedate material.

The generous program includes more worthy songs, as Wanderlust is a personal and earnest document offering a revealing glimpse into the inner world of Enter the Blue Sky and Sande Lollis.