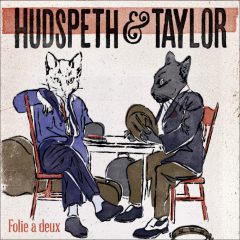 Out of Kansas City come Hudspeth and Taylor, veteran blues performers who have teamed up for their new CD, Folie a Deux. This compilation of 13 mostly self-penned tunes finds inspiration from the blues of the 1920s, ’30s, ’40s, and ’50s, and even later blues influenced pop.
Oklahoma native Brandon Hudspeth does all the guitar work, almost all of which is executed on an acoustic guitar. He is strongly guided by tradition but is not burdened by it. His playing is crisp and lively.

Singer and percussionist Jaisson Taylor has performed all over the world, in North and South America, Europe, Asia, Africa, and as far north as you can get, the North Pole. He has a terrific, well-developed voice and sings these songs with a low-key, back porch delivery that invites the listener in.

I don’t know how long these two have performed together, but the inter-working of Taylor’s percussion with Hudspeth’s guitar playing would suggest that they know each other well. The percussive support during Hudspeth’s solos is solid and, as well, adds some zing to the works.

All the microphone placement, button pushing, knob twisting, and other recording studio magic were executed to a fare-thee-well. All the instruments come through with exceptional clarity. I’ve enjoyed Folie a Deux several times since it landed in my in-box, and I know I’ll return to it again and again. Two thumbs up!