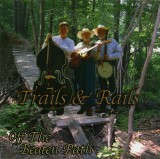 The music of the saddle-weary, hard living trail hands and miners of the last half of the 19th century who carved an impossibly inhospitable West into a rustic home, on foot and hoof, has rightly resulted in a rich musical tradition. As it should, it is intertwined with musical stories of the cast iron arteries, oily smoke, and soot clouds of black monster steam engines; the breed of men and women that put down the rails and the small, hard towns along them.

San Diego’s Trails and Rails have cowboy and train music down pat. By focusing on these songs, on at least seven CDs to date spread over a decade, Walt Richards and Paula Strong have fine-tuned their sound; they play originals, covers of classic cowboy songs, bluegrass favorites, and give a cowboy treatment to some other traditional and country/ western tunes. Off the Beaten Path is their latest and, along with bassist Mike Craig, they stay true to the formula.

The music on the 16 tracks is spare: guitar, banjo, mandolin, and bass arrangements, which emphasize silk smooth harmonies — the kind that happen around campfires in open spaces, often with three voices blending softly. No need to project too loudly, there’s no other noise except the fire. Then, Richards pulls out the banjo for a tune or two of fireworks, and he is an ace.

“Rock Me to Sleep” has the trademark vocal depth, an ambling beat like a horse trot and triple harmonies front to back, all about the weariness of a long day on the trail. Strong and Richards have an amazingly organic vocal blend, it comes through in many other places on the disc, including “Ox Driver.” The two swap the lead vocals on many tracks, like “Frank James Farewell,” joining in sublime harmony for the chorus: “For I believe I have seen my last sunset/ I believe I have jumped my last train”.

The instrumental “Apache” had previous lives as a hit for the British Shadows, then as a surf guitar standard in 1961; here Richards tears through it as a banjo tour de force. Likewise, he shows his oats on “Pony Express” and cooks along with Craig on “Bye Bye Blues.” The traditional “Grandfather Clock” may be the best bluegrass instrumental here.

Trails and Rails can likely cover almost anything written from 1880 to 1980, from blues to Tin Pan Alley and in between. “Tennessee Waltz” and “Brother Can You Spare a Dime” feature Richards in the lead vocal slot; both click. The surprise here, and big sleeper on the disc, is “Blues for Dixie.” It’s a train song, but this is Trails and Rails playing outside of the box: Strong sings it solo, splendidly, and it has a New Orleans-style blues feel along with a nifty bass solo break by Craig.

Off the Beaten Path is a great introduction for listeners new to Trails and Rails, a primer for the genre. It is history and music combined, and a must-have for anyone who is a fan of traditional western music.