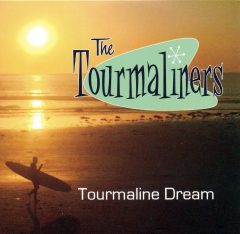 Surf music thundered from the transistor radios of the world in the early 1960s, and folk rock, New Wave, metal, punk, grunge have come and (mostly) gone since then without seeing the disappearance of its drum-heavy, twanging attack. Dick Dale recently passed in April, and his early albums were a template for much of the guitar technique by such bands as the Surfaris. The Tourmaliners are a local band that keeps the surf wave alive with their CD Tourmaline Dream.

A group of experienced players named for Tourmaline surf canyon and featuring an old school approach, the band includes Deven Berryhill, who is the songwriter, guitarist, and producer, and son of Surfaris guitarist Bob Berryhill. Also on board are guitarists Joe Dameron, Matt Clowminzer, Rob Glickman on bass, keyboardist/vocalist Ina Soliz, and drummer Jake Najor. The new disc is a 13-song set with 12 Berryhill original instrumentals, engineered and recorded with hot drums, lots of reverb and whammy bars, and a nod to what has gone before.

“Baja Norte!” kicks off the program with a shot of adrenaline, steamroller bass line beneath two intertwined guitar riffs, and, like in most surf music, the drums are a lead instrument. The upper fretboard touches and vibrato tailpiece action recalls “Apache,” the seminal 1960 surf classic by the Brit band the Shadows (the British Tornadoes also had a monster hit with “Telstar” in 1962, surf music was the first British invasion). “Pumphouse” uses muted, thumping guitar, diving bass drop lines and nice resolution of choruses with chiming guitar lines over crisp chords, while “Green Pipe” takes a reggae-beat approach.

Dale admirers will feel at home on “Espania,” one of the disc highlights, which has a thunderous drum pulse and fast picking that echoes the lightning plectrum of songs like “Misirlou.” “Glasshouse” slows things down—as much as surf music ever does-and uses minor chords and acoustic rhythm guitar to accentuate a lyrical approach, as the drums are more sedate and the guitars carve out a melody much more like a sung lyric. The band tries for an anthemic feel on “Adios Saladita,” with a car engine revving at the outset and big flourishes on the choruses that pound home the riff, and appearances by organ that are rare elsewhere. On “Leilani’s” the island vibe is sustained by having a ukulele handle the rhythm guitar line.

Those who remember Duane Eddy and such heavy surf orchestral pieces as “The Lonely Surfer” will enjoy “Stellular,” another highlight that is probably the catchiest song here. “Point Break” is balls to the walls for Najor on drums, with the clickety-clack lead guitar executing stark, blues-based lead lines to fill the holes in space cut by the drum line the way that much of Joe Satriani’s early music does. Surf music had a big part in music soundtracks in the sixties, thus “Fist Full of Surf,” with its killer tone and spaghetti-western riffs over acoustic guitars. Like the rest of the music here, it clicks, seeming familiar and comfortable while riding a great groove.

DAWN & HAWKES: The Other Side