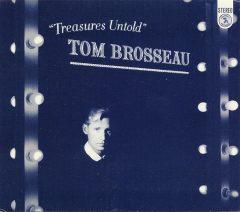 Tom Brousseau finished a trilogy of recordings last year with North Dakota Impressions, playing his stark, original folk songs. He has released over a dozen discs over the last 15 years, and his distinctive upper-register vocals sings songs that include introspective looks as well as travelogues and storytelling. This makes his latest unusual: it is a live album and includes mostly covers, along with a few Brousseau originals. Treasures Untold was recorded at an event in Cologne, Germany, and captures him, a guitar, and a relaxed vibe as songs from Jimmie Rodgers, Libba Cotton, Hank Williams, and others mix with some well-considered Brousseau compositions for an entertaining blend of old and new.

He sets the mood perfectly with “Empire Builder,” an interesting acoustic guitar instrumental, which settles the mood for a couple of minutes with some delicate fingerpicking before morphing into Williams’ “You Win Again,” played softly, stripped-down, and with reverence–and some nice guitar work on the bridge to pay dues to its country-blues origins. Next up, back even further for another song by an immortal, “Don’t Forget This Song” by A.P. Carter. Brousseau is really good at playing old folk songs straight up, with nice, full guitar accompaniment and a bit of old-timey timbre in his voice, turning this tune into a disc highlight. He gives Rev. Gary Davis’ “I Am the Light of the World” the same treatment, and it clicks as well, breezing through the catchy guitar figures and Gospel message smoothly as silk.

If Brousseau didn’t write and sing music, he is skilled enough on guitar to make a living playing it. It shows as he opens his original, “I Love to Play Guitar,” with a minute of tasty playing, setting up the melody of his tune, while brandishing plenty of finger magic in the process. He spells out his approach: ”The neck will reveal when it’s gotten high/ Once a little pressure has been applied/ I climb and I push, I slide and I bend/ If I can get a handle on it I can reach the end.” A superb original from North Dakota Impressions, “The Horses Will Not Ride, The Gospel Won’t Be Spoken” works very well here, because Brousseau sings it a cappella, with touches of guitar here and there for effect–and the traditional feel it evokes, as he maps out the story of a prairie church burning down.

Rodgers is well represented, his old-time 3/4 time style toe tapper “Dreaming With Tears in My Eyes” gives Brousseau a chance to yodel on the chorus and lay down some pleasing guitar lines. The set wraps with Rodgers’ title tune and this time Brousseau sings the song a phrase at a time, old timey style and sounds right at home.

Tom Brousseau pays homage to some folk legends with his live Treasures Untold, a trove of relaxing and entertaining folk music.