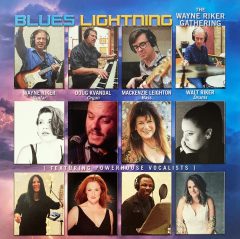 The last time we beheld guitar overlord Wayne Riker was on his 2018 release Blues Breakout, a spectacular exhibition of fretboard heroics. Known for years for his work on a wide array of projects in a great many styles both locally and nationally, the previous album was Riker in a mood to blaze the blues, and it was, to my ears, the most impressive display of blues guitar know-how since Johnny Winter’s fabled Second Winter. Riker is a very distinct, even singular stylist, of course, but what he shares with Winter is an unerring sense of melding technique, taste, flash and feeling into each phrase he puts out there. Wonderfully fluid, he makes it seem that he can make his guitar convey the emotion and attitude he feels the moment he feels it; this disc is the kind of long-form improvisation which renews itself with each chorus. With each solo our friend Wayne essays forth is packed with what might be called the Wow Factor.”

The new record, Blues Lightning, continues this ride, with Riker this time availing himself of more able musicians—a quartet with Riker on guitar, Doug Kvandal on organ, Mackenzie Leighton on bass, and Walt Riker on drums. A briefer album, Blues Lightning, has six hard-sizzling tracks, recorded live on three different dates at San Diego’s Studio West. The mood up-tempo, with enough of a B.B. King’s feel for elegant hullabaloo. The band throughout demonstrates a flawless sense of what how to play the changes, with bass and drums locked into a neat habit of propulsion, keeping the music tight while allowing it rock hard.

Riker’s guitar work is a revelation to anyone who had loved his accelerated dexterity from the 2018 release. This time his breaks are sweet, the phrases more voice-like, with very good use of seeming obligato statements, superb use of pauses between riffs, and an emotionally pulverizing feeling for the high blues bend, controlling with a vibrato at the end of the line, compelling your author to slam his hand on the coffee table a few times. The band mix is spicier with Kvandal’s adroit work on the Hammond B-3 organ, producing swells of funky, grinding texture that weds Riker’s spikey guitaring and the rock-solid rhythm section. He fills gaps, offers short phrases to underscore vocal lines, and is a glorious second voice on his own solos—spare, resonant, and eternally funky. Guitarist and organist engage in a continuous series of quick- witted dialogues and call-and-response.

As mentioned before, this release has only six tracks, each of them a glistening gem of finesse and feel. But what brings Blues Lightning even more intoxicating are the six powerhouse vocalists: Leonard Patton, Shelle Blue, Deanna Haala, Michele Lundeen, Scott Mathiasen, and Lauren Leigh Martin. Each vocalist applies their potent skills to their respective songs. Every whoop, holler, and belted testament to the ironic ways of life and love is a subtle array of emphasis and insight. It’s one of the record’s added pleasures that listeners get to appreciate the contrasting yet complementary contrasts that makes the music even more electrifying.

We range from the subdued and conversational truth-telling of Leonard Patton’s reading of the B.B. King classic “Everyday I Have the Blues” (composed by Memphis Slim), a vocal marked both by restraint and conviction in the singing while the band provides a sprite, marauding groove to the classic blues shouting, brought on by Scott Mathiasen on Freddy King’s “Tore Down” ( written by Sonny Thompson), a snappy and strutting shuffle highlighting the singer’s grand and soulful rasp over the percolating ensemble. Shelle Blue’s reading of “W-O-M-A-N,” composed by Dorothy Hawkins, Abbey Mallory, Jean Mitchell, and Jamesetta Rogers, is a sexy and assertive response to the male point of view of “I’m a Man,” reminding everyone in the room that women are full partners in the life they have with their mates. The B.B. King arrangement of “Rock Me Baby” is sufficiently growled, groaned, and soulful as rendered by Deanna Haala’s declarative voice.

Michele Lundeen’s vocal on the blues-torch song ballad “That’s Why I’m Crying” (composed by Samuel Maghett) brings a hint of the sassy earnestness of Eartha Kitt to the testifying. Riker’s guitar fills and his solo on this tune, incidentally, are quite thrilling, responding to the highs and lows of Lundeen’s matchless singing. Singer and guitarist create unbearable tension until Riker cuts loose with a bravura solo, eloquent and slashing. The solo is an exquisite showcase of two-fisted blues work, as is, in point of fact, the entirety of Blues Lightning. Buy the record and do as I do and place the disc on while having your morning coffee. Twenty minutes of that in the A.M. and I am ready to seize the day.

TROUBLE IN THE WIND: Weird Living

STEFAN HILLESHEIM: On My Own