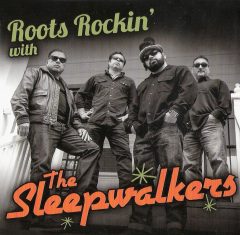 Since before the turn of the century, the Sleepwalkers have been a part of the San Diego roots scene, frequently appearing among the nominees for best roots band at the San Diego Music Awards. With various personnel lineups, the band has shown a remarkable ability to span styles—rockabilly, country, Tex-Mex, blues-rock, and most flavors between. Think of a blender with Los Lobos, Cowpunk à la the Blasters, and a dash of Texas roadhouse blues.

Their Roots Rockin’ with the Sleepwalkers CD has been out for a while, but is a perfect example of the kind of sound that earned their rep. On board are Johnny Valenzuela (vocals), Big Al Fuentes (rhythm and lead guitar), Action Andy Rasmussen (bass), and Bob Osuna (drums), with guest help on guitar and keys from Jeremiah Silva and David Fleminger. The 11 tracks mix covers and originals pumping out a sound like it burst from the speakers of a car radio picking up a 50,000 watt border “X” AM station, cranked to 11. Its rawness is its strength.

“Annalee” is a perfect start—the stars of this show are Venezuela and his foil Fuentes, and here they rock hard, pouring it on as the lyrics lament the familiar tale of a young femme fatale who led a good man to jail, with nice piano support from Fleminger. The subject matter doesn’t change much for “Angel of Love,” a nifty blues/surf guitar hook snags the listener into another tale about a mysterious and dangerous woman.

Tejaño makes its first appearance with “Digame,” and the guitar filigree, drum/percussion touches and backing vocals, and ambience are perfect for a transformation that captures a short trip south. The vibe remains though the muscular guitar/drum instrumental “El Monstro.” “Make It Up to You” is the closest thing the band ever comes to a straight pop-rock statement, but even it has a cowpunk feel as Valenzuela sings, “Cheating dog and drunken fool/ I’m gonna make it up to you.”

“Cool Ghoul” takes a rockabilly approach to Halloween, and “Tijuana Mama” has a Latin pulse as Valenzuela sings of unrequited love of a dark-haired woman who lives in TJ-and doesn’t even know his name. The Spanish meaning of “Rey De Los Reyes’ is “king of kings,” and the guitar work again is ear-catching as Fuentes uses a high-speed pick work to add an exotic feel. The disc closes with “You Gotta Lose,” as the band returns to rockabilly street with genuine gusto, and it gives Fuente another opportunity to exhibit some fretboard flash.

Roots Rockin’ with the Sleepwalkers is the kind of home-brewed, no nonsense Americana music that makes the local music scene so much more endearing than that of many more popular and commercial acts. It is music on its own terms, minus the glitz, instead just representing the musical heart and soul of the cats who laid it down. Something that we need more of.