January 2023
Vol. 22, No. 4
The Ruby Room Closing Its Doors June 2013
Lady Brain Presents “Home is Where the Art is” Holiday Party and Clothing Drive by Lindsay WhiteJune 2013
How Did You Get Here? by Chuck LapinskyJune 2013
Aging Rockers and Fixed Incomes by Paul RosengardJune 2013
Doors of Change: An Environment of Trust June 2013
Notes from Desert Trip by Matthew BurkeJune 2013
Hail the Conquering Groovies! by Steve ThornJune 2013
The Spring Harp Festival Blows into La Mesa on Saturday, March 26 by T.E. MattoxJune 2013
MARTIN GRUSIN: A Loving Tribute from his Daughter by Aryn GrusinJune 2013
Ballads and Blues with Jeffrey Joe and Eric Freeman June 2013
Advertisements 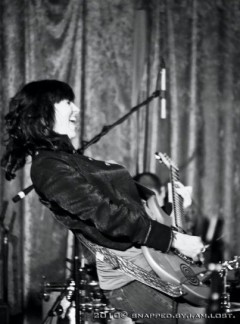 After 5 years, 1500+ shows, 19 parking lot festivals, 3 CityFests, countless art shows, numerous charity events, and several friends and drinks later, The Ruby Room will be closing its doors and changing ownership the week of June 11, 2013. Due to creative and directional differences, operators and half-owners Sean and Brittni Cute are selling their shares of the Hillcrest music venue to their business partner, and taking the name with them. “This isn’t goodbye,” Sean Cute states, “This is reincarnation. The body is still there, but the soul of The Ruby Room is moving on to take new form”.

The Cutes have already starting shopping for new locations for their next project in the San Diego area. “Live music and art is who we are, and you will be sure to find a bigger and better version of this with our new project. The talent in San Diego is vast and we feel so fortunate to be a part of it,” says Brittni.

The Cutes would like to personally thank the community of San Diego, the fabulous neighborhood of Hillcrest, the Hillcrest Business Association, all the artists, musicians, non-profits, promoters, patrons, journalists, friends, neighbors, and staff that have passed through the doors of The Ruby Room. “It takes involvement from everyone to make a creative project of this magnitude happen. This has been an extremely exciting chapter in our life,” adds Sean.

Sean Cute will also be stepping down as Secretary of the Hillcrest Business Association, although he plans to re-join following the opening of the new location. Sean says of Hillcrest: “Giving back to the community that I was a part of even before we opened The Ruby Room is a high priority. Our neighborhood is definitely something special.”

Although owners Sean and Brittni Cute have left, The Ruby Room name will change by mid-July. The new concept will be led by their former business partner, with less of an art and music orientation, and more focus on being a local tavern.

Artists themselves, the Cutes do have a few side projects cooking in the summer months. Sean is currently working on a self-penned book about the experience and exploits of owning a rock venue titled “What The Hell Do I Know”. Brittni will be giving her abstract photography career a resurgence, which has spanned New York, LA, London, and Milan.

Three on Three: 3 Reasons to Go on Tour / 3 Tips on Planning a Tour