February 2023
Vol. 22, No. 5
The Pamela Des Barres I’m with the Band Rock Tour by Raul SandelinApril 2017
Examining Bob Dylan’s Love Sick Blues by Ted BurkeApril 2017
John Densmore: An Invitation to Dance on Fire by Terry RolandApril 2017
A Father’s Day Story: The Courtship of Harry Nilsson’s Son, Zak by Terry Paul RolandApril 2017
Jazz 88 Keeps Pumping Out the Tunes: Station persists despite numerous challenges over the years, including Coronavirus by Michael J. Williams and Jim TrageserApril 2017
Me and Ronnie Earl by Eric LiebermanApril 2017
Lawrence Ferlinghetti: America’s Poet by Ted BurkeApril 2017
Q & A with Gabe Lapano: After the Rain and Beyond by Andy RasmussenApril 2017
Remembering Sam Hinton by Paul HomiczApril 2017
Band of Brothers: The Liggins Brothers by Bart MendozaApril 2017
Advertisements 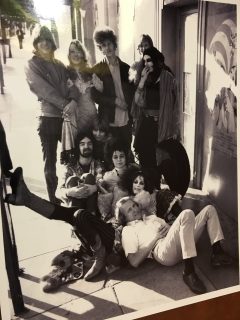 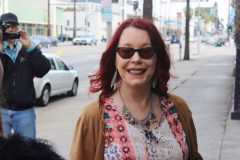 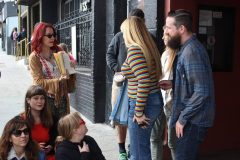 Des Barres and the January tour group outside the Whiskey

The 6400 block of Hollywood’s Sunset Boulevard is a busy place on Sunday mornings. On one side of the street is Amoeba Records, one of the largest, hippest record stores on the planet. Across the street is a perennial hamburger stand (now a Jack in the Box) where Ricky Nelson once crooned ’50s teenyboppers in the parking lot. Kitty corner is the old RCA building where Elvis and the Rolling Stones recorded while in LA. Hollywood and Vine, the Hollywood Palladium are only a couple blocks away. A sign of the times: the fluorescent yellow cross of a marijuana dispensary beckons down the street, the facade of the building covered with astro turf.

As pedestrians bustle by, a group of kindred spirits is gathering at the corner of Sunset and Ivar. Singles, couples, and a film crew. Their watches synchronized; they walk toward each other like magnets with a secret handshake. They’re all there for the Pamela Des Barres I’m With The Band Rock Tour.

And in an instant, the van pulls up with rock music’s most famous groupie and her trusted rock ‘n’ roll sidekick and driver Kip Brown. The bus tour is about to begin.

Pamela Des Barres was pivotal in defining LA’s music scene in the 1960s and ’70s, which in turn defined the world. Raised over the hill (the Hollywood Hills) in Reseda, Pam Miller discovered the clubs along the Sunset Strip while still in high school. She befriended early locals like Frank Zappa, Captain Beefheart, Love, the Doors, and the Flying Burrito Brothers. She founded the GTOs (Girls Together Outrageously) whose album Permanent Damage featured a who’s-who of the trans-Atlantic music scene, from Jeff Beck to Frank Zappa to Rod Stewart, Lowell George, and Davy Jones.

Pamela then befriended many of the British groups and artists that came to LA: Led Zeppelin, the Stones, Keith Moon of the Who, and eventually her husband, actor and musician Michael Des Barres.

Along the way, she kept journals of everything, which she has turned into five published books starting with I’m With The Band (1986). She has also acted and still does a healthy schedule of TV and public speaking engagements.

The Bus Tour pulls away from the curb. And after several right turns, we’re heading east on Sunset. Pamela explains how she first met the Stones in the RCA building parking garage. We zigzag between Sunset and several side streets: the Hollywood Palladium, Capitol Records, the Knickerbocker Hotel, A&M Records, the Montecito where Pamela lived for a while with actor Don Johnson. The Landmark where Janis Joplin OD’d. Stories about Tiny Tim. Finally, we stop and get out at the corner of Sunset and Crescent Heights, the site of the 1966 Sunset Strip Riot. Miss P begins to read from I’m with the Band for the tour group. About 15 people huddle around where Pandora’s Box once stood, where 1,000 young people sat in the street in 1966–Pamela, Sonny and Cher, Peter Fonda, and Jack Nicholson. Buffalo Springfield even wrote a song about it!

…stop! Hey!
What’s that sound?
Everybody knows
what’s going down

After I’m with the Band, Pamela wrote several more books. Take Another Little Piece of My Heart (1992) serves as the successor to I’m with the Band. Here, Pam Miller, the young groupie, becomes Pamela Des Barres, the young woman, who deals with the mature side of rock ‘n’ roll: Losing friends to addiction, finding and losing love, getting married, becoming a mom, getting divorced. In Rock Bottom (1996), she explores rock ‘n’ roll’s dark side writing about the many Rock Stars who met an early demise: Jan Berry, Kurt Cobain, Eddie Cochran, Brian Jones, Jimi Hendrix, Dennis Wilson, and others. She interviews family members and visits many “gravesites, deathsites, and crime scenes.” In Let’s Spend the Night Together (2007), Pamela gathers a gaggle of younger and older groupies together to discuss 40 years of groupiedom, from the Plaster Casters to the groupies of Grunge. Let’s Spend the Night Together was also made into a VH1 special.

“My latest book, Let it Bleed–How to Write a Rockin’ Memoir, is based on 17 years of teaching women’s memoir workshops all over the country (and Canada and the UK!) and features a lot of my student writing. Very proud and honored to be able to share their work. It’s a cathartic experience and kindred spirits come together and since they’ve read my memoir, the truth pours (bleeds) out all over the page.” Besides her writing, Pamela Des Barres has appeared on TV and in film, including Frank Zappa and Tony Palmer’s 200 Motels. She continues a brisk public speaking schedule.

The tour crisscrosses Hollywood again: the Whisky A Go Go, the Troubadour, Pamela’s apartment where her “beau” Jimmy Page gave her an acetate of Led Zeppelin II, the songs still not in their final order. Waylon Jennings also dropped by that apartment a time of two. We stop at Charlie Chaplin Studios, across the street from the taco shop that inspired the Burrito Brothers to take their South-of-the-Border name. We head out West, to Beverly Hills–the Beverly Hills police substation and the Century Plaza Hotel where Keith Moon dumped a large box of Tide laundry soap into the towering fountain. Everybody gets out at the Whisky for a group shot, recreating a 1968 photo of Pamela, Gram Parsons, Chris Hillman, the GTOs, and the Flying Burrito Brothers.

How long has Miss P been doing these tours? “I got an email eight years ago from a rich Brit who wanted to one-up his best friend and hired me as his birthday gift, asking me to take him around to the sites in I’m With the Band. They picked me up in a Rolls limo and peeled off 50 100 dollar bills at the end of the day after dinner at the Polo Lounge! I thought what a great idea! And the history in my head has filled a few books so I thought people would be interested in a first-hand account of the musical revolution in LA.”

Kip navigates the streets after an especially hard SoCal rain. He turns up Laurel Canyon, where several hillsides have fallen. So we wind up a detour to the Canyon Country Store, where Mama Cass lived and just about everyone else in the LA music scene hung out at one time or another. We pass the Frank Zappa cabin, Houdini House. We stop and gather while Pamela reads: it’s the story of how she met Jim Morrison when they were neighbors living behind the Canyon Country Store. For more details, read her books. But let’s just say, Jim’s girlfriend (also named Pamela) was not too pleased.

From the Canyon Country Store, we climb Laurel Canyon to Mulholland Drive. Beyond that is Gram Parson and Chris Hillman’s hilltop Burrito Manor. We snake through canyons where the GTOs used to hitchhike. In 1968, these canyons were filled with animals and freaks, streams and oak trees. Topanga and Benedict Canyons farther west. The canyons of the Hollywood Hills take on a life of their own.

The GTOs were possibly rock ‘n’ roll’s first all-girl group that wrote and recorded their own music. They were part Ronettes, part avant-garde theatrical troupe. Miss P, Miss Mercy, Miss Lucy, Miss Cynderella, Miss Christine, Miss Sandra, Miss Sparky. Pamela first started dancing with Vito Paulekas’s dance troupe, a group of early Freaks that danced at the local clubs. This evolved into the GTOs under the tutelage of Frank and Gail Zappa. Their album Permanent Damage (1969) features a supergroup of musicians and was produced by Zappa and Lowell George. Pamela’s “I’m in Love with the Ooo-Ooo Man,” her homage of Nick St Nicholas of Steppenwolf continues to be a cult classic. The GTOs also helped many of the bands select their attire. When they dressed the Alice Cooper band in ladies’ make up, the gender-bending look took hold and Glam Rock was born.

Near dusk, the Pamela Des Barres I’m With The Band Rock Tour pulls back into the station, along a side street at Amoeba Records. We are standing along the Sunset Strip at sunset! The group of kindred spirits that gathered earlier in the day is now a well-seasoned crew of travelling companions. They all bid adieu to Pamela, many with prolonged hugs. They have all travelled back to “Hollywood, 1968” and returned.

Pamela Des Barres is called the “queen of the groupies.” And she certainly works to forward that brand. She even has a clothing and accessories line called Groupie. However, Pamela Des Barres is a writer for any time. Jane Austin, AnaÃ¯s Nin, Toni Morrison. Like the great writers, Pamela’s memoirs transcend her time and the specifics of the late 1960s Sunset Strip. She has kept her writings all of these years, not to mention her photographs. Starting with her early journals, she is deeply introspective. The events around her help mark time. But the internal struggles–puberty, adolescence, adulthood–are what ground her writing. Her questions and fears are universal. Pamela focuses on her body as it grows and changes, her emotions as they grow and change. She came of age during a very tumultuous time. And that tumult acts as a metaphor for the changes that she undergoes in the process. While young kids were rioting in the streets, Pamela was recording both these outward struggles as well as her very inward struggles.

Yet she remains very closely connected to her specific time in history: Los Angeles, 1960s and ’70s. Along with many of her friends–Captain Beefheart, Chris Hillman, Iron Butterfly, Vito Paulekas, Frank and Gail Zappa, among them–Pamela Des Barres has helped to define a very specific art movement. While LA helped define pop music for the world, those who grew up in Southern California were looking for something a little different. The mixed genres of Beefheart, the virtuosity and humor of Zappa. Kids growing up in 1960s SoCal encountered a music that was too quirky to be pop. It was an eclectic mix of everything that had passed through a Hollywood sound stage: classical and jazz, rock and pop, musical theater, dialogue, sound effects. The real California sound blended all forms of entertainment together to create pop music’s avant-garde. And 50 years later, Pamela Des Barres is still on the cutting edge.

Pamela’s next I’m With The Band Rock Tour is Sunday April 9th. Please visit her website for more information about upcoming writing workshops, future bus tours, and other events.

TECHNICOLOR DREAMS IN BLACK AND WHITE REALISM: San Francisco in the Sixties

The Anthology of American Folk Music: Hanging Out in the Ozone with HARRY SMITH