October 2022
Vol. 21, No. 13
The Lovebirds to be honored at this year's Folk Alliance in Kansas City February, 2015
Lady Brain Presents “Home is Where the Art is” Holiday Party and Clothing Drive by Lindsay WhiteFebruary, 2015
How Did You Get Here? by Chuck LapinskyFebruary, 2015
Aging Rockers and Fixed Incomes by Paul RosengardFebruary, 2015
Doors of Change: An Environment of Trust February, 2015
Notes from Desert Trip by Matthew BurkeFebruary, 2015
Hail the Conquering Groovies! by Steve ThornFebruary, 2015
The Spring Harp Festival Blows into La Mesa on Saturday, March 26 by T.E. MattoxFebruary, 2015
MARTIN GRUSIN: A Loving Tribute from his Daughter by Aryn GrusinFebruary, 2015
Ballads and Blues with Jeffrey Joe and Eric Freeman February, 2015
Advertisements 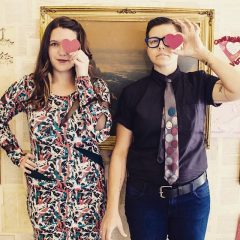 Lindsay White and Veronica May are the Lovebirds

For those of you who aren’t familiar the Folk Alliance International Conference is the world’s largest gathering of the folk music industry and community (crossing a diverse array of folk genres — everything from bluegrass, Celtic and Appalachian traditional music to singer-songwriter, Americana, and contemporary roots bands).

On Thursday, February 19th, award-winning San Diego indie folk/pop duo the Lovebirds will be performing as an Official Showcase Selection at the 2015 Folk Alliance International conference in Kansas City, Missouri. Out of over 700 submissions, 200 artists are selected as Official Showcase acts for the annual conference, which spans February 18-22, the Lovebirds are the only act representing San Diego. Their public performance will take place at 9pm in the Westin Crown Center’s Pershing East room. Information and tickets can be found at www.folkalliance.org

Fresh off their Kerrville New Folk Winners Tour in Austin, Texas, the Lovebirds have received much acclaim for their latest album Breakup Shmakeup. The duo, once romantically involved, decided to call it quits on their relationship to preserve their musical partnership. Their story was featured on several major outlets, including The Advocate magazine’s “Hot Sheet” and Curve Magazine. Singles from the record were exclusively premiered on Guitar World, Relix, and Zimbio, while the record itself earned the Lovebirds’ third San Diego Music Award nomination for Best Local Album. Breakup Shmakeup only scratches the surface of the Lovebirds’ journey. The duo also advocates for mental illness awareness, as member Veronica May is diagnosed with Bipolar I Disorder. This subject is represented extensively in their catalog of music, and their story relating to mental illness has been featured in the Huffington Post and the Songstream Project.

This year, the Lovebirds have already hit the ground running. In addition to the Folk Alliance showcase, the duo opened for national act the Lone Bellow in San Diego on January 5th, and will tour the U.S. this
summer, with a final date scheduled on the main stage at Kerrville Folk Festival in Kerrville, Texas. Upon their return, they will head back to Berkley Sound to work on their fourth yet-to-be-named album.