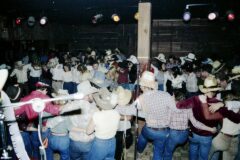 Old poster with the music line up at the Mustang Club.

Touch of Country band was a big hit at the Mustang Club. 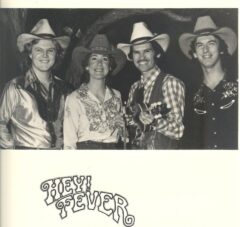 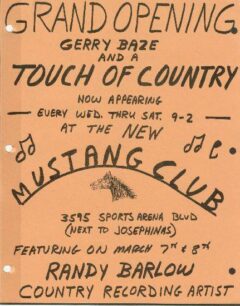 On your next trip to the Home Depot on Sports Arena Boulevard, take a glance over to the northwest corner of the parking lot where once stood the Mustang Club at 3595 Sports Arena Boulevard, a legendary country music hotspot that featured many top local artists and performances by a slew of national treasures, including Alabama, Hank Williams Jr., Lacy J. Dalton, Randy Barlow, and Becky Hobbs to name a few. What is now a square block area of thrift stores and swap meets and a haven for many of the homeless tucked away in sleeping bags and ambling around in rickety shopping carts, was once the Bermuda Triangle of entertainment. Directly across the street was the San Diego Sports Arena where you could take in an NBA or San Diego State basketball game, then stroll back across the street to the Tower Records store, open until midnight. Adjacent to Tower Records was Foggy Notions bar, a popular hang for beer and air guitar contests.
The year was 1980 when the movie Urban Cowboy was a box office smash hit. Club owners took full advantage of the movie’s mass appeal, which led to suburbanites and yuppies packing clubs to line dance, two step, and ride mechanical bulls. Hence, on March 7, 1980, the Mustang Club had its grand opening, featuring a five-piece house band, A Touch of Country, in addition to a special set by 1979 Country Music Association Award (CMA) nominee for Best New Male Vocalist, Randy Barlow.
Word traveled fast about the new hot spot that included added attractions, such as Ladies Night on Wednesdays, KSON radio station give-away night on  Thursdays, with disc jockeys giving away door prizes, and Bluegrass Jamboree nights every Sunday. One memorable night featured the group, Hey Fever, with Farley, the fiddler, aka Gary Francisco, clogging on patrons’ tables while fiddling up a storm.
Crowds were lined up around the corner nearly every night to get in, recalls A Touch of Country lead guitarist, Bill McDuffee. “Pulling into the club parking lot an hour before start time, especially on a weeknight, and seeing a line from the front door all the way down Kemper Street was something that will always stay with me.” The  bassist Jeff Smith added, “We even had people ride their horses in for a drink.” Local sports celebrities were often seen strutting their stuff on the dance floor on any given night, as Smith noted: “the San Diego Chargers defensive line were our bodyguards after several game wins. Louie Kelcher would pick up our keyboard player, Rob, with one hand while requesting the song “The Devil Went Down to Georgia.” Former San Diego Clipper star, Bill Walton, made cameo appearances after home games across the street, duly noted by Smith: “He towered above every one else on the dance floor as he danced with his wife.”
Smith recalls fondly the opportunity to share the stage with some of country music’s top artists, which were listed above. “There were an amazing number of artists that we had backed up or shared sets with,” he reminisced, “including after-hours jams with some of them too, like Lacy J Dalton, Becky Hobbs, Leon Everette, Hank Williams Jr., Bobby Bare, Ed Bruce, and Steve Wariner.” However, the most fortuitous moment came serendipitously as Smith proudly recalls: “In February of 1981, a group that we had heard little of, arrived at the Mustang Club in a pickup truck and a rental moving van. Their tour vehicle had broken down and they came to San Diego on a limp and a prayer. That group was Alabama, soon to be one of the biggest names in country music history. We played alternate sets with them that evening and later sat around like good old boys after the show, drinking and telling stories.”
Guitarist/vocalist and founder of A Touch of Country, Gerry Baze, recalls the time Bobby Bare invited him into their tour bus. It was something to marvel at as Baze reminisced. “They had a music system in the back and front along with full sleeping quarters.” Baze, blind since birth, recalled, “Bare mentioned that someday I’d have a bus just like his, when I replied ‘so long as they let me drive it.’”
Baze mentioned another instance when RCA hit recording artist, Razzy Bailey, appeared at the club. “During our set,” Baze remembers, “a guy in the audience kept coming up to the stage insisting on singing a song with the band. I repeatedly said no sir you can’t. Eventually my bass player nudged me and said it’s Razzy Bailey that wants to sit in. At that instance I said ‘absolutely, come on up.’” Another moment of Baze’s self deprecating humor about his disability.
On November 12, 1983, A Touch of Country played its final gig at the Mustang Club after three years as the club’s main house band, leaving amicably and moving on to other burgeoning country music bars in the Southern California area. By 1985, the Mustang Club’s five year run was over, with many of the urban cowboy Jet Set turning in their cowboy boots and hats. The following year, in 1986, the same edifice became Mony Mony’s, a popular hang for disco with flashing blue and red lights adorning the dance floor, followed a few years later by the Rage,  a short lived Punk music venue, and finally in 1993, Club Ministry, a mainstay for alternative music bands  until 1999.
Although the structure is now long gone, the memories will forever be etched in the memory of those who attended the many nights of top entertainment and shows at one of San Diego’s most unique clubs of all time: The Mustang Club.