January 2023
Vol. 22, No. 4
The Jeffrey Joe Show Scheduled for Sunday Night April 2014
Lady Brain Presents “Home is Where the Art is” Holiday Party and Clothing Drive by Lindsay WhiteApril 2014
How Did You Get Here? by Chuck LapinskyApril 2014
Aging Rockers and Fixed Incomes by Paul RosengardApril 2014
Doors of Change: An Environment of Trust April 2014
Notes from Desert Trip by Matthew BurkeApril 2014
Hail the Conquering Groovies! by Steve ThornApril 2014
The Spring Harp Festival Blows into La Mesa on Saturday, March 26 by T.E. MattoxApril 2014
MARTIN GRUSIN: A Loving Tribute from his Daughter by Aryn GrusinApril 2014
Ballads and Blues with Jeffrey Joe and Eric Freeman April 2014
Advertisements

Jeffrey JoeÂ will be recording his sophomore release atÂ Berkley SoundÂ this year. In an effort to get the balladeer and his studio musicians vibing before they head in to record, producer Jeff Berkley suggested they play a live event and invite some friends, maybe charge a little to help with recording costs. A kickstarter to his kickstarter… if you will. 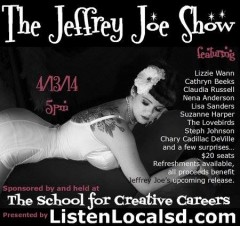 The friends who accepted the invite to perform? Only San Diego’s hottest female singer/songwriters, poets and dancers. Steph Johnson, The Lovebirds, Lisa Sanders, Nena Anderson, Suzanne Harper, Lizzie Wann, Claudia Russell and more. Everyone involved, including the amazing venue in which the show will take place, is donating their time to help fund this project for Jeffrey Joe. Why? His music moves us and he’s an amazing man. Because we love him.

ListenLocalsd.com was honored to be asked to help produce this event which is being filmed by Stephen Stopper andÂ The School for Creative Careers,Â our gracious hosts of this amazing space. Jeff Berkley of Berkley Sound will be recording audio and Jon Edwards from Live Sound Support will be mixing the show.

Doors open at 4pm, refreshments will be available. The show begins at 5pm at The School for Creative Careers 9590 Chesapeake Drive. The show will run 3 hours with a 20 minute intermission.The event is seated and tickets are $20. This event will sell out so don’t delay in reserving your seat now.