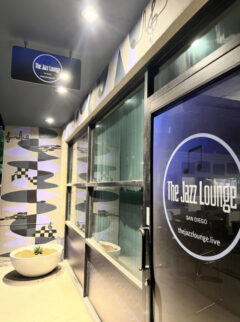 Entrance to the Jazz Lounge. Photo by Laura Preble.

The Jazz Looking for the Jazz Lounge is a bit like looking for the lantern at the back of the wardrobe in Narnia—you’re not sure if it’s really there or you dreamed it. Like the lantern, the club is a golden glow in the dark. It’s tucked between small restaurants and salons in an urban college neighborhood better known for auto repair shops and liquor stores.But if you are a jazz lover or a seeker of such earthly delights as virtuoso piano notes or filigreed percussion work spiced with the low-bass bowing of a wooden upright bass, you may hear it before you see it. And you’ve come to just the right place, traveler. You’ve stumbled upon a secret world of rare beauty and other-worldly tunes. This is Leonard Patton’s Jazz Lounge.

If you’re not determined and confident, you may think it’s closed. The large picture window is cloaked in black velvet curtains; it’s tough to peer through the door, so you have to muster some courage and just open it. Once inside, you’ll be amazed, so find the courage. Go in.

What’s inside is the dream of San Diego jazz legend and world-renowned vocalist Leonard Patton, but it’s not just his dream. His wife, Jerusha, and his three kids are part of this endeavor too, so it’s definitely a family affair. On the night I attended with two friends in tow, Leonard showed us to our seats, made sure we had water, and ran the sound board as well as took a few turns as vocalist with a band created to pay tribute to keyboard legend Chick Corea. 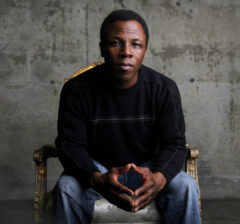 Leonard Patton, owner and curator of the Jazz Lounge.

“I want to try and make it long lasting,” Leonard said in a phone interview. “Something that people can really call home, musicians and people who support music and a listening place. There are not enough of those. I’m hoping that people get inspired and do what I’m doing. It’s not about me and my space. It’s about making the communities in San Diego thrive with music and art.”

For those who were here in the ’80s, San Diego used to be a jazz town, although a lot of it at the time was fusion or smooth jazz. Players still find places to play, but they’re not always consistent, and they are usually tucked into hotels, restaurants, or venues with other purposes. Some that were dedicated jazz venues, like 98 Bottles, Donovan’s Circle of Fifths, Elario’s, The Crossroads, and Croce’s, evaporated. Dizzy’s, kept alive by the sheer will of musician Chuck Perrin, has lived through it all, although it’s changed venues many times, sharing space with a graphic arts studio, a culinary school, and, currently, the Musician’s Union Hall.

Having music clubs within other existing venues like hotels or restaurants brings its own headaches: music lovers will no doubt remember the harsh whirring of a Margarita being made during a ballad, or the steam of a café latte just when things were at their emotional peak in the music set. Since the Lounge is not attached to any other purpose, it is blessedly free of the clanking of food prep or the competition of noisy blenders. 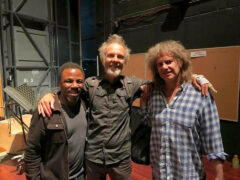 The Jazz Lounge does jazz. The offerings are eclectic, though—a sizzling set of Chick Corea’s music (plus some surprises) one week, Joni Mitchell’s jazz-tinged pop another. There is even a concert dedicated to the often-underestimated work of Joe Raposo, best known for his Sesame Street songs. Some shows have sold out the 40 or so seats.

“Some nights are sold out, some are lighter, but the audiences is finding us,” Leonard says. “It’s slowly, steadily getting to where I think that next year will be a good one.”

One way in which Leonard is attracting new listeners is by offering concerts that some people might not consider to even be in the jazz oeuvre. “I am programming and trying to do some different things,” he says. “We do a lot of tributes that widen the interest when they see you’re doing a tribute to Stevie Wonder or Sting; it doesn’t matter that it’s jazz or whatever. People love that music. It’s cool to be able to do that and maybe people who wouldn’t necessarily be into jazz will come because they like that artist.” 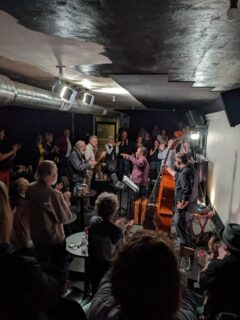 Leonard doing his thing to a packed house.

Musicians, both local and from elsewhere, love the club. “The Jazz Lounge is the place to go in San Diego to hear traditional and eclectic jazz music,” says Tasha Smith Godinez, professional harpist and faculty member at San Diego University. “The intimate atmosphere, delicious dinner menu, and fabulous performers bring a new vibe to the jazz club experience. Every time I am invited to perform at the Lounge, Leonard allows me the freedom to play music in my own style—whether that be jazz, avant-garde or Latin ballads. All the concerts feature San Diego’s best musicians making incredible music.”

Matt Falker, jazz vocalist and pianist, says, “The Jazz Lounge is a venue borne out of one man’s vision to start a jazz club during a pandemic! Leonard is fully committed to spotlighting both local and nationally known musicians. Patrons are treated to an AMAZING meal, an intimate seating arrangement where everyone is close to the stage, and the sort of uplifting, soul-filling evening that is uniquely served up through the art of jazz.”

Jazz educator and musician Kamau Kenyatta says this about the venue: “The Jazz Lounge is an intimate venue where dedicated musicians have the opportunity to play for equally dedicated listeners. The atmosphere allows performers to present thematic programming and original music.”

Keeping the club small was an intentional decision. “It’s a unique experience, because there isn’t really anything like it in town,” Leonard says. “It’s a listening space. You go there to listen. Musicians love it because everyone is listening to every word, every note, every sound. You can be dynamic on both ends of the spectrum—as soft as you want (no competing sounds), intimate, you’re right there with the musicians, and people want that. I love the big venues—the Shell, Humphrey’s by the Bay, Balboa Theater…we have a lot of nice, big venues, but that’s not something people can do on a weekly basis.”

Although he has a lot of club experience from which to draw, Leonard modeled the Jazz Lounge solely based on the space he had. “I’ve been to a lot of New York clubs, and I love them, but they pack ‘em in,” he said. I don’t want to overfill. It’s intentional that we don’t have it packed. We seat 40 comfortably with tables, and I’d rather add a second show than overfill the club.” If you want to be sure you never miss a show, season passes are available on the website. 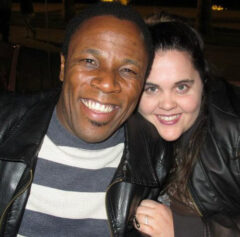 Leonard with his wife, Jerusha.

For a small club with no kitchen, meals seem like an odd choice, but the Lounge has partnered with Terra American Bistro to provide gourmet meals to guests who want to have dinner there first. Tickets for events can be purchased with or without dinner. Ticket prices vary, but are usually about $40 for the concert, or $60 for dinner and a concert. Some audience members may find the ticket price steep, but considering the caliber of musicians playing in such an intimate setting, it’s not. The privilege of sitting a few feet away from some of the best musicians in San Diego (and in some cases, the world) makes the price a small one. It’s like an all-access pass to greatness.

In fact, in January, the world-renowned Larry Goldings, composer and keys player, will be playing at the Jazz Lounge, which is quite a coup for a relatively new venue. Of course, Leonard Patton has connections. He’s played with jazz great Pat Metheny as recently as 2022 and frequently records with Peter Sprague, San Diego’s guitar legend.

As for eclectic programming, a November 25 and 26 show called The Telegram (“the band that could have happened!”) will be an imagining of the sound that a group featuring Paul McCartney, Jimi Hendrix, Miles Davis, and Tony Williams would generate. Apparently, the group almost happened, but the death of Jimi Hendrix derailed it. With no investors or landlords or corporate managers to answer to, the Jazz Lounge can program such eargasmic art.

Will the Jazz Lounge spark a renaissance in local listening venues? “I’m hoping that people get inspired and do what I’m doing,” Leonard says. “It’s not about me and my space. It’s about making the communities in San Diego thrive with music and art. We need more stable places that people can count on.”

Here’s a preview of what’s coming to the Jazz Lounge in November. Check the calendar for details.