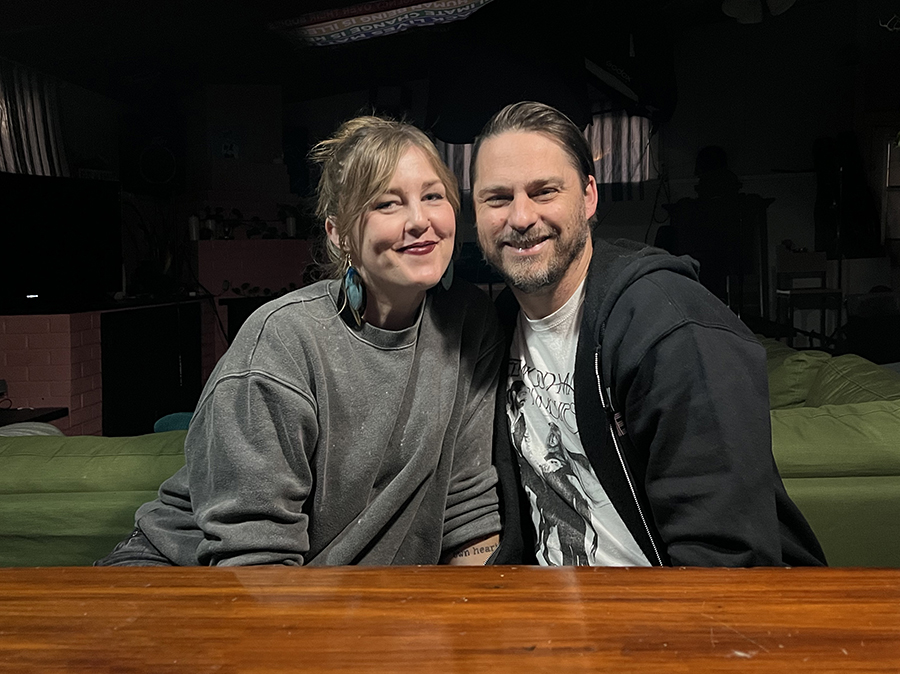 Ben with his wife, Karyn. Photo by Sande Lollis.

Writers Round San Diego is exactly what a singer-songwriter is looking for and, in fact, dreaming of: a place where fellow musicians are respectful and hold each other as equals and in high regard, where the audience wants to hear the stories behind the songs, and where people go to actually listen. The night begins with drawing three names for an open round, followed by a feature round of three pre-selected artists, and ends with another drawing for the final open round of three artists. In both of the open rounds each artist sings two songs, and in the feature round, they each sing four. In each round, the artists sit together on stage and take turns, one after the other, performing their songs. Most play guitar or the occasional ukulele; there’s a keyboard available for those inclined, and some bring backing tracks that get wired into the sound system.

I attended several times when it was at the Park & Rec, first as a feature artist and then as an open round draw. Right away, it was refreshing to meet and hear so many musicians I’d never heard before. It was a diverse group of ages, genders, ethnicities, sexual identities, musical styles, and levels of proficiency. In common was the attention given each artist when performing, the generous applause, and the obvious support.

Make no mistake, that kind of atmosphere doesn’t just happen. It’s a well thought out and conscious approach to achieving the kind of music scene that organizer Ben Grace Gilmore envisions for San Diego.

Collaboration and community building seem to be part of his DNA, at his very core. It’s what gets him going. Ben grew up in a tiny church community in Australia and knew very few songwriters. When his interests led him to participating in more contemporary music, he set up his radar and managed to build a community of more than 150 songwriters, and together they released six albums. That showed him what was possible. That was a start.

The church was made up mostly of Ben’s family. Being creative and artistic was something they didn’t understand, and he never felt he fit in or belonged. He says he supposes his religion these days would be universalism. He believes that everyone belongs, that we all have a place, and that our voice matters. He says, “It was important to me that when we built Writers Round it was a place where everyone actually felt welcome and embraced there, because I feel like that’s the world I want to live in, you know, where it’s not just old white guys like me. It’s easy to create that thing, really easy, but it’s not that interesting to me. So white guys also belong, they’re part of it.” 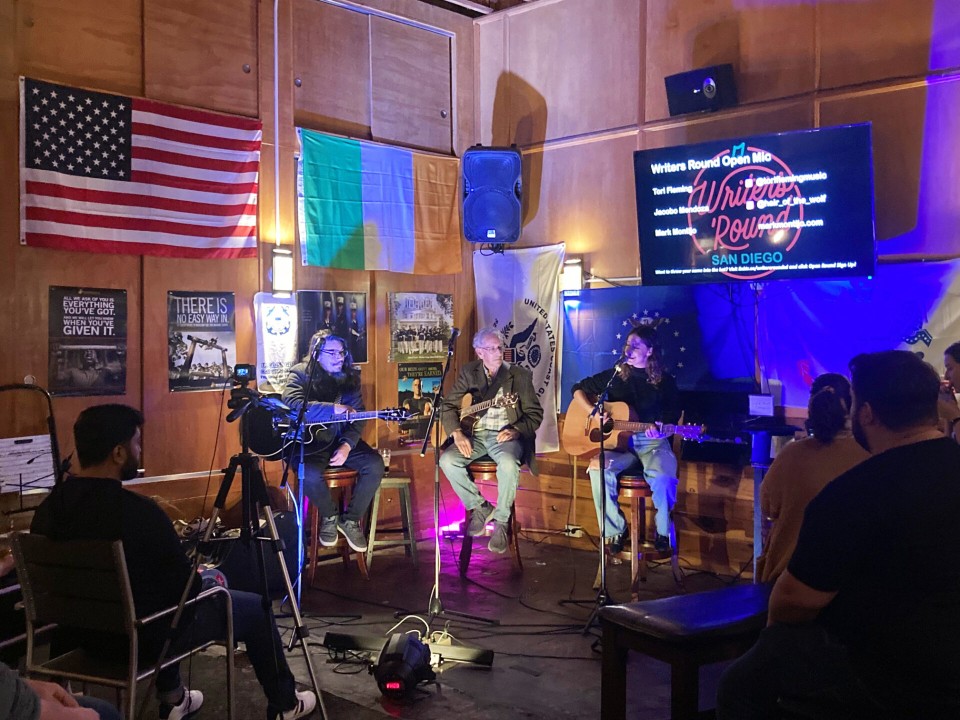 Mark Montijo and friends at the Writers Round. Photo by Liz Abbott.

When asked what brought him to the US, Ben quickly answers, “Music.” Although Australia has almost the same landmass as America, there are only 25 million people, which makes touring and the life of a musician hard. In 2006, he ventured to the US for the first time and found kindred spirits in the other musicians here. They were friendly and even suggested writing songs together, which had always been his dream and was exactly what he was looking for. He first lived in New York, and while living there, he began to wonder about the roots of his need for community. Having come from one of the most diverse suburbs in Australia, he realized that he just doesn’t see differences as threatening. In fact, he gets excited by diversity and tends to see everyone as his brothers and sisters, like the people he grew up with on the playground. “When I hear a sound I haven’t heard before, I’m curious.” Ben says. “I think for a lot of people when they hear something they haven’t heard before, haven’t tasted before, haven’t experienced, their first thing is, oh, I don’t know it, I don’t like it. I’ve always been like, I don’t know that and that’s interesting to me.”

Not knowing anyone in the city didn’t isolate him for long. Instead, he sought out like-minded people to start a songwriting community in his apartment building. They met once a month to share their songs, and it ultimately grew into the same kind of thing he had created in Australia. They went from a bunch of wannabe musicians to running Kickstarters and releasing a dozen records, to headlining shows. After seven years in New York and some time spent wandering through Texas and Colorado, Ben met poet and future wife Karyn Thurston Gilmore on Instagram. She suggested he give San Diego a try, “It’s not awful, so I hear, people like it here.” That was April of 2019, right before the pandemic hit.

I met with Ben and Karyn in the big back room of their La Mesa home, where there are three computer workstations, home studio gear, the setup where they produced a podcast during the pandemic, and lots of open space. They’re easy to be with. I felt completely at home and welcome. In fact, that was what I felt at that first open mic too, welcome as though we had met before, although we had not. I had watched as others arrived and noticed how Ben spoke to each of them as though they were old friends. That’s just the way he is. He says, “You belong because you walked through the door, you’re good, you get to behave how you want to behave. And there are contracts we have with each other, there are always boundaries, you know, that we treat each other kindly, with respect.” What a concept.

During our meeting he talked about how—for some people—collaboration is threatening. “There are some people who build their career and they’re just in their tower delivering the goods from on high, and they walk around the world trying to take what they can. And they’re welcome to it. Those people are also welcome in community. I don’t think they know what’s good for them. I just think they’re missing out on this thing, this community, which is rich and deep and interesting.” Ben believes in songwriters helping each other out, having each other’s back, that a rising tide lifts all boats. It’s easy to get swept up in the goodness of it.

They are two of a kind, Ben and Karyn. A big reason that things work well for them as artists is that they are both interested in stories. They find that’s where the intrigue is, where the art is, and they want to hear those stories. They want to know about who’s been here, what’s the musical legacy, how all the connections work among different musicians and artists, who works with whom, and all about that network that keeps the whole thing alive.

This past February Ben started talking to people about the scene, trying in earnest to connect, trying to find the places, the listening rooms. They had been up to perform at the Writers Round Los Angeles, run by Greg Gilman, and were moved by the experience. The room was warm and welcoming, and they were a bit surprised to find that everyone was actually listening. They found Greg to be an open-hearted individual and a fellow collaborator, and he encouraged them to start their own series in San Diego.

Through a connection with Josh José Williford at Acoustic Spot Talent, they landed at Park & Rec (in University Heights on Park Blvd.), which was the perfect starting place for Writers Round San Diego, and it was Karyn’s number one choice. Physically set apart from the main bar in a separate room, it had a stage and sound system, and plenty of room for an audience arranged in rows to do what they came to do: listen. After seven months they grew out of the space and began searching for another venue.

They were both familiar with the Adams Avenue music scene and Ben was admittedly obsessed with the whole strip in Normal Heights. It was like so many cities he’d visited around the world with their music districts, where you could just hop from venue to venue. His first and only full band show was at Lestat’s West before the pandemic hit. Then with Lestat’s off the table, and after longtime sound engineer and booking manager Lou Brazier passed away, they wondered who was now cultivating the scene and where it was. The area really hadn’t bounced back after the pandemic.

So, he and Karyn took a date night and walked it, going into every spot, sometimes talking with managers, and sometimes just connecting with folks. They looked at everything along the way. When they walked into the Ould Sod, Ben says, “I just had that feeling in my gut.” As they explored further, they opened the door at the back and were impressed with the space. They knew they could create their own culture there and they knew it felt right. After making calls and not getting through, they decided to go back and found fellow musician Sara Petite behind the bar. Ben exclaimed, “Oh, it’s one of our people!” So, Sara went to bat for them and made it happen. Writers Round San Diego opening night at the Ould Sod was held October 24, and it was packed. They knew they had found a home. They note that the series has “always been about trying to find and amplify the songwriter legacy in San Diego, and so being there just a few doors down from where Lou was doing his work at Lestat’s, and where all those important legacy pieces are, that’s what we want to honor, it’s like standing on the shoulders of giants.”

Loretta Lynn: A Special Tribute to the Queen of Honky Tonk

The Jazz Lounge: A Listener’s Paradise