February 2023
Vol. 22, No. 5
Tell Me a Story: A Tradition Immersed in History by Paul HormickAugust 2018
Examining Bob Dylan’s Love Sick Blues by Ted BurkeAugust 2018
John Densmore: An Invitation to Dance on Fire by Terry RolandAugust 2018
A Father’s Day Story: The Courtship of Harry Nilsson’s Son, Zak by Terry Paul RolandAugust 2018
Jazz 88 Keeps Pumping Out the Tunes: Station persists despite numerous challenges over the years, including Coronavirus by Michael J. Williams and Jim TrageserAugust 2018
Me and Ronnie Earl by Eric LiebermanAugust 2018
Lawrence Ferlinghetti: America’s Poet by Ted BurkeAugust 2018
Q & A with Gabe Lapano: After the Rain and Beyond by Andy RasmussenAugust 2018
Remembering Sam Hinton by Paul HomiczAugust 2018
Band of Brothers: The Liggins Brothers by Bart MendozaAugust 2018
Advertisements 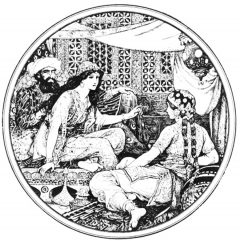 Once upon a time… Everyone remembers the magic of a bedtime story, when tales of princesses and witches transported you from your bedroom to a land of enchantment and happily ever after, or the camping trip when a well-told ghost story kept you quaking and sleepless with fear in your tent. From childhood onward we learn the power of stories — how they can capture our imagination and let us experience lives and even worlds beyond our everyday experience.

That first festival was a small affair, with no more than 60 participants telling their tales amid the hay bales and wagons that served as stages. Over the years the festival has grown. Today it draws thousands and is described as one of the top 100 events in North America. Now, throughout the streets of Jonesborough, the foundation sets up tent after tent, each having a schedule of storytellers. The only thing attendees have to do is to find a tent, sit down, and listen.

A couple years after the first festival, Smith went on to establish the National Storytellers Association, which has worked to foster storytelling and storytelling festivals far and wide. The association believes that in this age of computer screens and instant texting we are loosing our connection to stories, and hence our connection with each other. The Association believes that by fostering and encouraging storytelling they can help bring us back from a world filled with alienation and isolation and get us back in touch with our humanity.

In the beginning God created the heavens and the earth…
Story telling goes back to the very beginning. As soon as humans learned to speak, we were telling stories. What are called “oral traditions” were established in small communities and tribes, with myths, legends, and folktales being passed down from generation to generation. Besides the obvious entertainment value, these oral traditions helped people feel that they understood their world — why the rain fell and day followed night, why the seasons changed and why we are born, fall in love, and die. The oral tradition of a people was also a way of passing the values and world view of that group from one generation to the next.

Somewhere a long time ago paper and ink were invented; besides being used for double entry bookkeeping, they were used to record some of these traditional tales. I hope I don’t get in trouble with my fundamentalist Protestant friends by saying this, but many of the stories in the Old Testament are believed to have been part of the Hebrew oral tradition. The great epics at the bedrock of western civilization, The Iliad and The Odyssey, were told and retold by the poets of ancient Greece before being written down. The beguiling Tales of a Thousand and One Nights is most likely the very clever compilation of dozens of tales with origins in Europe, the Middle East, and as far as Japan.

The American version of the oral tradition is what is called a tall tale. These stories were told by cowboys and pioneers. Often having a bit of truth at their core, being based on real persons or events, the tall tale is filled with blazing exaggerations and fantastic situations. The hero of the tall tale usually possesses great strength or skill and accomplishes great deeds. The exaggerations of a tall tale are usually intended to be humorous, and at no time has the story of a tall tale been considered credulous. Tall tales give us a view and perspective on historical developments. The giant lumberjack Paul Bunyan and his companion, the giant blue ox Babe, are personifications of man’s ever-increasing domination of nature. And the story of John Henry illustrates the diminution of the human spirit by increasing industrialism. Despite their humor, most tall tales have a tragic element that further drives home their subtext.

A long time ago in a galaxy far, far away…
Scientists and researchers have investigated these most unscientific activities that make us human. One investigation shows us how essential stories are to our happiness. Prodding the pleasure centers of our brains, the parts that are highly active when we are involved in something that we enjoy, scientists have found that immersing ourselves in a story, such as reading a novel, watching a movie, or listening to a story, ranks among the highest of pleasures.

Another interesting find comes from the vast plains of China, where many people still lead lives in small farming villages as their ancestors did thousands of years ago. In Gengcun, a village of no more than 1,200 residents, a cultural inventory found 134 storytellers who told 4,300 distinct stories. Some of these storytellers could recall and tell dozens and dozens of stories, with one of the village elders being able to tell over 550 tales.

San Diego’s liaison to the National Storytelling Network, Marilyn McPhie, says, despite the long years of being organized, “We have a loose-knit group of storytellers here. We have no organization, no officers, no by-laws, no meetings, no guild. We’re constantly reinventing ourselves and our storytelling and moving into new venues and new fields. We’ll probably never be a highly efficient guild with membership dues and cards with expiration dates. We just tell stories, and that’s fine with us.”

McPhie started the process of becoming a full time storyteller in the mid 1980s. “I was enrolling my children in participatory preschool, and the administration said that the school really was participatory. I was expected to do something!” she says. Seeing the list of activities she could take part in, from sweeping the floors and cleaning the bathrooms, she picked being a storyteller. “That sounded easy enough,” she adds.

McPhie found that she enjoyed storytelling and had a talent for presenting a tale to an audience. She now describes herself as a full-time storyteller. For decades she has presented a weekly storytelling at the Penasquitos branch library. She has performed for an audience of 5,000, yet confesses that telling stories to a room of only 20 can be more rewarding. “In small settings like that I like that I can look into their eyes,” she says. Drawn to stories that feature irony and word play, her storytelling repertoire includes folk tales from the oral tradition, as well as a few personal stories, such as the day her TV hating father bought a television to watch the first manned moon landing.

Charles Johnson, a software developer by day, came to storytelling through music. “I was at Disneyland and I passed by one of the characters, Farley the Fiddler, and of course he’s playing the fiddle, and I thought ‘that looks like a really cool job.’” Johnson bought a ukulele and began to play around town. As time went by, he found that the bits of banter and stories that he told between songs were becoming more and more a part of his performance. Music still figures into what he does, but it is storytelling that makes up the main body of his concerts. He tells stories anywhere that an audience can gather, but can most often be found delivering his adaptation of the 1933 movie King Kong or another adventure story to a small group around a campfire. Johnson says that convincing people to attend a storytelling performance can be difficult, that most people have an image of an old lady rocking in her rocking chair and reading from a book when they think of storytelling. “That’s not what you should think at all,” he says. “At a storytelling concert you’re going to be entertained. You don’t have an actor on display for you. You’re going to see and hear all of the story your head. Storytelling is highly interactive and taps your imagination. That’s what makes it so great.”

This article first appeared in the San Diego Troubadour, October 2011.

A Story About Frequency Modulation