January 2023
Vol. 22, No. 4
Summergrass Welcomes Back Bluegrass Etc. and Virtual Strangers by Molly N. TenbrooksAugust 2018
Back with a Bang! Java Joe's Reunion at San Diego Folk Heritage by J.T. MoringAugust 2018
Book Review: The Philosophy of Modern Song by Bob Dylan by Ted BurkeAugust 2018
Rick Nash: Bass Man in Demand by Wayne RikerAugust 2018
Mod Revivalists the Trebels to Reunite for 40th Anniversary Show by Jim TrageserAugust 2018
If Music Be the Food of Love, Play On: Dually Noted Pairs Fine Food and Fine Music by Paul HomiczAugust 2018
Harold in the Land of Jazz by Bart MendozaAugust 2018
Sephardic Dance and Music by Yale StromAugust 2018
Loretta Lynn: A Special Tribute to the Queen of Honky Tonk by Terry Paul RolandAugust 2018
Ben Grace Gilmore: It's All About Building Community by Sandé LollisAugust 2018
Advertisements 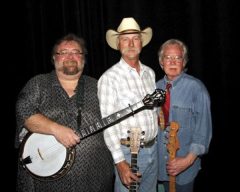 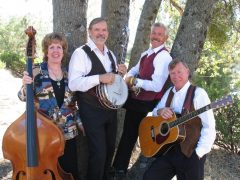 Bluegrass Etc., a Summergrass mainstay, is comprised of John Moore on guitar and mandolin, Dennis Caplinger on banjo and fiddle, and Steve Spurgin on bass. Rooted in bluegrass, these guys have evolved over the years into a much more dynamic and eclectic acoustic band. Playing this festival for 13 years, Steve describes it best, saying, “Bluegrass Etc. and Summergrass are joined. Many fans equate us with Summergrass and it’s a favorite for us.” The band all agrees that their favorite Summergrass memory has to be the very first year in 2003 when Byron Berline, Mark O’Connor, and Dennis played triple fiddles. Anyone who was there remembers this magical set. Steve was playing bass on stage and recalls, “The guys did a 30-minute rendition of ‘Sally Goodin.’ It was a such a treat to have those triple fiddlers together and the crowd was on their feet.”

Touring the world often, some of BGE’s other favorite gigs include the Beverly Folk Festival in England, the Tonder Fest in Denmark, and other gigs played in Sweden. “We’ve found bluegrass fans no matter where we have played,” explains Steve. “And the fans know great details about our music. It’s incredible.” Dennis recalls the BGE gig at the Toyko Disneyland in 1987 and their many European tours. Dennis adds, “As a touring band with time constraints, it is common to drive by many sights like Stone Henge, Normandy Beach, and even the Alamo without stopping. We drove by many places maybe three or four times before we actually had the time to stop and see them. I’m a huge history buff, so finally experiencing these sights were great.”

John Moore remembers a few other gig stories that have also left impressions. “There was a B&B we were housed at in Germany that had a clear glass door to the bathroom, with the toilet directly in front of the door, or the time I got stuck on an express train in Tokyo for three hours and couldn’t get off because it was so crowded. As I passed the station four times, the band stood there laughing each time.”

Growing up in Vista, teenagers John and his sister Julee began performing in the 1970s with young Stuart Duncan, now Nashville’s bluegrass fiddler extraordinaire. Soon after Duncan moved away, they met and began practicing with Dennis, who was also living in Vista. “This was the beginning of Bluegrass Etc.,” explains John. Early on, the band played a regular gig at That Pizza Place in Carlsbad every Saturday night, which went on for ten years, where pickers like Joe Maphis, Rose Maddox, and John Jorgensen, and youngsters Chris Thile and Sean and Sara Watkins joined them on stage. John notes, “With this talent and lots of great fans showing up, it was a unique gig and I have lots of great memories of those days.” Dennis also remembers those early days with BGE. “I learned that the band had to be great musicians, but we were also there to entertain, not just play music. That’s what I learned from John and Julee. And it has served me well.”

Wherever BGE performs, their fans are drawn to their relaxed and friendly stage presence. John explains, “It’s the way we were raised, it’s who we are. There is humor and banter. There’s enough fake stuff in the world, so why not get together with friends and play some music and be real, even if the friends you get together with are an audience.”

In total, Bluegrass Etc. has been together for 42 years and has stood the test of time as they deliver stellar musicianship and entertainment. And as Dennis points out, “It’s a blessing to play with folks who do both.” Three years ago their friend and bandmate Bill Bryson left the band, and Steve effortlessly stepped into that role. He first met Dennis and John when they were teenagers, and years later played with John in the band California. Steve is also a gifted storyteller and singer-songwriter, and performs with Sawmill Road, which is planning on recording a new project soon. “So keep your fingers crossed,” notes Steve.

BGE’s newest CD is titled Classics and is just that: classic tunes done straight and without too much glitz. And John has just completed a new solo project that he is very pleased with. “It’s a collection of songs and instrumentals I’ve always liked along with some original tunes–all with a flavor of bluegrass, but also a little cowboy flavor in there as well.” He also does soundtrack work and teaches at music camps across the country. Outside of music, John tours Europe, teaching equine sciences and horsemanship clinics as well as cow working classes at his Colorado home.

Dennis also enjoys a reputation as a much respected and well-known session musician. He has been instrumental in recording many of the Pickin’ On series of CDs as his session career unfolded. He also has a home studio where he records and produces many CDs, such as John’s new project. “I figured out that if I was going to stay here in So Cal and have a musical career, I had to be versatile,” he notes. He is continually doing session work and producing projects for other musicians as well as performing.

Celebrating 26 years together, the Virtual Strangers were originally formed in 1992 in Napa, California. There, banjo player Mike Tatar and mandolinist Jon Cherry worked together and also jammed together locally. When Vonnie Tatar joined them on bass, they booked a few gigs. As Jon recalls, “The three of us were trying to think of a band name without any luck, and Vonnie said, ‘What difference does it make? We’re just virtual strangers to most folks.’ And the name stuck.” In 1996, Mike and Jon were transferred to San Diego for their careers and reformed the band here. Mike remembers, “We were finally able to get Kit Birkett on board as our guitarist, and occasionally Mike Jr., my son, played fiddle with the band.”

For the past few years, the Strangers have also been the demo band at Summergrass where they demonstrate raffle instruments on stage by playing a tune for the audience. Vonnie explains, “We show our audience that these raffle instruments are high quality. And it’s always a blast to play Summergrass. There’s something special that happens at the festival, such a great vibe.”

The Strangers agree with BGE that their favorite Summergrass memory has to be that first year with the triple fiddlers set. Vonnie explains, “That first year put Summergrass on the festival map. As a result, many bands continue to request to play out here, and we’ve been able to host an incredible lineup of bands from all over the country on the Summergrass stage. It’s humbling to be a part of such a wonderful event.”

The Strangers have a huge stockpile of favorite gigs they have played in the past. Kit recalls when the Strangers played a children’s concert with the San Diego Children’s Symphony, featuring Mark O’Connor. “It was an unforgettable experience for us to play together with the symphony and Mark O’Connor.” Jon recalls the band winding their way through Utah, stopping to enjoy the beautiful national parks there, as they drove to play a festival in Fruita, Colorado. All of the Strangers are retired now and own motor homes. “We’ve traveled all over and performed many festivals, and have been fortunate to see the sights along the way. My favorite gig was playing for the tenth anniversary of the San Diego Sheriff’s Museum.” By request, the band came dressed in Old West attire. “There we were playing in our western garb with Kit and I as cowboys, Jon looking like Festus from Gunsmoke, and Von as a saloon girl. It was a great time,” recalls Mike. Vonnie’s favorite gig was the jam cruise they did each February where they taught jamming, performed and visited some of the port calls. “There were so many good times there over those years.”

Last fall, Mike and Vonnie moved back to Tennessee to be closer to family but have returned this summer to California to play a number of gigs. Looking to 2019, Mike notes, “It’s not out of the question that we’ll be here again next summer. We’ve had some inquiries as to our 2019 availability already.” This band configuration has been together since 2001 and, as Kit points out, “It’s been 17 years together and some work, but it has always been well worth it.” Mike adds, “We’ve traveled together from coast to coast, camped together, and shared life together for a number of years. I consider my bandmates like brothers.”

The Antique Gas & Steam Engine Museum is the perfect partner for Summergrass. As one Summergrass fan described this venue, “It’s like Disneyland for old people!” You can experience the blacksmith barn, the weavers barn, the old schoolhouse, the farm kitchen, the old car collection, the model railroad, the 1930’s gas station, Steam Engine Row, the vintage tractors, the Clock Museum, taste home-cooked food, and see the static farm equipment displays that all inspire a look into our history.

A Glorious Day of Blues by the Bay: The San Diego Blues Festival

The Sea Chantey Festival: A Lifeline to our Nautical Past