January 2023
Vol. 22, No. 4
The Sea Chantey Festival: A Lifeline to our Nautical Past by J.T. MoringAugust 2018
Back with a Bang! Java Joe's Reunion at San Diego Folk Heritage by J.T. MoringAugust 2018
Book Review: The Philosophy of Modern Song by Bob Dylan by Ted BurkeAugust 2018
Rick Nash: Bass Man in Demand by Wayne RikerAugust 2018
Mod Revivalists the Trebels to Reunite for 40th Anniversary Show by Jim TrageserAugust 2018
If Music Be the Food of Love, Play On: Dually Noted Pairs Fine Food and Fine Music by Paul HomiczAugust 2018
Harold in the Land of Jazz by Bart MendozaAugust 2018
Sephardic Dance and Music by Yale StromAugust 2018
Loretta Lynn: A Special Tribute to the Queen of Honky Tonk by Terry Paul RolandAugust 2018
Ben Grace Gilmore: It's All About Building Community by Sandé LollisAugust 2018
Advertisements 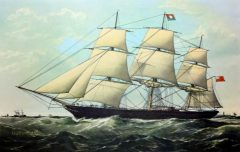 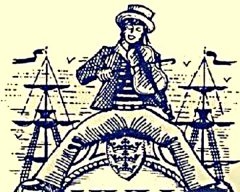 All Hands on Deck
My now-adult son has vivid memories of his fourth-grade overnight aboard the Star of India. He was assigned galley duty, which involved a special pudding, chasing rats* below decks, and standing watch at midnight looking at the stars. The Maritime Museum of San Diego has been serving up such historic memories to thousands of kids annually since its founding in 1948.

Sailing ships played an organic iconic role throughout the history of North America, the United States, California, and particularly San Diego. Sailing ships brought early explorers and later immigrants to our harbor, and brought the fish, lumber, and other supplies needed to build and sustain this port city. The Maritime Museum offers adults, as well as children, the sensory experience of that history. You can feel the wooden rails and hempen ropes; you can smell the salt air, you can hear the creaks of the wind in the rigging, the seagulls overhead, and–one day a year–you can hear a full afternoon of the songs that helped drive the sailing ships in and out of San Diego Bay through the 1800s. This year that day is August 26, coincidentally the 26th annual Sea Chantey Festival, hosted by the Museum in conjunction with San Diego Folk Heritage.

The Festival launches at 11:30am with the Jackstraws, a mainstay of the festival for many years. The group has a deep reverence for the material, extensive musical talent, and theatrics to spare. Jeff Pekarek, Jackstraws’ co-founder in 1979, and Loren Smith, member since shortly thereafter, probably have more musical experience with the Festival than anyone. Loren tells us, “Jackstraws mixes the traditional with the modern and uses animations and story as well as comedy to keep it interesting for an audience. The costumes, too, give it a look back in time, when function was as important as durability. Of course, we add color and some ‘pomp’ into it for the folks that expect to be entertained with a spectacle as well as musicality.”

Raggle Taggle and Kick Up the Dust are returning Festival performers. Raggle Taggle, like the Jackstraws, has been performing locally for decades and draws original inspiration from the British folk tradition of such bands as Fairport Convention. Also like the Jackstraws, they have expanded their musical repertoire to encompass other world music and have parlayed their skills into gigs at such institutions as Sea World and the Zoo. Kick Up the Dust has a nexus in the trans-Atlantic duo of Dave Fishwick and Peter Dyson, but any performance may find them aided and/or abetted by such San Diego luminaries as Paul Castellanos or Shawn Rohlf.

This year’s Festival features two bands: Sportive Tricks is a seven-person ensemble making the short hop to nautical tunes from classic Irish music, bringing with them the pennywhistle, bouzouki, and multi-voice harmonies. Gemini Junction comes to sea chanteys by way of traditional American folk music, with added authenticity provided by fiddler Annie Rettic, who once sailed her sloop from Michigan(!) to Florida’s Dinner Key with her husband and two school-aged kids, living aboard for eight months.

New to last year’s Festival, and to be reprised this year, is a segment called the Chanteymen, developed by Festival organizer Chuck Bernstein and featuring four solo performers including Kevin Roth. “The format will be a solo backed by the other three; two songs each in two rounds. The songs will be mostly traditional chanteys, but with a few ‘sounds like traditional’ (such as Ken Graydon’s ‘Whaler’s Tale’). This format should give us the more traditional feel of a chanteyman with the energy and sound of a larger group.”

Iron Men and Wooden Ships
A sea chantey (with various spellings, but pronounced “shanty”) is at its core a song developed and sung during the Age of Sail, mainly the 1800s, to assist sailors in their manual labor. Before motors and lightweight materials, there was a lot of heavy lifting to be done aboard ship! This included thick hemp ropes attached to wooden spars and canvas sails, and a massive iron anchor secured to the ship with a long chain. To move these things to their correct position for the current conditions took a concerted effort by a group of sailors working together. An appropriate song would provide a rhythm for the sailors to work to, as well as take their minds off the arduous task at hand.

The songs generally consist of verses or phrases sung by a leader (chanteyman), followed by repetitive refrains or choruses sung by the remainder of the workers. A good chanteyman was adept at adjusting the lyrics to reflect current events on or off the ship. True to folk tradition, the original authors of the songs generally remain unknown. The nature of the songs is that they neither needed nor received instrumental accompaniment.

A related class of songs was sung by sailors during their off-hours for entertainment. These didn’t have the same call-response or rhythmic constraints of the work chanteys, but did tend to reflect the interests and worldview of the singers. Sailing, drinking, and especially women, are recurring themes.

Jeff Pekarek, who has classical contrabass training and has his choice of any music in the known universe, notes the appeal of the chanteys. “What attracted me to the music was not so much the history of it, but actually the sound of it–the fact that it is a bit different melodically from other nineteenth-century music. I’m sure that comes from the fact that the roots are so exotic–these West African structures blending with Celtic fragments and old English scales, with even some Oceanic elements.”

Down to the Sea Again
The genesis of the Sea Chantey Festival can be traced to 1992. Joe Ditler of the Maritime Museum developed the concept with Dave Kendall of the Jackstraws, and Joe reached out to Chuck Bernstein at San Diego Folk Heritage to help execute the vision.

Chuck has been organizing the festival every year since. The festival quickly drew acts from as far as England and Australia, and attracted an ongoing presence from San Diego folk music stalwarts such as Sam Hinton, Johnny Walker, and Ken Graydon, all remembered as iconic talents immersed in the folk tradition. These performers are gone, but the Jackstraws carry on the tradition, with the next generation of performers stepping up to help wave the flag (or hoist the ensign, to stay in the vernacular).

Loren Smith has played the Festival since the early days and provides one of our last direct links to the historic chanteymen. “One of my favorite chanteys was taught to me by the last living chanteyman aboard the tall ships: Stan Hugo. It’s titled ‘Rolling Down to Old Maui.’ Having learned from the ‘real deal’ made a huge impact on my desire to continue with this form of music.” Loren will be performing again this year with the Jackstraws as well as in the Chanteymen segment of the program.

It’s a damn tough life full of toil and strife
We whalermen undergo
And we don’t give a damn when the gale is done
How hard the winds did blow
‘cause we’re homeward bound from the Arctic ground
With a good ship, taut and free
And we won’t give a damn when we drink our rum
With the girls of Old Maui

August 26 is your once-a-year opportunity to experience the living tradition of this piece of American history, on a wooden deck under canvas sails, in the salt breeze, hearing sea chanteys as they were sung 100+ years ago. Plus a little “pomp,” and hopefully minus the rats.

* I’m not sure we can trust this 15-year old memory, but even if true, the Maritime Museum has had plenty of time to rectify any rodent problem.