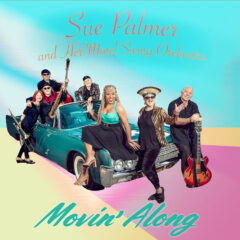 Anyone who hasn’t yet familiarized themselves with the rumbling rhythm and sway of pianist Sue Palmer and her Motel Swing Orchestra, you need to do two things. First, kick yourselves for not yet getting in the groove with his keyboard mistress’ magistral sense of the galvanizing groove. Seriously, the music is that good. Second, get on board for the rollicking wonder that is the music played and recorded by this band, this indispensable asset to the glorious San Diego paradise we have the pleasure to live in. The sunny days and the beaches that meet the boundless embrace of the Pacific Ocean are only enhanced with the rejuvenating jazz, jive, and boogie by Palmer and her peerless ensemble around the county and the world beyond. She has over 15 albums to her credit, and for a blues and jazz fan as yet not familiar with the energy she and the Motel Swing Orchestra provide, Gems Volume 1 and Gems Volume 2, a couple of generous compilations from several of her past albums, are choice place to begin the discovery.
Fortunately for the world there is a new release from this prized ensemble, titled Movin’ Along, a five-song EP (extended play) of additionally inspiring jazz-blues, with Palmer’s usual side players framing the songs with an assuredness that’s both rollicking and tight. Assisting Palmer are her usual posse of A-Listers, including April West (trombone), Johnny Viau (saxes), Steve Wilcox (guitar), Pete Harrison (bass), and Sharon Shufelt (drums). The city, the state, the country, and the world itself become better places to live as the combined might of this soulfully seasoned combination of musicians accentuates, enhances, underscores, and revels in Palmer’s hard-driving piano initiatives. You close your eyes and seem to slip back to an era of glitter domes, dance floors, and stomping Kansas City-style jazz in fine feathered and tuxedoed elegance.
Movin’ Along has a spectacular new addition to esteemed Sue Palmer and her Motel Swing Orchestra with the arrival of singer Liz Ajuzie (cover story this month). Ms. Ajuzie is a revelation, possessed of a full-bodied voice that has a sure, subtle, and intuitive approach to the blues in all its varieties, whether medium shuffle, low-down and gritty boogie, mournful slow blues reflection, or a staggering up-tempo blast that blows the shingles off whatever building is housing this powerhouse band. The five superbly curated songs on Movin’ Along showcase her range. She is especially effective on Nina Simone’s bittersweet blues ballad “Do I Move You.” Framed with sharp blues fills from guitarist Wilcox, the vocal is a hesitant murmur at first, a reluctant confession of hurt, but that evolves in power and conviction to a higher volumed sense of declaration of regret and resentment over a missed lover. A wonderfully subtle use of vocal theatrics, to which Wilcox takes a solo, is a blues guitar evocation of the sweetness and sting that mirrors the singer’s muted dramatics. Elsewhere, Ajuzie raises the mood with her own song, “Locked Up in Georgia.” An ambling boogie with a sassy sway to the tempo, it’s reported that the singer wasn’t actually in a Southern state jail but had heard a story that inspired her to write the song. Her voice swoops around the lyrics, falling hard on some words and rising high, nearly giggling on others, a a narration of his bad luck for imbibing out of bounds in the wrong place at the wrong time and spending the lock up time contemplating a return to California so he can have his whiskey and glass of wine in peace, unbothered by the local police. The good humor in the expert sweeps of her voice is infectious. Johnny Viau’s saxophone solo is sass and sizzle itself, fine and fitting for the song.
“Last Call,” a torch song with a slightly tango-ish feel to the pulse, is a choice reading of a reflective mood that recollects the consequences of keeping one’s one own consul. In matters regarding one’s choices in love, friends, places of residence, and occupation, this a frank and agreeable yet stern message to not feel pity for someone who regrets none of the hard knocks that have come their way. Ajuzie sings it strong but restrained, a refreshing take on what might have been a vehicle for gamy melodramatics. Her singing is stunning. A brief and finely picked guitar solo from Wilcox in the middle section is the pause that refreshes, one might say—the lull in soliloquy that allows the vocalist to gather her thoughts on the matter of how one’s lived their life.
Movin’ Along concludes with a low-key piano groove, the title tune, a boogie, a shuffle of sorts, gently played, with the band members singing the title as a blues Greek chorus, informing you they are moving along, indeed, on to the next band stand, the next set of songs to learn and write. Sue Palmer and her Motel Swing Orchestra are swinging for the fence, always, and with prime vocalist Liz Ajuzie it seems we’ll be seeing more long balls landing in the high seats.

I Had a Dream: Songs of an Immigrant