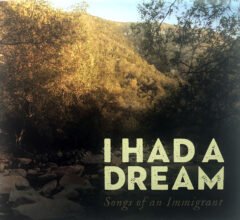 I Had a Dream: Songs of an Immigrant is a ten-track compilation that puts to music the poems authored by Betty Karon Hertz, documenting her impoverished childhood in Russia, her daring escape during the Bolshevik Revolutions and her life as an immigrant in the United States during the early 20th Century. The project became a family affair as Hertz’ granddaughter, Ruth Hertz Weber, penned the musical arrangements and provided all the piano and keyboard parts behind the mellifluous soprano voice of Hertz’ great-granddaughter, Emilia Lopez-Yanez. The compositions are bolstered by a mini orchestra of bass, violin, flute, percussion, guitar and cello with Lopez-Yanez as a principal soloist on oboe.
Mostly a home recording by these two San Diego County residents, the mix and final result is excellent with soothing polyphonic orchestrations supporting Hertz’ lyrics which alternate between verse and diary. The opening track, “Mushrooms” tells the story of Hertz’ picking mushrooms in a forest to avoid family hunger. Without the distraction of drums, Lopez-Yanez’ angelic voice is front and center floating amid a lilting New Age accompaniment, immediately reminiscent of early Joni Mitchell recordings.
“I Had a Dream” and “I Am A Tree” are mostly set against a haunting minor key pedal tone drone supporting the narrative in both the former: “I had a dream and it was white… that I was born to write” and the latter: “I am a tree in the trenches…and I enjoy the fruit that grows on my beautiful branches.” “The Six-Day War” is set against a similar background with Lopez-Yanez’ somber oboe tones striking a serious tone. “On Yom Kippur day…our people went to the temple to pray…and all of a sudden they heard a cry when the bullets began to fly.”
The narrative “Dear Ruth,” set in a gentle regal march, is Hertz’ congratulatory narrative upon granddaughter Weber’s graduation day. “We wish you everything you might need in your life to succeed…love grandma and grandpa.” The tune “My Darling” is Hertz’ reflective memories looking back on life with her late husband. “For sixty years we had a life together…not a minute’s regret from the moment we met,” followed by “Back In Your Younger Days,” (the only words not written by Hertz but by Weber as a nostalgic song written for her grandmother when she was still alive) emphasizes the catchy verse: “back in your younger days you sang…back in your younger days your voice was clear as a bell…now there’s only the past to retell.”
“Why Am I Here?” is a fitting close to this wonderful tribute with the dulcet tones of Lopez-Yanez’ oboe and golden voice in tandem with Weber’s piano bringing down the closing curtain against Hertz’ final existential text: “Why did I come?…Why am I here?… to look around…then disappear.”
This mesmerizing recording would seem to be a perfect fit as an accompanying musical score for a theatrical production based on Hertz’ text… so listen up San Diego Repertory Theater, this could be a winning production in the making!

SUE PALMER AND HER MOTEL SWING ORCHESTRA: Movin’ Along