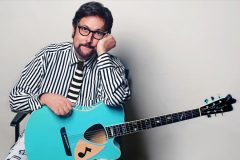 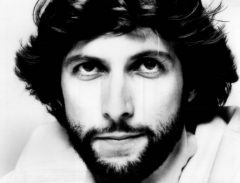 Virtually everyone in San Diego had their Stephen Bishop story in the late 1970s. I had mine! At the time I was a self-styled rock musician at Grossmont High School. I played some guitar and sang a set of Dylanesque songs with the five flat notes I could hit. Yet, there were enough polite, fellow students who could tolerate me. So I wound up at many a Grossmont HS house party, singing my songs in somebody’s living room. Needless to say, once, I remember finishing a set and taking a break. And a girl came up to me, a girl I secretly liked, and said, “Bob Dylan is so 1960s. Why don’t you play “On and On” by Stephen Bishop?”

He got an early taste of the limelight when he appeared on the Johnny Downs Show at nine years old. Johnny Downs was a big, local celebrity in San Diego at the time with his own variety show for kids. Stephen remembers sharing the stage with the Oscar Mayer mascot, a little person dressed as a hot dog.

Bishop was in junior high when the Beatles appeared on the Ed Sullivan Show. The British Invasion proved to be a life-altering experience. “I was a newspaper boy,” Stephen says. “While on my route, I saw a guy and a girl in a car listening to ‘I Want to Hold Your Hand.’” Putting two and two together, he quickly concluded that music was a good way to meet girls.

Soon afterward, his older brother bought him an electric guitar and Stephen started to figure out how to play on his own. He learned to play the British stuff: the Kinks’ “All Day and All of the Night” and “Gloria” by Van Morrison’s Them. He was also playing Southern California surf guitar.

Unfortunately, Bishop’s stepfather, an opera singer and teacher, didn’t take too kindly to rock ‘n’ roll and the new British sound. “I had to hide my guitar and practice and write songs in the closet.” It was difficult to keep his affinity for British rock ‘n’ roll a secret, however. He began pronouncing his name “Stave” instead of “Steve.” He grew his hair out and began collecting Beatles trading cards. And, most prominently, he began speaking with a British accent. All the while, he was writing songs and progressing on the guitar.

Influenced by seminal San Diego rock band the Other Four, Stephen and his neighborhood friends formed the Weeds while attending Crawford High School.

Living close to San Diego State proved fortuitous and the Weeds made a decent name for themselves, playing Frat parties, dances, and venues along El Cajon Boulevard. At this time, they also entered a Battle of the Bands competition in Clairemont, winning second place. Their set included some early Stephen Bishop originals. And when the judges were handing out the awards, one commented to Stephen that he was going to be an accomplished songwriter someday.

At this time, he had another brush with music stardom when he met Ray Charles at the singer’s Tangerine Studios.

The Weeds broke up as high school came to an end. In 1970, Bishop realized that if he was going to become that accomplished songwriter, he would need to pack up and move to L.A. He would spend the next several years, walking all over Hollywood and knocking on doors.

“I lived in a motel when I met Milt Rogers at Dot Records.” Then, Bishop got a job making $50 per week as a staff songwriter at Edwin H. Morris Publishing. “I’d write silly songs with names like ‘A Hair in Your Enchilada’ and ‘Beer Can on the Beach.’” At this time, he wrote “Daisy Hawkins,” a song recorded by Jerry Cole.

Finally, his friend Leah Kunkel, whose sister is the late Mama Cass, slipped some of his demos to Art Garfunkel. Garfunkel recorded two of Stephen’s compositions: “Looking for the Right One” and “The Same Old Tears on a New Background” for Garfunkel’s platinum Breakaway album in 1975. Soon, Bishop was signed to ABC Records to record his own album, which became Careless, released in 1976. All in all, it took Bishop six years to break into Hollywood and finally make it.

Careless went Gold, buoyed by the two singles “On and On” and “Save It for a Rainy Day.” Stephen’s second album, which refers to his nickname, Bish went Gold in 1978.

Over the next 40 years, Bishop would release 19 albums, including his just-released We’ll Talk About It Later in the Car. He’d record and perform with an A-list of other artists, including Phil Collins, Eric Clapton, and Sting. And he’d have his songs covered by a who’s-who of popular music: David Crosby, Kenny Loggins, Johnny Mathis, Steve Perry, and Barbara Streisand plus nearly two dozen others.

Of course, “On and On,” which charted at #11, continues to be his signature song.

He has two Grammy nominations and one Oscar nomination. Phil Collins and Eric Clapton have loudly praised him as a songwriter. Along the way, he was mentored by Chaka Kahn’s manager Bob Ellis, Simon and Garfunkel’s producer Roy Halee, and E.Y. Harburg who co-wrote “Over the Rainbow” with Harold Arlen.

“To write good songs, you have to get your heart broken,” says Bishop. If that’s the formula, it’s obvious that Stephen has taken the heartbreak to heart. “I put a lot of time into songs,” he adds. It shows. Stephen is viewed as a craftsman within the songwriting community. Rooted in those early rock songs that were written to get the girls, his songwriting brims with the various stages of romance, from love found to love lost. He also isn’t afraid to reach back into the American Songbook and sample influences from a bygone, pre-rock ‘n’ roll era.

In addition, he’s acted in and written music for several major motion pictures, working with John Landis on four movies including Animal House, Blues Brothers, Kentucky Fried Movie, and Twilight Zone: The Movie. In one iconically-1970s moment, Bishop is seated playing folk guitar on the stairs of the Animal House fraternity when John Belushi, clad in toga, grabs the guitar and smashes it. He has also acted or provided music for several other movies including Tootsie, White Nights, and Somebody to Love. Stephen’s performance of Dave Grusin’s “It Might Be You” for the mega-hit Tootsie became an instant 1980s classic. Most recently, he wrote “Almost Home” for the 2018 remake of the movie Benji.

However, he’s also very proud of the “quirky” aspects of his career. He used to do a lot of fundraisers and tennis tournaments and met a lot of the celebrities who also participated. One of his favorite memories is once playing for Patty Hearst, following her famous foray into radical politics.

Bishop has steadily released new material over the last four decades, averaging a new album every couple of years. The year 2019 proves no different and he has just released a new album and a new collection of songs We’ll Talk About It Later in the Car. The album includes a recording of the Benji theme “Almost Home” along with three cover songs. But it also contains nine new songs that stretch across the pop music palette.

“In Dreams I Fly,” one of the covers, is soul-searching, introspective, and almost psychedelic at times. “One in a Million Girl” brandishes Bishop’s Top 40 chops with bubblegum perfection. “Like Mother, Like Daughter” takes the listener on a ride to the country charts while demonstrating Bishop’s storytelling talents, developing a narrative about life as it is passed down from one generation to the next. “In Love with a Violent Man” furthers the journey down that country road, this time exploring, through brilliant storytelling, the more brutal side of American relationships. “Nora June” is about love lost. So is “French Postcards,” which musically hints to the accordion-infused “musette” of Parisian sidewalk culture. “Tiny Pillow” drips with love and longing. Again, to write good songs, you need to have your heart broken. That motto is apparent on We’ll Talk About It Later in the Car.

However, after 40 years and counting, Stephen Bishop’s first hit “On and On” continues to be the song that most defines his career and public persona. “I wrote it living in Silverlake. My landlady had lots of exotic flowers. They made me want travel somewhere else.” Traveling somewhere is what he has done indeed.

In fact, he’s now writing a book about his travels, a collection of personal, behind-the-scenes stories aptly titled On and Off. Next year, 2020, will mark 50 years since Bishop started pounding the pavement along the Sunset Strip. And after 50 years of knocking on doors, attending awards ceremonies, recording, and touring, he has the stories to back up a fabled career. There are stories about meeting fellow songwriters such as Michael Sembello, who wrote and recorded the hit “Maniac” for the movie Flashdance. And there are stories about his encounter with music royalty, such as the time he was seated next to James Brown and a date at the Grammy Awards. “The book contains crazy, interesting things,” says Bishop.

Dedicated to the quirkier views of the world, today he enjoys reality shows such as Dr. Pimple Popper, Naked and Afraid, and 90-Day Fiancee. These days, “I’m kind of a home body. I stay at home with my dogs.”

He’s also performing and doing shows. In fact, Bishop is no stranger to touring, having performed in South America, Europe, Japan and, as he proudly adds, the Philippines 11 times. “The theme from Tootsie ‘It Might Be You’ is on every jukebox in the country.”

His next big show is at the Grammy Museum in L.A. on November 7. Tickets can be purchased online including at Stephen Bishop’s official website. And he’s set to play on the ’70s Rock & Romance Cruise scheduled for February 2020.

However, don’t call him a “’70s singer.” “I’m an anytime singer not a ’70s singer.” By the longevity of his songs and his popularity, that might be truer now more than ever. Regardless which era you place him in, Stephen Bishop is a really nice guy who writes and performs some very nicely crafted songs.