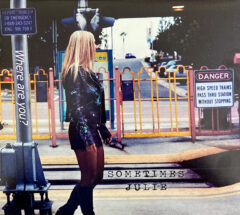 The newest album by Sometimes Julie is Where Are You? The band is built around the impressive vocals of Monica Sorenson and the songwriting of Sorenson and Rick Walker. The band’s sound has been evolving on the last several releases (including 2018’s Breaking) into a powerhouse rock outfit, with songs built to showcase her singing, riding the crest of legions of guitars and keyboards. The group on the new disc, besides Sorenson’s vox, includes Walker on guitar, vocals, and percussion, while the lead guitar and vocals are handled by Alberto Moreno. Anthony Sarain adds keyboards and sax. Bruce Paul Allen on bass and Dave Fuller on drums are the rhythm section, and this project also includes seven guest musicians, with Andy Machin, Michael Heater, Bobby Cressey prominent. Allen and Machin make co-writing contributions to some of the tracks.
The sound here is not soft rock, but a band that recalls the better days of ’70s and ’80s power ballad rock without the excess of many hard rock bands. Sorenson has the pipes to command the stage and studio, and the arrangements include the sizzling guitar licks and driving drum pulse that transform many of the dozen songs here into four-minute anthems. The set gets a rising kickoff with “She Can’t Kiss You,” about how a rival for her man’s affection “Can’t love you like a sinner.” The song throbs with a chopping rock groove that finds Sorenson soaring while giving hints of such influences as Ann Wilson, Pat Benatar, Shirley Manson, and others.
“Knew It All Along” backs off the throttle just a tad, with lyrics (included with the superb artwork) that include her pledge to hang in for the duration, with a lover whose commitment level is up in the air. These songs are fully produced, wall to wall arrangements that harken to back when the most popular music was played on classic rock radio, where a rousing tune like “If Only” might be a single candidate.
“As Good a Day as Any” is a change of pace that showcases Sorenson’s pipes on a slowed-down ballad, as she says goodbye to a wayward lover, “Wish I could excuse your behavior/ Blame it on the drinks and drugs/ And your ever-troubled mind.” Another breakup tune, full of metaphors, is “Walk Among the Dead,” about the emotional numbness when giving up the ceaseless battles of life and love—while expressing envy for the zombies who don’t need to breathe and feel. “Quiet” is another tune that takes a different approach, a nifty rocker with sax and lead guitar fills as Sorenson sings of bees, wolves, and bears that won’t give her any rest from their noisy cacophony that causes her to doubt her sanity.
There is a lot going on in “Arachne’s Pride/Minerva,” which evolves from some wonderful flamenco-flavored acoustic guitar by Machin, joined by another wooden instrument. After a minute, the guitars become overdriven electric slides, and the tempo picks up as Sorenson is flexing her vocal power and desire to “Let me be small again, invisible even/ And go where the sun goes when it’s going down.” There’s more nice lyrical meaning in “Lost Art,” a mid-tempo song with post-breakup comparisons to a failed relationship as an art gallery with no pictures on the walls.
Where Are You? is a triumph by Sometimes Julie, a must have for fans of female-fronted rock.

BE MINE PHANTOM VALENTINE: End State