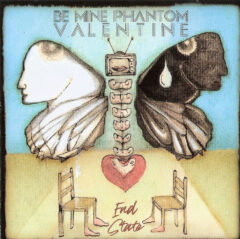 End State is the debut by local alternative rockers Be Mine Phantom Valentine. The nine-track project was put together by Dean and Wes Primicias, who wrote the material with help on one song, play all the instruments, and recorded in a home studio. It is a collaboration with co-producer James Doviak (guitarist in British indie rocker Johnny Marr’s band), and the sound is a dense brew of such influences as synthesizer-driven New Wave bands like the Call, the Fixx, and even postpunk bands like the Cars. Harmonies are worked into the mix, and there are some other surprises, including an ethereal-sounding synth instrumental, acoustic guitar-based quieter folk pop, and heavily arranged rockers that sound like they might be outtakes from an XTC project. The band sounds like it hasn’t quite decided on an identity, but some of the material is arresting, with interesting lyrics (included in the artwork).
The set blasts off with “I Never Dream,” a tune that has a strong rhythm guitar line, and the pound of synthesized drums; there are nice touches like spaced-out reverb in the choruses and a manic-sounding guitar solo, while the lyrics are centered on how we are all in the midst of a computer/video-fueled collapse, “Video surfing on video waves that are crashing in.” “Just Breathe” is also elaborately produced, with pounding kick drum four to the measure and a vocal track that keeps asking the listener what they paid “for the green dollar.” The song wants to be an anthem and has most of the scale to make that happen.
Another bit of social commentary is heard on “The Wall,” dressed up by some tasty harmonies that might sound out of place on a New Wave-style track, but here they add to the dynamics. “Who Are You Inside” features the kind of mellotron-sound keyboard that’s a throw back to the ’70s and ’80s, but sounds refreshing joined to close harmonies and other effects. The next tune, “The Waltz,” is just that, an instrumental dance between piano and electronic keys in three-beat time that builds into an impressive crescendo—and instead of sounding like filler, makes an interesting addition to the other musical statements.
A quirky guitar figure ushers in “Suffering Fool,” which is back on the accelerator behind lyrics that point out the futility of modern life, “You stood me up and shot me down/ You fixed me up and brought me down.” Furiously strummed rhythm guitar helps “I Was Afraid,” but ultimately the song about being reluctant to open up “Because sometimes I can’t shut that door.” The set wraps with “On Your Own” and it sounds like a cut from a different project. Fingerpicked acoustic guitar, simple melodica-sounding keyboard licks and a lyrical message about joining the singer in defeating loneliness join for an interesting song that shows another side to the band.
Be Mine Phantom Valentine have put forward an impressive debut with End State. Building on established styles and instrumentation, it makes the most of them for an entertaining listen.

SOMETIMES JULIE: Where Are You?