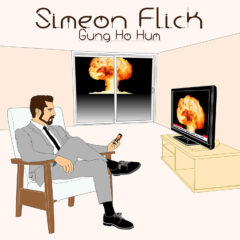 Simeon Flick is a San Diego guitarist and multi-instrumentalist extraordinaire who comes to the world with his ninth studio album, Gung Ho Hum, a heady and sometimes overcrowded release of relentless eclecticism. There is a generous portion for whatever one’s tastes happen to be it seems, with the atmospheric tone poem of the opening track “Singularity,” with its quizzical syncopated rap vocal through the scorching hard-rock blistering of “Bad Lot” (rhythm and blues funk joined with power chords and a fine and nasty guitar solo) not to mention the high-strung Hendrixisms that tattoo “Oh Please” or the shape-shifting state of “Careful What You Wish For,” where metal guitaristics give way quickly but smoothly to soulful harmonies over an accelerated dance floor groove. Variety is the name of the game of Flick’s stock in trade, but there is more, much more here than simply trying to please the fickle listener’s ear. At its best moments—which are many—Gung Ho Hum is an imaginative blending of elements; transitions between styles are smooth, congruent despite their seeming musical disparity among the sounds he displays. It’s worth noting that the songs wide-ranging material was entirely written, performed, produced, and mixed by Flick, with some horn assist from Matthew Stewart). The one-man-band tradition in pop music has been a phenomenon that has rarely impressed me—for all the praise that stalwarts like Paul McCartney or Stevie Winwood have gained for being able to multitrack different instruments (usually guitar-bass-keyboard-vocal-sometimes drums combinations), the music seemed half-baked, rather gutless. Flick is in the upper echelons of the one-man-banders, whose sparse ranks include Todd Rundgren (1973’s A Wizard, A True Star) or latter-day Yes guitarist Trevor Rabin on his first solo release (1978’s Trevor Rabin). As with these artists and albums, Gung Ho Hum maintains a solid live-band feeling; the engineering and sound mix achieve a blended unity. There is a grainy element to this inspired selected olio that keeps the energy high, the vocals buoyant, the flash and fire alluring. Flick keeps it moving, keeps it tight, keeps it grooving.