February 2023
Vol. 22, No. 5
Showing the Love: Friends of STEVE WHITE to Gather for a Day of Art and Music by Paul HormickMarch 2015
Jeff Beck: A Tribute by Ted BurkeMarch 2015
Marcus Petronius Bashore: The Best Seat in the House by T.E. MattoxMarch 2015
Pacific Wave: A Surfin’ Safari March 2015
The Winter Dance Party 1959: The Night the Music Lived by Terry RolandMarch 2015
Back with a Bang! Java Joe's Reunion at San Diego Folk Heritage by J.T. MoringMarch 2015
Book Review: The Philosophy of Modern Song by Bob Dylan by Ted BurkeMarch 2015
Rick Nash: Bass Man in Demand by Wayne RikerMarch 2015
If Music Be the Food of Love, Play On: Dually Noted Pairs Fine Food and Fine Music by Paul HomiczMarch 2015
Mod Revivalists the Trebels to Reunite for 40th Anniversary Show by Jim TrageserMarch 2015
Advertisements 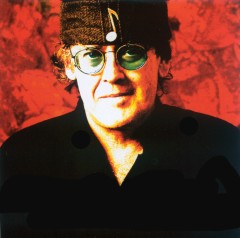 Steve White, who died in 2011, was a powerhouse musician, sometimes called a one-man band 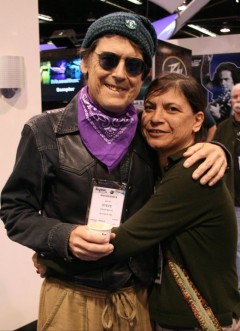 Steve and his life partner, Alda, at the NAMM Show, 2011. Photo by Lois Bach.

On the 15th of this month, the second annual Steve White Art and Music Festival will be held at the Seaside Bazaar in downtown Encinitas. Organized by Alda Leal, Steve’s life partner, and other old friends of the singer/ songwriter, music and art will be celebrated from 9am-4pm in the afternoon. There will be a stage for a talent showcase, and artists and craftsfolks will have booths displaying their arts and handicrafts. Music continues later in the evening, at 5:30pm, with a couple of bands performing at the Encinitas Library. There will also be a showing of Clint Burkett’s documentary about Steve and his art and music: Painting the World With MusicÂ  at the library.

We all remember Steve as a powerhouse of a musician, singing songs about funky kung fu copper pilots and livin’ large in his Chevrolet Malibu; we remember his powerful harp playing, funky lead guitar, and the driving rhythm that his feet stomped out on his percussion board. I guess we all imagine that Steve had been this one-man-band since he entered his first elementary school talent show, but he did not always perform in this unique style.

Before he moved out west, Steve had been a slide guitar player in a number of bands in the Boston area. No harmonica and no percussion with his feet. By the time I met Steve, decades ago, he had evolved into a close approximation of the blues powerhouse that he came to be. The biggest difference was that there was no percussion board. That came several years later. The other big difference was that Steve always performed standing up. As he sang or blew the harp, he rocked back and forth, stomping on the stage or floor of the coffeehouse where he was playing. It was pretty rudimentary, the clog meets floor sound often being something of a whack… whack… whack… sound underneath the singing and guitar.

Steve relied on the floor or stage to get the sound of his clogs across. He didn’t put a microphone on his clogs or amplify them in any other way. Sometimes when he would perform in a place where there was carpeting, the clogs were pretty muted and sometimes completely inaudible. I once asked him why he stomped with his clogs. The most he ever said about it was that, “You’ve got to give your audience something, something a little more.” If he had told me when he first stomped out a rhythm with his clogs, I can’t remember now.

Steve’s guitar playing was a little different back then, too. For anybody who listened closely to Steve’s guitar playing or watched his hands while he played, we know that Steve eschewed playing with a pick or plectrum and that his right hand worked in a manner of hitting and plucking the strings close down to the bridge of the guitar, a real intricate and funky style of playing. Steve played a bit like that way back when, but he also strummed the guitar from time to time. If you go back to one of his earliest recordings, The Works, which, in full disclosure I play string bass on, you can hear Steve strum on the songs “Cubano” and “Allende.”

The songs Steve sang were a little different back then, too. Steve has always written some really, great songs, but during the late eighties and early nineties, Steve had not written all that many songs himself. While we think of Steve as being a quintessential songwriter and performer of his own songs, his set lists back then were mostly filled with cover tunes.

Now here’s the thing. Steve sang everything. He, of course, sang blues and old folk tunes, which he called Americana, the basis of his style. But Steve sang pop tunes, old-time jazz standards, even tunes from Broadway musicals. A set by Steve way back when might include “Love Potion Number Nine” and the Depression-era hit for Artie Shaw “Deep Purple.” For a brief time Steve, “Bongo” Bob Goldsand, and I formed a trio, and one of our biggest audience pleasers was a deconstructed reggae version of Cream’s “Sunshine of Your Love.” And there is perhaps the best cover ever of the Stones’ “Satisfaction,” which Steve and I recorded over 20 years ago. If anybody can find this long lost recording please let me know!

I used to love to see the audience’s reactions, the delight that would show in their eyes, when, after Steve had dug deep down into the blues with “Little Red Rooster,” he would waltz into “Que Sera Sera” or steamroll his way through “I’m Getting Married in the Morning.” He was truly one of a kind.

Back then, the night’s performances would always end with a high-power medley of folk tunes for seven or eight minutes, sometimes longer, Steve rocked through “You Are My Sunshine” “She’ll Be Coming ’Round the Mountain” and other folk standards, always culminating in a wistful coda ofÂ  “Irene Goodnight.”

If you want to perform, share your artwork, or simply share in the memory of Steve White, you can check out information about the March 21 festival at stevewhiteblues.com.

FROM THE BEATLES TO BREAKING BAD: Badfinger’s Joey Molland to Appear at Fab Four Fair