February 2023
Vol. 22, No. 5
FROM THE BEATLES TO BREAKING BAD: Badfinger's Joey Molland to Appear at Fab Four Fair by Steve ThornMarch 2015
Jeff Beck: A Tribute by Ted BurkeMarch 2015
Marcus Petronius Bashore: The Best Seat in the House by T.E. MattoxMarch 2015
Pacific Wave: A Surfin’ Safari March 2015
The Winter Dance Party 1959: The Night the Music Lived by Terry RolandMarch 2015
Back with a Bang! Java Joe's Reunion at San Diego Folk Heritage by J.T. MoringMarch 2015
Book Review: The Philosophy of Modern Song by Bob Dylan by Ted BurkeMarch 2015
Rick Nash: Bass Man in Demand by Wayne RikerMarch 2015
Mod Revivalists the Trebels to Reunite for 40th Anniversary Show by Jim TrageserMarch 2015
If Music Be the Food of Love, Play On: Dually Noted Pairs Fine Food and Fine Music by Paul HomiczMarch 2015
Advertisements 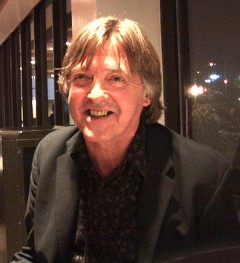 Joey Molland will play with the Dave Humphries Band at the Beatles Fair this year. 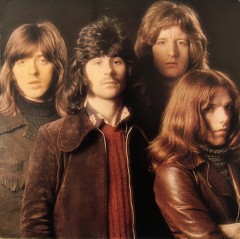 Badfinger in the early 1970s 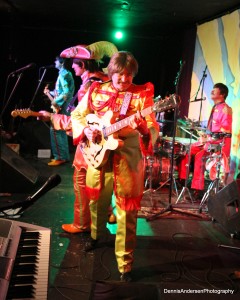 Britain’s Finest will take the audience on a musical journey, complete with costume changes

Tons of Beatles memorabilia will be available for sale at the Beatles Fair. Photo by Dennis Andersen. 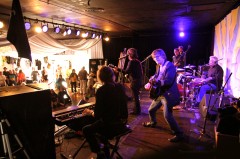 It was a popular culture moment, saluting a song from bygone days. In the series finale to AMC’s Breaking Bad, character Walter White’s death by misadventure is captured by an aerial shot as police cars arrive on the scene. Providing the musical accompaniment as the screen fades is a 1972 song by a group of Welsh and English musicians called Badfinger.

From college dorms to the water coolers of corporate America offices, Breaking Bad devotees seemed generally satisfied with the series wrap-up. But for younger fans who were not yet twinkles in the eyes of parents, where did this “Baby Blue” song come from and who were Badfinger? The curious found their answer soon enough on computer screen. Several days after the show, public interest in the band reached an interest level that possibly surpassed the peak they achieved in their heyday. Spotify reported streaming hits of “Baby Blue,” increasing 9,000 percent on the day following the series finale.

If any band is deserving of a reappraisal or musical renaissance, it’s Badfinger. For all their ebullient singles (“Come and Get It,” No Matter What,” “Day After Day” and, of course, “Baby Blue”) the personal tale of the band remains one of the most tragic in rock. Leader Pete Ham took his life in 1975, followed by bandmate Tom Evans’ suicide in 1983. Both deaths were the results of financial pressures Ham and Evans were experiencing due to poor management. Badfinger drummer Mike Gibbins died from a brain aneurysm in 2005.

Today, Joey Molland — the sole living member from the band’s famous lineup — travels the world to keep the musical legacy of Badfinger alive. A native of Liverpool, he came aboard for the group’s sophomore album, No Dice (1970). At the time, the status of recording for the Beatles’ label, Apple, and the open endorsement of the Beatles themselves, actually caused some backlash toward the band. Among the criticism directed toward Badfinger was that the group sounded too much like the Beatles. (Interestingly, the same salvo was fired at the early Bee Gees for being too “Beatle-ish.” No doubt the Brothers Gibb were fighting back the tears as they were crying their way to the bank.)

The “Beatle clone” labeling is now a thing of the past, replaced by the recognition of Badfinger’s rightful place in a brilliant 1970s power pop triumvirate, consisting of Cleveland’s Raspberries (“Go All the Way”) and Memphis legends Big Star (“September Gurls”). Molland will be backed by the Dave Humphries Band at this month’s San Diego Beatles Fair at Queen Bee’s Art and Cultural Center in North Park. Also performing will be Britain’ s Finest, one of the most popular Beatle tribute bands out on the circuit. The band will take the audience on a musical journey to a world that never existed: live on-stage renditions of songs from Sgt. Pepper Lonely Hearts Club Band and Abbey Road. Costume changes will show the fashion evolution of the Beatles from moptops to psychedelic icons to Bohemians. Other acts who have committed at press time include the Baja Bugs, Bart Mendoza and True Stories, Rhythm and the Method, and the current generation of talented youth from the School of Rock.

On the literary front, Beatle author John Borack (John Lennon: Life Is What Happens) will be making his annual trek south from his Orange County home base. Borack is the producer of a new multi-CD tribute to Elvis Costello, one of the few post-Beatle era songwriters who was inspired — not intimidated — by the Lennon-McCartney catalogue. “Beyond Belief: A Tribute to Elvis Costello features covers of two tunes that Elvis co-wrote with Sir Paul McCartney: David Myhr’s bright ‘n’ shiny version of ‘Veronica’ and Paul Myers’ wonderfully brooding, slightly psychedelic take of ‘So Like Candy,’” said Borack. “All proceeds from the sale of Beyond Belief will benefit the Mr. Holland’s Opus Foundation, an organization that works to put musical instruments into the hands of children in schools located in underserved areas of the country. Both Elvis and Paul donated the rights to use their songs in order to support our charitable endeavor.” Also appearing will be Troubadour contributing writer, author, and musician Jon Kanis. His Book, Encyclopedia Walking: Pop Culture & the Alchemy of Rock ‘n’ Roll, features several Beatles-related chapters on Tony Sheridan, John Lennon, George Harrison, Yoko Ono, and Ravi Shankar. “I’ll do a couple of songs acoustically that relate to the stories being told,” said Kanis.

Although paid admission will be required inside Queen Bee’s center, there will be a no-cost, carnival-like atmosphere out on Ohio Street. The Queen Bee herself (Alma Rodriguez) considers the San Diego Beatles Fair to be “an annual event meant to promote and preserve the Beatles sub-culture for future generations. It is a great event that draws people and families from all over the County of San Diego to North Park to experience the fair as well as our neighborhood. That is always a great opportunity to gain new customers. The event taking place on the actual street will be free and open to the public.”

Showing the Love: Friends of STEVE WHITE to Gather for a Day of Art and Music