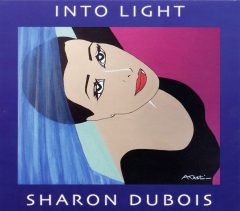 Into Light is nothing if not wildly ambitious. At times, it sounds like three different records, which both adds and detracts from its ultimate coherency. At its core–the subject matter relates mainly to affairs of the heart–where DuBois seems to wince from a series of painful memories–trying to work through the hurt into a more therapeutic sense of wisdom

The album begins with the fusion-esque “Shades of Blue,” where a sprightly Latin feel morphs suddenly into slap-bass funk then back to reverberant electric piano as DuBois navigates between longing for a “big-strong-man” and celebrating the independent story of a woman who “only cooks for one.”

“Forgive Me Please” showcases the dual basses of McBride and Dresser and the violin of Oliver pulsing through a constantly shifting time signature of 8, 7, and 9 beats and a chaotic narrative that doesn’t seem apologetic, regardless of the title.

A favorite moment occurs on a piece DuBois wrote with the late Daniel Jackson, “Flux,” a dark noirish blend of mystical lyrics and smoky atmosphere–courtesy of the wailing saxophone of Person and the woody groan of McBride–who sounds like leviathan.

Staten’s feathery brushwork pervades the groove on “Ocean,” where DuBois comes off sounding like a boozy, brassy Nanci Griffith. This tune represents another highlight moment–mostly because it connects directly to the jazz tradition.

Both bassists return for “Hiding Behind Jesus Doing the Devil’s Work,” churning up a wicked martial cadence for the DuBois vocal and the double-tracked trumpets of Cannon (which reminds me, somehow, of the horns in the Johnny Cash/ June Carter classic “Ring of Fire.”)

The title track is haunting and elegiac. Dedicated to the memory of drummer Nicki Carano, who left this planet way too early–the simple trio of Staten on cajon with Carano’s layered arpeggios and DuBois impassioned outreach makes for memorable music, indeed.

I also enjoyed “If You Were Mine,” which seems to be the perfect vehicle for the plaintive voice of DuBois (remarkably free of artifice) and the band–especially McBride, whose solo clings to the ear.

MATTHEW HAYNIE: You Were Where I Wanted to Be