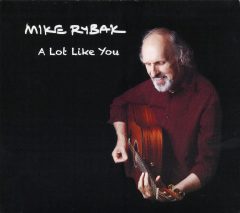 Mike Rybak is a roots singer/songwriter whose songs vary from soft and personal acoustic folk pieces built upon his eloquent guitar playing to soft rock and breezy pop-jazz, with stops in between. His engaging voice is perfect for the intimate approach of so much of the material on his debut CD, A Lot Like You. The album was produced and arranged by Craig Pruess, who has played on, arranged, and produced numerous albums and soundtracks in Britain for decades. The result (some recording was done locally as well), is absolutely pristine.

The 14-track program opens with “That Thing You Felt,” an intriguing tune that, like many here, features Rybak’s delicate fingerpicking, then shifts with piano (Pruess) and drums into verses that have more of a toe-tap rhythm as he sings: “The love you knew/ Is always inside of you/ Deep as the ocean.” The metaphysical lyrics float as he hums the last verse of a tune that takes its time. Rybak fronts a full rock outfit for “Between the Lines,” and the grinding electric guitars notwithstanding, his earnest folkie vocal delivery doesn’t quite carry enough octane for this kind of thing. No biggie, since “The Journey” is up next, just him and Maria Luiz Roca right at home on a beautiful folk duet, with his guitar and flute along for decoration.

The title track captures some funk and jazz vibes, as a bass and acoustic guitar hook work with the percussion to lift the arrangement. It adds up to a highlight that makes Rybak and his lyrics about transcendence soar. “Johnny Wonder” is given another lift by a big arrangement, a nod to Paul Simon with great percussion propelling it forward, the African beat and backing vocals are the closest thing on the disc to World Music.

The disc is a generous 53 minutes, as Rybak has included a lot of music and no song is short or perfunctory. “Today” is an example, a personal folk song about his struggle, given depth by Pruess’ percussion and reverb and a couple of haunting trumpet fills; it lasts over five minutes but doesn’t seem too long. Rybak scores with a lightweight, jazzy ballad on “Anything Less Than Love.” It is up-tempo and catchy: “Eyes are on the road ahead/ It’s calling out to you in the distance/ what you dare and what you choose.”

“Money to Be Made” is the most interesting and probably most creative track on the album. Told from the viewpoint of a whaler, Rybak makes a great storyboard about the hunt on the water, where: “The first shot’s for keeps and the blood turns the water to wine/ The silver and gold, if you do what you’re told, come payday you’re doing just fine.” The production makes this another highlight, as flute and keyboards create whale sounds and hammered dulcimer helps make the sound drip with water. The disc wraps with “Evening Is Falling,” a soft child’s lullaby, and an ideal way to close this album of Mike Rybak’s endearing music.