Does anybody remember that ploy in the 1980s? Sophomoric solicitors would post a flyer on a bulletin board at a college, coffee shop, or club with the above headline in large type. Then in smaller lettering (when you just had to keep reading) you got the sales pitch: used toaster for sale, roommate wanted, cheap textbooks, need a drummer who can follow orders.

“The state of the American restroom? Well, it’s evolving,” architect Kathryn Anthony, who is vice president of the American Restaurant Association, told CBS news. “There’s great room for improvement… in this era of COVID.”

As we’ve all seen, there has been a plethora of COVID safety products as well as newly focused attention on “old standards,” such as toilets. In fact, we are experiencing a new renaissance of invention, partly due to necessity, partly due to sheer boredom. We honed our prehensile skills with the COVID haircut in March/April. Now, we’re taking that hitherto untapped manual dexterity and whittling, tinkering, tweaking, and sculpting like never before. So be on the lookout for every newfangled contraption, widget, and novelty imaginable. My bets are on the Chia Pet Murder Hornet! 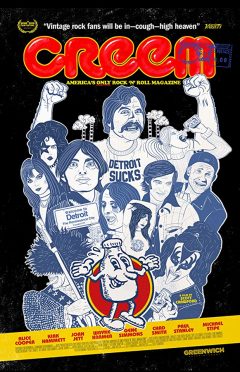 This sudden need to tinker has produced a boom in DIY creativity. As major projects from the big studios and labels have found themselves sidelined, everyone with a video camera and access to live streaming is able to post original music, podcasts, readings, lessons, and performances.

There is a lot of “content” being released, too. One indie film that stands out is Creem: America’s Only Rock ‘n’ Roll Magazine. This new film doc chronicles the glory days of the rock ‘n’ roll magazine, most specifically that renegade mag out of Detroit.

According to former Creem writer and editor Jaan Uhelszki, “Creem… was a group of people who didn’t belong anywhere else but with each other. Did we like each other, especially? Were we friends? Not really—at least not in the beginning—but we were all united by a single idea. We were all fanatical about rock music and somehow believed it had the ability to connect us to something bigger than ourselves.

“Making the documentary with JJ Kramer [son of Creem founder Barry Kramer] and director Scott Crawford allowed me to time travel back into my own past and extract the steps that allowed a bunch of unruly people to make something out of nothing with sheer will, raw talent, and a fearlessness. At the time, I didn’t think we were making history but now I know were.

“Could there be another Creem magazine? Not in the same way. What was shocking in the ’70s and ’80s isn’t shocking or revealing now. I think in hindsight I am surprised what we got away with, from getting Elton John to lie down in a pile of 45s, to persuading Leslie West to let us bury him completely in White Castle hamburgers, to daring Grace Slick to bare her breast [she did it twice], to not only convincing KISS to be photographed without their makeup but then convincing them to allow me to perform on stage with them in make up, to Susan Whitall handing over the keys to her car to Ted Nugent for a whirlwind ride through the Michigan hinterlands and being sent home with 15 pounds of venison for her troubles. But maybe the most shocking thing is the truth and, I think at the core of what Creem was, was unstinting in its belief that you had to be authentic, say what you really felt—even if you loved something unfashionable. It’s how you talk to the tribe.”

Film director Scott Crawford adds, “Making a film about Creem was a lifelong idea that I had. I grew up reading it front to back and it changed the way I listened to music. So, for me, making the film was personal. It’s the ultimate underdog story. From its humble beginnings to its heyday in the 1970s [as the number two music magazine to Rolling Stone], it was a magazine that made its own rules and answered to no one. In the process, it changed the face of rock journalism and inspired a new generation of writers. I can’t think of a music magazine that made a bigger impact.”

SINGING FOR YOUR SUPPER (GETS OLD)
Ah! The romantic vision of troubadours, minstrels, and folk singers merrily riding the rails and hitchhiking down the highway, stopping to belt out a few tunes at a diner or juke joint in exchange for something to eat. Unfortunately, many artists, creatives, and musicians are finding out the hard way that living meal-to-meal isn’t quite as enchanting as the fables portray.

When COVID first hit, we interviewed several local musicians and artists to see what they were doing to make a living while “live” performances and simple things like band practices, were completely forbidden. Here’s how some of them are doing today. 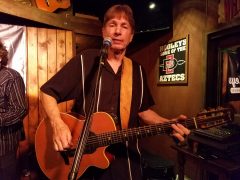 “Lifelong musicians like myself learn fast that there will always be tough financial times. We tend to drive older cars and stay out of debt. I have been blessed with lots of gigs through the years, In high school Jerry Raney and I had Thee Dark Ages, which scored a nice house band gig at the teen club called the Hi-Ho Club. Glory worked tons in the ’70s, Bratz played about 25 days a month in the early ’80s, and Private Domain stayed very busy and even got on the radio a bit in the late ’80s. But in the early ’90s things had gotten really slow, especially since we did not pursue the corporate event lame song list direction. Just when things looked bleak, Private Domain started a house band run at Dick’s Last Resort downtown that lasted 22 years! Since then we have still gotten gigs, but not as often. Plus, I had been staying busy by playing in multiple bands at the same time, always making sure there were sub players available to cover for me when necessary. There always seemed to be a gig on the horizon, but these days that horizon is distant.”

Matthew Taylor (drummer)
“I continue to teach from my studio in Chula Vista virtually! I’m up to 16 students, which is pretty good during the summer months for me. I even have a student on the East Coast now from my old Boston connections. Of course, I miss performing!”

Patricia Herrington (dancer and dance instructor)
“I feel like one of the lucky ones… I am living in Oregon on a farm and doing chores! I wear a mask when I do have to shop, the rest I buy on Amazon. I’ll be starting my Zoom lessons next week. I’ve gotten a few students that are interested so that will keep us connected and moving. On a personal note, I watch the news every night and it’s like living in the Twilight Zone. How did we get here? How and why are we allowing this corruption in our government to continue? Dark thoughts.” 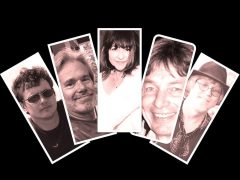 Andi McKay with the Love Is a Rose Band.

“Because of the lockdown restrictions, we were only able to rehearse once as a group. We are trying to find a large rehearsal space and may have found one in Vista that will allow us to distance while rehearsing. I have to admit, I experienced a little bit of depression about not being able to move forward with the band and it took away my incentive to want to sing for a short while. And I know that other musicians have felt the same. I did feel a little encouraged after going to the Valley View Casino to see a band perform for the first time in many months. It sounds like the casinos are going to start booking bands again. I think it’s getting difficult to be optimistic but being able to continue to do music remotely with my family and with other musicians has helped!”

DO I STILL HAVE YOUR ATTENTION? 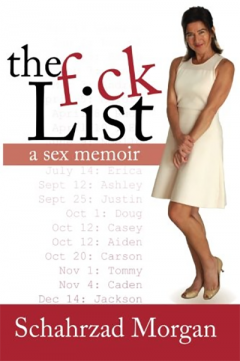 Sexuality may be our last frontier. Believe it or not, we understand a great deal about the physical universe, right down to the 12 quarks, 12 leptons, five-gauge bosons, and the Higgs field that form our material, spatial existence. We understand the cellular, genetic makeup of Life and the human body. And we understand basically how and why our species, homo sapiens, behaves the way it does.

However, we’re still trying to figure out all of those urges, fears, fantasies, and fetishes that spin around in the deep recesses of who we are, each individual with his or her slightly unique combination of these psychological “motivators” and impulses. As Freud would remind us, these individual idiosyncrasies develop in tandem with what we might collectively call our “sexuality.”

Living in an era of social distancing has definitely put a damper on our abilities to express ourselves in an open, honest way.

Schahrzad Morgan is an escort. She’s actually many things: Author, business woman, and former housewife. But, in her 50s, she made the bold career move to become an escort.

After a successful career in real estate, and after her marriage ended in 2013, Morgan branched out on her own. She wrote her memoir, The F*ck List, about a newly single woman trying to date and find sexual passion at an age when society might say she should be concentrating on being a good grandma. Her follow up books Permission and What I Did for Sex, continued to chronicle this journey.

Then, five years ago, she became an escort. She established a YouTube channel and placed ads on websites such as eros.com while establishing her own website: SanDiegoGirlNextDoor.com. Also, she continues to post exercise videos and other life tips on her Facebook page.

Then, COVID hit! “I was busy the first months,” she says. Amazingly, a lot of younger guys were setting up appointments, amazing because men in their 20s usually can’t afford her $400 per hour rate. These younger clients replaced the business travelers and more mature gentlemen.

By June, however, the steady stream of dates ground to a halt. As Morgan puts it, “I went from 8-15 clients per week to five.” Businessmen aren’t traveling like they used to. Money has become tight, especially for the 20-somethings. And more men are simply staying home, in lockdown, with their families.

But after a tough two months, things are picking up again. “Many men want a mature escort,” Morgan adds, “someone they can talk to, someone who’s not just arm candy.” She is 58 years old and wants all women to know that they don’t need excessive makeup, cosmetic procedures, and implants. Every woman should be confident with who she is.

The escort business “works based on attraction,” she explains. Morgan is proving that women are still attractive well into their 50s and beyond.

Always a people person, Morgan also works as a personal coach. Using the techniques of John Welwood, a pioneer psychotherapist who mixed Buddhism with western psychology, Morgan has developed a sturdy client base. She conducts her sessions on the phone, listening to people’s problems. Often, her clients are people like her, people in their mids working through various levels of anxiety and sadness. “I use a technique called “feel the feeling,” Morgan says. This involves the client digging deep to reproduce the original pain of the situation. Once the person can feel the feeling, then he or she can learn to overcome it.

Dreaming in the Time of COVID