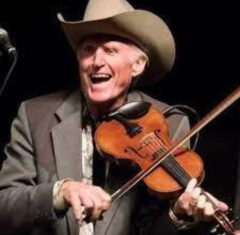 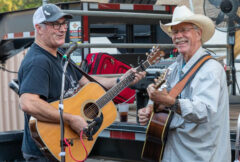 Pick-up band on stage at the new SDBS second Tuesday jam session at the Mainstream Bar & Grill in Poway. Photo by David Cupp. 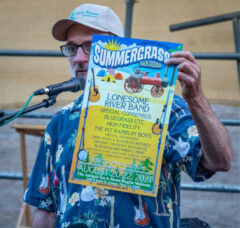 Summergrass will be in Vista August 20-22 this year.

The sad news is that Byron Berline, fiddler extraordinaire, and John Hickman, outstanding banjo player, have both passed away. Byron Berline died from a stroke at age 77 in July and John Hickman left us in May after a long illness. Byron and John were long-time compatriots, playing together in a number of great bands over the years, including Berline, Crary, and Hickman. Both had performed on several occasions at Summergrass and were well known in San Diego bluegrass circles. They will be missed, but their mark on our music will be remembered.
he great news is that live bluegrass is back in San Diego! The SDBS held its first live second Tuesday event on July 13th at its new venue, the Mainstream Bar and Grill in Poway. Good food, lots of free parking, friendly service, and outstanding pick up bands on stage and informal jamming marked the evening. Also, the Thursday Night Pickers are again meeting every Thursday, live, in Encinitas at the Round Table Pizza from 6:30-9pm. Also, the North County Bluegrass and Folk Club is firing up its first Tuesday of the month live events at the Round Table Pizza in Escondido from 7-9 pm.
Summergrass is Finally Here! August 20-22. August is the month we all look forward to, as it brings the Summergrass Bluegrass Festival to the area. Hosted at the Antique Gas and Steam Engine Museum in Vista, Friday through Sunday, Summergrass has it all. Great national bands (Lonesome River Band, Special Consensus, Po Rambling Boys, Bluegrass, Etc., and more) as well as local bands, workshops, a Kids Music Camp including a main stage performance on Sunday, an Adult Camp, onsite camping, vendors, and more jamming than you can shake a stick at!
There’s lots do beyond the music too, to keep the whole family happy. More steam engines and tractors dating from 1850-1950 than you can imagine, a period schoolhouse, blacksmith shop, and the largest collection of weavings on the West Coast, among other attractions. Read about it all and get your tickets at: www.summergrass.net