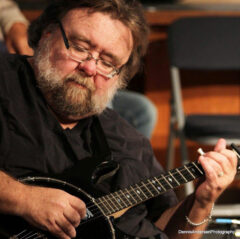 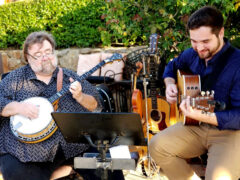 Dennis with his son Zach.

San Diego has lost one of its bluegrass anchors. From Vista, California, Dennis Caplinger , who died last month at age 57, was a virtuoso and Grammy Award-winner. He began playing drums when he was just four years old and took up bluegrass music at the age of 12. A few years later as a teen, he began playing professionally with the budding band Bluegrass, Etc., a group he performed with until his death.
Dennis Caplinger was a true multi-instrumentalist. He played, recorded, and performed at the highest level on fiddle, mandolin, guitar, resophonic guitar, bass, piano, and percussion instruments. He is well known for the CMH Pickin’ On series, which featured Dennis and included tributes to Eric Clapton, Santana, Creed, the Rolling Stones, Led Zepplin, Bonnie Raitt, Jim Morrison, Queen, Neil Diamond, Dave Matthews Band, R.E.M., ZZ Top, Lynrd Skynrd, Black Crowes, Phish, Dolly Parton, Brooks & Dunn, Lonestar, Lee Ann Womack, Jo Dee Messina, Tim McGraw, Montgomery Gentry, Clint Black, Tracy Byrd, Counting Crows, Indigo Girls, LeeAnn Rimes, and Rod Stewart.
Dennis was also a sought after sideman, contributing to many recording projects in San Diego, Los Angeles, and Nashville. His discography includes sessions for Eric Clapton; JJ Cale; One Direction; Vince Gill; Chris Hillman and Herb Pedersen; Dan Crary; Byron Berline; John Reischman; MCA artist Jann Browne, for whom he produced Count Me In; Kevin Welch (Warner Brothers); Kelly Willis (MCA); Ray Price; Rita Coolidge, as part of the female trio Walela; Buck Howdy; and many San Diego-based artists, including the former Padres baseball player Tim Flannery; award-winning Americana artist Eve Selis, Georgia-born singer-songwriter Barbara Nesbitt; American fiddle rock band Lexington Field; and Louisiana-born Ron Steven Houston, among others.
Need more? Dennis has authored three books in the Ultimate Beginner series, teaching the banjo, guitar, and mandolin, with added DVDs. Other credits include work on The Complete Idiot’s Guide series, one for banjo and another for mandolin, and frequent contributions to Banjo NewsLetter magazine.
Still more! Dennis recorded on a number of film soundtracks including Back to the Future III, starring Michael J. Fox (1990) ), El Diablo (1990) ), Rio Diablo, starring Kenny Rogers and Travis Tritt (1993), Midnight Run to Oklahoma; Steven King’s horror/thriller Apt Pupil (1998) ), and the Western/comedy A Million Ways to Die in the West (2014) among others; Caplinger  played mandolin with the ons tage band in the Steve Martin-Edie Brickell Broadway stage musical, Bright Star (2014). Dennis is a featured artist in the documentary Banjos, Bluegrass & Squirrel Barkers (2016), and played banjo and reso-guitar in When to Die, a feature-length documentary about the history and culture of Civil War re-enacting (also 2016).
Dennis was a sought-after music teacher as well. Among his other many achievements, he taught Sara Watkins of Nickel Creek to play bluegrass fiddle and mentored this great group. Notwithstanding his stature in the music world, Dennis was and always remained a home town San Diego boy who could be counted on to support local bluegrass events and musicians. He was a regular at SDBS events, as well as at North County events, and enjoyed performing with his son Zach, an outstanding guitar player on his own. He taught many workshops at the local Julian Bluegrass Festival, and later at Summergrass.
Dennis will be missed, but the music he left behind and the people he touched will warm the hearts of bluegrass lovers forever. San Diego and the Troubadour are proud of a homegrown star we were privileged to call “friend.”
SUMMERGRASS: What a Weekend! 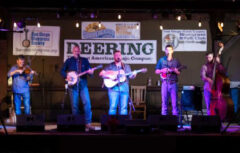 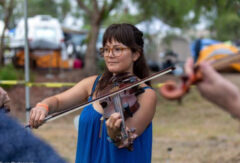 Sara Watkins of Nickel Creek was at Summergrass. Photo by David Cupp.

After skipping 2020 due to Covid, it was great to see the Summergrass Bluegrass Festival back in Vista over the weekend of August 20-22. Attendance was strong, the music was outstanding, the weather cooperated, and many folks went home with tired fingers from all the jamming. There were lots of regulars, some who have attended every festival since inauguration in 2003, but also many first timers enjoying the chance to get out.
The stage shows were outstanding as were Kids Camp and the Adult Music Camp. Music vendors and other sellers were on site, instruments were raffled for good causes, and excellent food was provided by a food truck. There was sadness too, however, as the event mourned the passing of long-time local bluegrass legend, Dennis Caplinger who died on August 14 at age 57. His band, Bluegrass Etc. has made more Summergrass appearances more than any other band over the event’s 19 years, and was on the bill for this year. Rick Farris of Special Consensus graciously filled in for Dennis.

Sad News and Great News: The Yin and Yang of Bluegrass Music.