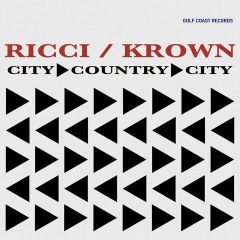 Jason Ricci is easily one of the greatest blues harmonica players in the world, a master of the difficult “overblow” technique that allows this New Orleans-based musician to produce full chromatic scales on a modest folk instrument that’s usually limited to the diatonic range. Briefly, through modification of the harmonica reeds and practiced application of novel approaches to embrochure, Ricci transcends the limits of blues structures and improvises with a particular complexity, brilliance, and melodic invention that brings his playing closer to a good number of fleet jazz masters from whom Ricci takes inspiration. Make no mistake, Jason Ricci is a blues harpist with both feet solidly in the tradition of Sonny Boy, Little Walter, Paul Butterfield, or Blind Owl Wilson (of Canned Heat), a gritty player who makes the harmonica howl, growl, yowl, cry, and moan. There’s the sweat and urgency of blues feeling, but one also notices on his frequent extended improvisational extravaganzas a fluidity of ideas, quotes from Coltrane and Django Reinhardt, high-octane bluegrass riffs alternating with Parker-era bebop flourishes, dense chord constructions, and rapid-fire train patterns. Ricci is a supremely fast player, to be sure, making the diminutive harmonica in his harmonica thunder ahead with the instrumental command of a spotlighted lead guitarist or divinely blessed jazz trumpeter.
But like the best musicians noted for technique, speed of ideas, and performance precision, Ricci’s long improvisations are master classes in solo building; he builds mood with a few notes, a partial duplication of the melody, and then ventures forth, filling out the ideas, playing on, before and after the beat in playful investigation, surely moving toward a wondrous and prolonged stretch of cadenzas that deconstructs and reassembles the composition at hand. It’s the stuff of wonder to behold Ricci start with bluesy aggression before eventually venturing off in various musical side roads to see if he can produce musical moments that no one expected. Classical phrases, jazz chromaticism, fleet bluegrass pentatonics, hard power-trio blitzing, and softer, lyric acoustic interludes are the elements this player has mastered and that give his harmonica power. Ricci, incidentally, played on Johnny Winter’s Grammy Award-winning album Stand Back in 2014, was invited by former David Letterman band leader Paul Shaffer to play on “Born in Chicago” for the Rock ‘n’ Roll Hall of Fame induction of the Paul Butterfield Blues Band in 2015 (broadcast on HBO), and has released 12 albums with several musical alliances including the scorching New Blood, with singer-songwriter J.J. Appleton, and most recently with the visceral Bad Kind. For all the virtuosity, fury, and willingness to manically mash together disparate styles into an improvisational level few harmonica players rise to, Ricci reminds me less of other master harp players and more like Larry Coryell, the pioneering firebrand guitarist who passed away in 2017. Coryell, known as the “Godfather of Fusion,” was the first guitarist in the early sixties to bring a distorted, screaming hard-rock intensity to the jazz arena, employing with an easy and exhilarating expertise as he deployed classical, blues, bebop, and country influences in a crazy, feedback shaded style that influenced several generations of jazz-rock guitarists thereafter. Jason takes up Coryell’s mantle on a different and unexpected instrument at precisely the right time of our existence when he can collectively use a bit of delight and wonder in our listening habits.
All that said, Jason surprises us again by stepping back momentarily from the manic tones that are his usual fare and brings now the superb City>Country>City. His partner in this endeavor is organist and fellow New Orleans resident Joe Krown, the sound rear is something of a throwback to an early jazz era of hard-bop, and organ trios, a domain of jazz grooves characterized by a solid rhythm and blues feel, a music grounded in funk. Bolstered by the unfailingly swing and verve of Big Easy drummer Doug Belote, this a trio well grounded in all the traditions; they have all the right moves and add moves of their own to keep this gumbo percolating, popping, and jiving. The title track, “City Country City,” many will recognize as being the instrumental from the band War from their 1972 The World Is a Ghetto disc. The Ricci/Krown reimagining picks up the pace from War’s original smooth and mellow inspiration. Ricci plays the supple intro figure as Krown supplies gorgeous chords, swells, and tones, and each take steadfast, sharp solo breaks over Boule’s tight, on-the-note beats. It’s a terrific hook into a session of remarkably old school, playing with a very contemporary edge. Soon enough, Krown and Ricci give themselves license to show their wares in full on the sexy and savvy strut of “Down and Dirty.” Krown takes the first chorus, blending gospel phrases and swift, skidding runs that make you think of Jimmy Smith in his bluest mood. Ricci then takes up the cause after his partner hands it over to him, making his serpentine harmonica work resemble at times other horn instruments; the angelic high notes of a clarinet, the throbbing undulations of a baritone saxophone, the hard and rapid cadenzas of a feverish trumpet player are suggested. Ricci mixes up the ideas, varies his attack, and modulates his tone and his pacing as the solo progresses through its conventional blues progression. He keeps it intriguing; he brings you in; he keeps on the hook. The tune rocks like nothing else. From the opening bars, a jaunty theme that could be used as a jazz march, drummer Belote keeps things tight and moving along. The record as a whole is a is like this: full of Southern-fried funk, edgy city blues, and jazz fantasias of all sorts. “Jimmy Smith Strut,” “Don’t Badger the Witness,” and “Good Clean Funk” are other highlights from this inspired trio. Jason Ricci is very much the best of the best in the blues harmonica world, and this trio collaboration with the estimable Joe Krown and Doug Belote is a grand place to become acquainted with the grace, power, and beauty of this artist’s playing.