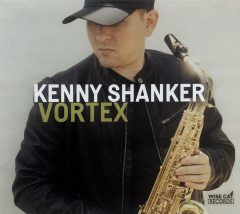 Vortex is the third CD release from jazz saxophonist Kenny Shanker on the Wise Cat record label. The New York City-based performer rotates between alto and soprano saxophones as he riffs effortlessly through seven originals and three jazz standards. He is aptly backed by a quartet of fellow Big Apple heavies, including Mike Eckroth, piano; Daisuke Abe, guitar; Yoshi Waki, bass; and Brian Fishler on drums.
Shanker’s melodies are mostly floating half- and whole-note patterns, building nicely to straight-ahead, cool jazz-era improvisations from Shanker, Eckroth, and Abe on the opening title track, “Vortex,” as well as on “Ramble” and “Midnight Snack,” which also features a melody duet with Abe’s guitar and Shanker’s horn.
Two ballads, “Nightfall” and the 6/8 time “Winter Song,” which features a nice extended bass solo from Waki, both set a calmer mood via the dulcet tones from Shanker’s sax.
“Hunter” is a showcase for Shanker’s command of the soprano sax with lightning flurries of notes reminiscent of John Coltrane’s extended jams over static modal chord changes. “Cinnamon” brings in trumpet veteran Bill Mobley, who lays down silky bebop solo phrases throughout.
Shanker adds in three jazz standards, “The Duke,” “Lulu’s Back in Town,” and “Autumn Leaves” in which he leaves no doubt about his alto saxophone mastery as he breezes through each tune with echoes of Charlie Parker’s immortal riffs. All in all, a thoroughly enjoyable album in the mainstream tradition of jazz anchored by a high caliber group of musicians.

MICAH GRAVES: Pawns: Not for the Ordinary