January 2023
Vol. 22, No. 4
Ramblin’ Jack Elliott: A Living Legend Comes to Town by Frank KocherApril 2016
Examining Bob Dylan’s Love Sick Blues by Ted BurkeApril 2016
John Densmore: An Invitation to Dance on Fire by Terry RolandApril 2016
A Father’s Day Story: The Courtship of Harry Nilsson’s Son, Zak by Terry Paul RolandApril 2016
Jazz 88 Keeps Pumping Out the Tunes: Station persists despite numerous challenges over the years, including Coronavirus by Michael J. Williams and Jim TrageserApril 2016
Me and Ronnie Earl by Eric LiebermanApril 2016
Lawrence Ferlinghetti: America’s Poet by Ted BurkeApril 2016
Q & A with Gabe Lapano: After the Rain and Beyond by Andy RasmussenApril 2016
Remembering Sam Hinton by Paul HomiczApril 2016
Band of Brothers: The Liggins Brothers by Bart MendozaApril 2016
Advertisements 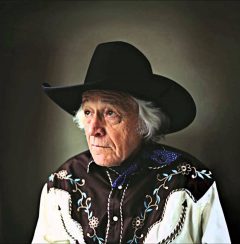 Opportunities to see and hear a legend don’t come along all that often. On April 16, San Diego area folk music fans will get a chance to do just that, when Ramblin’ Jack Elliott appears in concert. A man whose life reads like it was lifted from the pages of a novel and who has been playing folk music for over 60 years, Elliott has played with Woody Guthrie and his son Arlo, as well as such other seminal folk performers as Pete Seeger, Bob Dylan, and Phil Ochs. His influences spread even wider to include American roots performers like Johnny Cash, Bruce Springsteen, Tim Hardin, Kris Kristofferson, Jerry Jeff Walker, and Tom Waits. He has even made an impact on British rockers like Eric Clapton and Mick Jagger.

Elliott is a guitar-picking singer who got started as a Brooklyn doctor’s rebellious son who wanted to be a cowboy; he ran away to join the rodeo as a teen. After a few months, he was back home, but teaching himself guitar with designs on becoming a singing cowboy. Deciding to earn a living busking, he met Woody Guthrie in Greenwich Village and became a student and traveling companion of the immortal singer in the early 1950s. He mastered Guthrie’s material, and his son Arlo attributed his learning of his dying father’s songs and performing style from Elliott, whose first album was 1955’s Woody Guthrie’s Blues.

Elliott’s performances combined traditional finger-picking, harmonica self-accompaniment, and a vocal style described as nasal and strained–it is attributed as being emulated by the young folkster Dylan. He created a persona that featured laconic, humorous storytelling that earned him a nickname. As AllMusic’s Craig Harris describes it: “Despite the countless miles that Elliott traveled, his nickname is derived from his unique verbiage: an innocent question often led to a mosaic of stories before he got to the answer. According to folk songstress Odetta, it was her mother who gave Elliott the name when she remarked, ‘Oh, that Jack Elliott, he sure can ramble.’”

Elliott travelled to Europe, where his first album was recorded, with banjo player Derroll Adams, and barnstormed for several years, strongly influencing the British folk scene and spreading both his and Guthrie’s reputations in the process. Upon returning to the U.S. in 1961, he discovered he now had a considerable cachet in American folk circles. Renewing his friendship with the now-hospitalized Guthrie, he met Bob Dylan, another of Woody’s acolytes. Dylan was sometimes referred to as the “son” of Jack Elliott, because Elliott had a way of introducing Dylan’s songs with the words: “Here’s a song from my son, Bob Dylan.”

He also inspired folksinger Seeger, with whom he toured England in the mid-60s and formed friendships with other notable musicians that included Ochs, for whom he played guitar and sang harmony on his recording of “Joe Hill.” He often performed opening sets at Jerry Garcia’s band’s concerts and occasionally sat in with the Grateful Dead. He appeared in Dylan’s Rolling Thunder Revue concert tour, and his movie Renaldo and Clara.

Elliott recorded regularly until around 1970, then after a lengthy hiatus from the recording studio released 1995’s South Coast, an album that AllMusic’s Burgin Mathews lauded. “The 70-something voice resonates here with the long miles and experience it once just impersonated, the distinctive guitar playing likewise aged into a rich and mesmerizing style. Elliott also reveals himself as one of the few truly enduring figures of the folk era. With South Coast, Elliott’s legend is irrevocably cemented.” Others agreed, it won the Grammy for Best Traditional Folk Album, and, in 1998, President Clinton awarded him the National Medal of the Arts. Elliott has been nominated for five Grammy awards, and also winning Best Traditional Blues Album in 2009 for A Stranger Here.

A special treat for local roots music lovers is the appearance of special guests Berkley Hart. The duo of acoustic singer/songwriters Jeff Berkley and Calman Hart have been a fixture on the local Americana scene since before the turn of the century. They have released eight albums as a duo, several snagging San Diego Music Awards and nominations, including Las Vegas, Crow, and 2014’s Fleur de Lis. They combine smooth harmonies, sharp musicianship, and songs that feature superb observational insights and wordsmith skills. Hart’s heartfelt character studies and Berkley’s absorbing road sagas and amusing stage persona combine for a show that isn’t to be missed.

The April 16 show offers a unique combination of legendary and traditional music, from a veteran who has been there from the dawn of the folk age, as well as a chance to catch the one of San Diego’s best current acoustic folk acts on the same bill. It should be a great show.

Retrospection in “Blue”–Buddy’s Many Hats