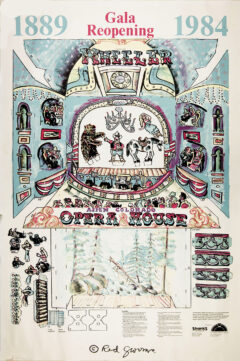 Poster for the gala reopening of the Aspen Opera House. 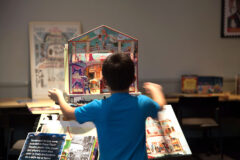 Scott Paulson, talking about paper theatre in a documentary.

During the Victorian Era, London’s playhouses printed fine souvenir posters, which described architectural elements of their theatre. Aspects of set design were shown on the posters, along with representations of actual actors of the company (dressed in costume from a specific production). Condensed scripts were included in these poster kits, and paper doll players were soon seen in lively productions on a tabletop at home, with many aspects of theatre arts being introduced to producers and performers of all ages.
From these posters, families and hobbyists would cut out the proscenium, the curtain, etc., to create a miniature model of that specific theatre. These paper theatre hobbyists ended up learning a great deal about scenic design, lighting effects, sound effects, musical underscoring, acting, directing—all through this paper theatre toy.
Theatre goers often bought these paper theatre posters as souvenirs promoting an actual production they saw. Those living far from the theatre district ordered paper theatres from a catalog and had them delivered to their small town as an educational toy for the household. A lot of cutting and pasting was involved, but hours of educational fun and artistic exploration would follow. The many two-dimensional layers of a paper theatre add up to something with surprising depth and charm.
I encourage you to watch this short documentary celebrating paper theatre, filmed by UCSD-TV for the Library’s Channel to get a better sense of what to expect at this family-friendly virtual event, which is free and open to the public.
Some modern theatres and theatrical venues have recently heeded the call for paper theatre marketing activities, including:
The Glyndebourne Opera House (England)
The Wheeler Opera House (Aspen, Colorado)
Some beloved productions have been issued as paper theatre kits, including:
Edward Gorey’s DRACULA
Picasso’s set design and costumes for the ballet production of the THREE-CORNERED HAT
Today, there are gifted professional puppeteers who utilize aspects of paper theatre in their performances, but paper theatre is not truly considered puppetry and is actually an amateur activity, meant to be done by a household, in a home, with less than a dozen in the audience. UC San Diego Library’s Annual Paper Theatre Festival celebrates this family approach.
The smallest show on Earth is returning this summer with its Facebook Premiere! The UC San Diego Library’s 20th Annual Paper Theatre Festival will feature replicas of Victorian-era paper theatres as well as modern, experimental versions of this re-emerging form of miniature entertainment.
Attendees will meet the makers of these functional miniature stages during the video premier and hear from playwrights involved with these family-friendly theatre art pursuits. Items that are showcased represent 20 years of work by UC San Diego students, staff, and alumni. Look forward to scenes from our past two decades of Festival repertoire, including shape-shifting folktales from Hawaii (with a script written by the UC San Diego PanAsian Staff Association), a children’s tale framed within a South American waterfall, a Cinderella classic, plus a sneak peek of a horror tale in progress, and a steampunk surprise!
No registration is required. Simply visit the UC San Diego Library’s Facebook page at noon on August 17 and enjoy the show! Stick around for a live Q&A with the players and designers after the premiere (an access link will be shared in the comments section). To ask a question, all you have to do is comment on the video at any time during the premiere or Q&A between noon and 1 p.m.
What: 20th Annual Paper Theatre Festival
When: August 17, noon-1pm.
Where: Live streaming on Facebook 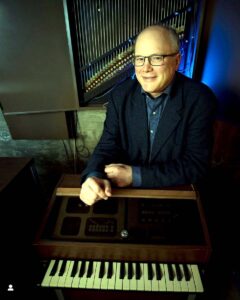 Scott Paulson is a monthly columnist for the San Diego Troubadour. He is the silent film curator at the La Jolla Historical Society, a live radio drama host at WsRadio.com’s “Ether Tale Radio Theatre” and an exhibit and events coordinator at the UC San Diego Library. Paulson is also the University Carillonneur at UCSD, performing commissioned works and fulfilling song requests for the clock chimes atop Geisel Library. As a travelling and performing exhibitor, Scott presents themed shows involving everything from toy pianos to miniature paper theatres to vintage multi-media and electronica-of-interest.
Thanks for reading and considering visiting the 20th Annual Paper Theatre Festival!