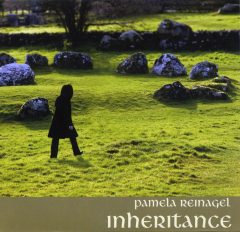 Last year Pamela Reinagel released In the Shadow of the Mountain, an EP of traditional American folk songs sung solo and a cappella. Her presentation had a mournful dignity to it that was uncanny, and she is back with a new EP of traditional English, Irish, and Scottish folk tunes, Inheritance.

The six songs here date back centuries; five of them are from anonymous balladeers, known variously by their numbers in the Child Ballad collection or Roud Index. Reinagel’s approach becomes both a musical experience and something of a history lesson.

“The Flower of Finae” opens, an early 19th-century ballad that is a challenging task, with a lot of half-steps and an overall melancholy tone, but Reinagel is up to it, relating the tale of young Irish lovers separated by war. The tale of “Willie of Windsbury” dates back to 1775 Scotland; Reinagel’s voice captures the scandal of another time and place, painting the scenes about the king’s daughter, pregnant by Willie. Instead of hanging, he ends up offered her hand, as well as to be heir to the kingdom. Being a good Scot, he takes her, but refuses the title. The songs here have become the bedrock of today’s folk music: “Barbara Ellen” has been called the most widely collected song in the English language, played by many folk singers during the folk revival in the ’60s, Reinagel’s version is wistful and sad. Bob Dylan’s “Restless Farewell” is a rewrite of “Parting Glass,” which wraps the disc.

NORMANDIE WILSON: Geography and Other Problems