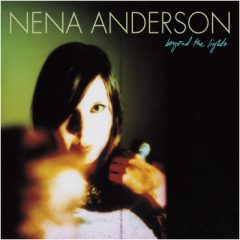 Nena Anderson has been part of San Diego’s music scene since the early 1990s, singing in blues bands, jazz combos, rock and country bands — a partial list includes Brawley, 47Combo, Billy Watson, Blue Largo, and her own band the Mules. Anderson has been the rare Americana singer/songwriter with the versatility to sing on award-nominated local jazz projects with local performers like Johnny Viau and Gilbert Castellanos, while also doing shows singing June Carter’s parts with the Johnny Cash tribute band Cash’d Out.

Beyond the Lights is her debut solo CD, and her ten originals draw from this depth of styles and experience while highlighting a warm, bright voice capable of digging deep and bouncing high. Anderson is backed on the disc by Mule members, including guitarist Mike Butler, who produced and did the sharp work on the boards to create an ace alt-country/pop shimmer on tune after tune. He also takes a lot of solos, but is good enough that these add to rather than distract from the songs.

Anderson starts with “I Fall In Love Too Fast,” locking in her easy vocal authority on a slick pop melody, a good song that sets high expectations for what is to follow. “Daggers” doesn’t disappoint. A bluesy gloom drives the standout cut as Anderson sings a soaring tale about the betraying lover who has driven her away with his evil stare, with a killer lap steel solo by Butler adding a crowning touch. Slowing things down, “Sink or Swim” stays with minor chords and heartbreak. “I smile to keep from crying/Lest I drown in my own tears,” a catchy mid-tempo country tune with haunting pedal steel by David Berzansky (Hacienda Brothers).
The message on “Roses and Kisses” is clear, “They can’t take the place/Of a love that’s gone again.” Anderson is again right in the pocket on a brisk honkey-tonk rocker, and another Butler solo break catches the ear. There is a lot of blues guitar bottom for “Promises” and Anderson’s days belting out jazz and hard blues help her match the band’s intensity; the result is a disc highlight. “One More” is one of those tunes that comes close to being filler, except for an undeniable hook that lifts it.

There are several country ballads on the album, the best being “Hush,” a mother’s lullaby to her child about life and regrets. It is simple, catchy, and lays its story out in three minutes of layered guitars. The title tune wraps the disc, a blues song that has all the smoke and soul of a live performance. Anderson is telling the listener that all she cares about is immersing herself in her music, escaping her life and responsibilities to one that doesn’t extend past the “first few rows.” It’s another winner.

Beyond the Lights gives the listener a rich glimpse of Nena Anderson, songwriter and singer. It’s good, solid Americana music, no clunkers, and a satisfying look at someone who has been on the scene for so long.

ASLEEP AT THE WHEEL & LEON RAUSCH: It’s a Good Day!