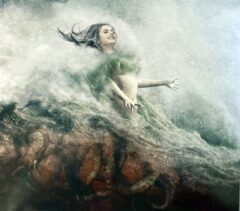 It appears Nathan Raney has reached the heights of serenity in his much anticipated full-length album, Season of Serenity, nine original musical tracks highlighting not only his smooth-as-silk guitar riffs, melodies, and solos, but his adept drumming on eight of the tracks all supporting his often haunting lead vocals on each composition, culminating in beautifully crafted arrangements throughout of instrumental twists and turns weaving around his vocal verses and choruses.
Recorded and masterfully mixed by local music icon, Paul McClendon, Raney brings to life seven tracks from his former band days with Manifold, some of the lyrics co-written with Manifold lead singer, Jared Steffen. The hard-driving title track opens the festivities with Raney’s passionate voice intertwined nicely with syncopated prog rock guitar harmonies with the poignant lyrical message, “A season of serenity… then we grow old…off to uncertainty, cause we can’t know.” Former bandmate Cameron Octon and Raney’s father, Jerry Raney, who also co-produced the album, contribute vocal harmonies on the tune’s choruses.
The two recently written tracks, “Breath Me In” and “Gray,” solely from Raney’s musical pen, give us a strong indication of what we can look forward to from this promising artist. Each tune features strong dynamic volume shifts with rich instrumental harmonized interludes undulating between Raney’s distinctive vocals, channeling some echoes of the late Jim Morrison, along with some tasty bass lines from Frankie Esquibel, who appears on all nine tracks. “Fall to Earth as the ashes spread…gripping the dust, our love never ends… breath me in.”
Raney is not shy about sharing the recording arena with other notable local musicians on this project as Chloe Lou Liddell joins in with her powerful vocal harmony on the catchy tune “Her Body,” capped off with Raney’s ripping finale solo, dialing in some sweet Eric Johnson tone settings, followed by “Bleed,” one of Raney’s fondest authored tunes from the past, which features guest drummer Gregg Gerson along with additional backup vocals from Joey Harris. “Take the best of me, leave my words to bleed… to sail over an endless sea… please stay with me.”
“Apostrophe” and “End of Days” are two solid rockers bringing back the elder Raney and Harris on backup vocals, bolstered by a blistering solo by Raney a la Randy Rhoads. Guest veteran guitarist Steve Cox gets center stage with some omnipresent guitar motifs over Steffen’s lyrics on the tune, “The Sequence,” augmented by Octon and Liddell’s backup vocal parts.
The album closes fittingly with the tune “Closure,” like most of the tracks, pleasantly unexpected rhythmic and melodic shifts from section to section, opening with a mellow instrumental acoustic guitar chordal pattern that transitions into a heavy Metalcore formula finale, putting an exclamation point on the compositional diversity throughout the album, from pulsating power chords to intricate harmonized guitar interludes throughout each track, surprising the listener at every turn, proving that Raney has only just scratched the surface of what’s to come in the future.