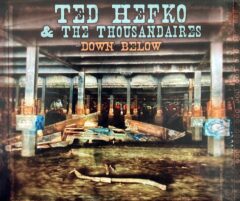 Ted Hefko has been honing his skills as a musician for at least two decades, with an apprenticeship of several years in New Orleans. On his new CD, Down Below, the singer, guitar slinger, songwriter, and sax player, along with his modestly prosperous band, the Thousandaires, dips into the well-dipped-into wellsprings of American pop, southern rock, Americana, and Tin Pan Alley to produce a delightful musical package.
These musical forms have been around for generations, and there is nothing on this disk—no blues lick, pop hook, or jazz inspired line—that I haven’t heard before.
So why do I like the ten songs on Down Below so much? Why was I humming along and tapping my toe to these tunes that Hefko wrote and arranged? It seems that the Madison, Wisconsin native has a talent for finding something new in the blues, country, and other styles that make up his sound. He and the Thousandaires manage to imbue each blues lick, each pop hook, and each earnest lyric with freshness. Playing this CD was like tuning the dial on the radio when I was a kid and chancing on one of my favorite songs.
Hefko can sing with ease, almost tossing off the lines as though they are thoughts that just occurred to him while he picks his guitar and played with the band. It is performers like Hefko and his band mates who are truly keeping popular music alive and relevant in the 21st century.
Recorded last year at the Music Shed Studios in New Orleans, the production and engineering quality varies a bit from tune to tune, with Hefko’s voice getting muddled up with some of the other musical instruments on a few tunes. With over 40 minutes of great music on a well-packaged CD, that may be something to overlook, much as we overlooked such knob turning on the hits of the Animals, the Who, and other bands from the sixties.